the city named after the taro plant

In the blogs and forums I'd read while researching for this trip, hardly any recommended staying overnight at Vigan. I guess it's because, since it's only two hours from Laoag, people would usually plan Vigan as a day trip and go back to Laoag, where the airport is.

But "Villa Fernandina de Vigan" is not a side trip. It's the oldest surviving historic city in the country, dating back to the 15th century.

And I had to see Calle Crisologo at night.


Unlike the Pagudpud bus, our bus to Vigan had AC and a DVD player. But it wasn't pink.

The countryside was beautiful. 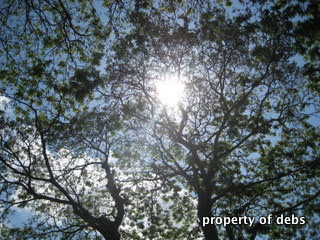 At the bus terminal in Vigan, a tricycle driver tried to charge us 40 pesos for a one-kilometer drive. When we said we'd rather walk and look for a trike elsewhere, he exclaimed, "Bawal 'yan!" (That's not allowed!) We ignored him.

Let me rant a bit. The correct fare was actually 20 pesos. He tried to overcharge us by less than 50 US cents. It's not the money, you know. It's the cheating and the lying-- the "not allowed" bit. And we're not even foreigners. Can you imagine what this guy would try to do with a foreign tourist? As my father said to another cheating/ lying cockroach the previous week, "Ano ka ba? Kapwa mo Pilipino, niloloko mo!" (WTF? Why are you trying to fleece your countryman?)


But anyway, they're not all like that. Kelly our driver in Pagudpud, for example, was a cool guy. Whenever our British friend Hot Tuna comes to our country, he'd say, "Don't try any monkey business and I'll give you a handsome tip." Why not?

Final word: Don't be a tourist. Be a traveler. Which means don't be an idiot when you're traveling, and the locals won't treat you like one.

Back to our story. We went to Vigan Hotel to take a look. Don't. Stay. There. 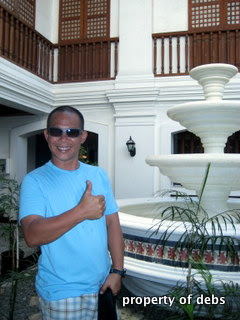 We had a fountain outside our hotel room.
Posted by Unknown at 1:09 PM
Email ThisBlogThis!Share to TwitterShare to FacebookShare to Pinterest
Labels: hotels, ilocos, travel, vigan