A couple of months ago, I bought a discount coupon for a three-course meal at Prince Albert Rotisserie at the InterContinental Manila. (The price was 1,250 pesos, knocked down from 2,500 pesos supposedly, but who knows really?) I had a specific goal in mind-- to eat a hunk of beef after my trip to India.

Oh yes, I went to India. More about that soon.

The Intercon opened in 1969 and is the oldest chain hotel in the Philippines. In the Manila of my youth, Prince Albert had always been synonymous with "fine dining". Nowadays,  it's typically called "old-fashioned".

Well, sometimes old-fashioned is good. Sometimes it's a blessed relief.


Every major city in the world has at least one restaurant like Prince Albert. It's very, very civilized and it positively reeks of old money. Within its walls, nothing ever really changes. Not the food, not the staff. The furniture and decor, sometimes yes, but nothing too modern.

Read the rest of this blog entry...
Posted by Unknown at 1:08 PM No comments:
Email ThisBlogThis!Share to TwitterShare to FacebookShare to Pinterest
Labels: food, hotels, manila

The best thing about our B&B, One Rover's Place, is its location. There are over a hundred hotels and inns in Puerto Princesa, but for exploring the city, I don't think any of them can beat One Rover's Place as home base.

I mean, all the restaurants I wanted to try were within spitting distance. Isn't that what's most important?

Our receptionist recommended Balinsasayaw's grilled chicken for lunch. Not bad for a quick, wallet-friendly meal. It wasn't as tasty as Bacolod's heart-stopping cholesterol-injected inasal but it was much better than Davao's disturbingly sweet and dry version.


We didn't know that balinsasayaw meant "bird's nest" until our waiter, Renger, told us. So then of course we had to order it. For fans of bird saliva, at that price it was practically a steal. And it was obviously very fresh.

Read the rest of this blog entry...
Posted by Unknown at 12:49 PM No comments:
Email ThisBlogThis!Share to TwitterShare to FacebookShare to Pinterest
Labels: food, hotels, palawan, puerto princesa, travel

So what else is there to do in Puerto Princesa?


Well, most people go island hopping at Honda Bay. I'm sure it's very nice, but since I live on an island, I wasn't too excited about doing that.

What really interests me is urban development, and what especially feeds my fire is unusual architecture.


Read the rest of this blog entry...
Posted by Unknown at 11:27 AM 1 comment:
Email ThisBlogThis!Share to TwitterShare to FacebookShare to Pinterest
Labels: art, palawan, puerto princesa, travel

No trip to Puerto Princesa is complete without a visit to the Puerto Princesa Subterranean River National Park. That's the official name, but everybody just calls it "Underground River" or "PPUR" for short.

The PPUR has been a UNESCO World Heritage Site since 1999, but it was only after being declared one of the New7Wonders of Nature that a daily visitor limit of 900 people was imposed. The latter half of 2011, which was the New7Wonders voting period, saw an huge influx of tourists, foreign and local. Undeniably, the Philippine government's enthusiasm for the New7Wonders campaign paid off-- never mind the controversy.

Anyway. About a week before our trip to Palawan, I started communicating with Island Paradise Tours & Convention who recommended that I pre-book the PPUR tour so that they could work on our park permits--no permit, no entry. I thought that 1500 pesos (about US$36) per person was pretty reasonable, considering that it included the two-hour drive to Sabang, the boat rides, permit, entrance fee, lunch and a licensed tour guide. Except for a minor screw-up (they told us to be ready for pick-up at 645AM but didn't arrive until 8AM), I have no complaints.

There were eight of us in our air-conditioned van, from four different hotels spread out across the city. Sabang, a small sitio or village that is the gateway to PPUR, is 76 kilometers from the city center and it's still part of Puerto Princesa. During the long drive, I got to appreciate just how ginormous, sprawling and green Puerto Princesa really is.

Read the rest of this blog entry...
Posted by Unknown at 12:57 PM No comments:
Email ThisBlogThis!Share to TwitterShare to FacebookShare to Pinterest
Labels: food, palawan, puerto princesa, travel

After the Crocodile Farm, Leo took us to Rancho Santa Monica, a.k.a. Mitra's Ranch. Fantastic view of Puerto Princesa. 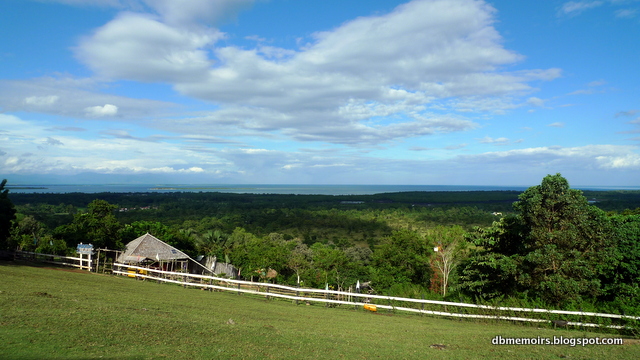 The governor of Palawan, Baham Mitra, actually lives in that spaceship-like house. I find it amazing that anybody can just go there and walk around the property. There's even a zipline and pony rides. We saw a bunch of students practicing for a school play.

Read the rest of this blog entry...
Posted by Unknown at 12:47 PM No comments:
Email ThisBlogThis!Share to TwitterShare to FacebookShare to Pinterest
Labels: art, food, palawan, puerto princesa, shopping, travel

The last time I was in Puerto Princesa was probably a decade ago, and only for an hour or so. I had joined a week-long liveaboard diving trip to Tubbataha Reef and when it ended, it was a ten-minute van ride from the pier to the airport. And that was all I saw of Puerto Princesa.

This time, I stayed for three nights. The first thing I saw at the airport when I arrived on 8 October 2012 was this 'Wanted" poster.


OK, seriously? Dear mamang pulis, do you really expect tourists to encounter these guys while island hopping at Honda Bay or visiting the Underground River? Four million pesos is a lot of money, though. Hmm...

After checking in at our little B&B, One Rover's Place on Rizal Avenue, we walked to Noki Nocs Savory House, just five minutes away, for lunch. The food was served hot and fast, tasted like home and was quite cheap.

I thought about trying their famous halo-halo for dessert, but I really wasn't in the mood. Maybe next time.

kalui: once is not enough

Kalui is undisputedly the most popular restaurant in Puerto Princesa right now. A week before our trip to Palawan, I already decided that we should eat there because of a number of positive reviews on tripadvisor, but I was surprised that even all the locals we talked to recommended it.

In fact, we went twice. The first was for dinner when we arrived on 8 October 2012, and I had such a good time that I immediately made a reservation for lunch on our last day, 11 October 2012.

Yez, it really is "better by reservation", especially for dinner. They have two seatings, 630PM and 830PM, and the place was jam-packed for both on a Monday evening. Lunch is not as busy and of course, much better for photographs.

Read the rest of this blog entry...
Posted by Unknown at 5:33 PM No comments:
Email ThisBlogThis!Share to TwitterShare to FacebookShare to Pinterest
Labels: food, palawan, puerto princesa, travel

For me, the happiest place in Puerto Princesa City is the public market. Specifically the fish section, where I saw almost every edible species that I could think of. Big fish for hotels and restaurants, or small fish for simple households-- there was something for everyone! 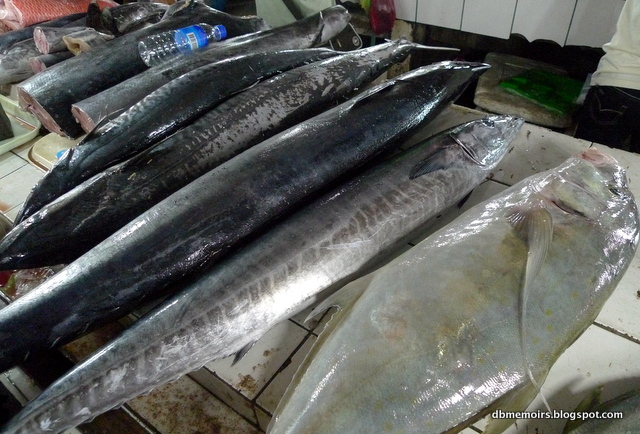 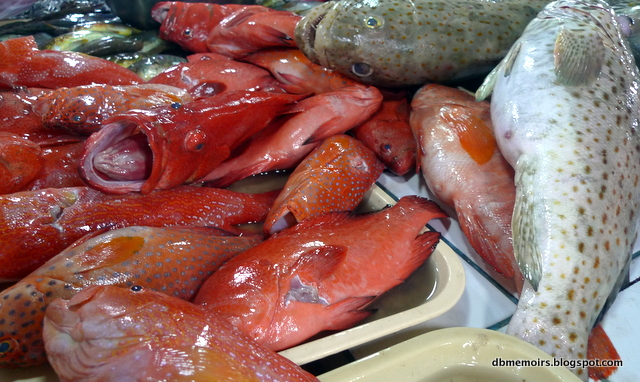 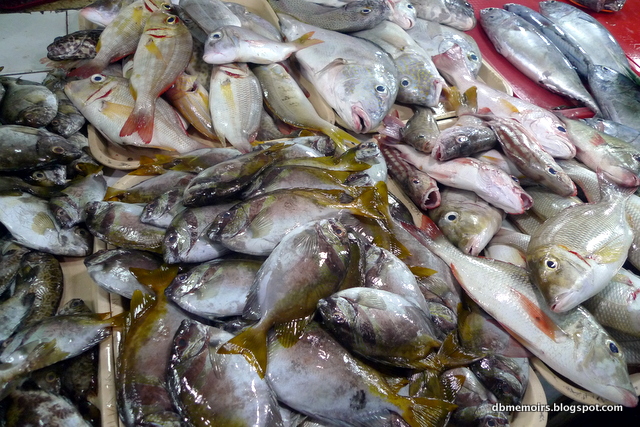 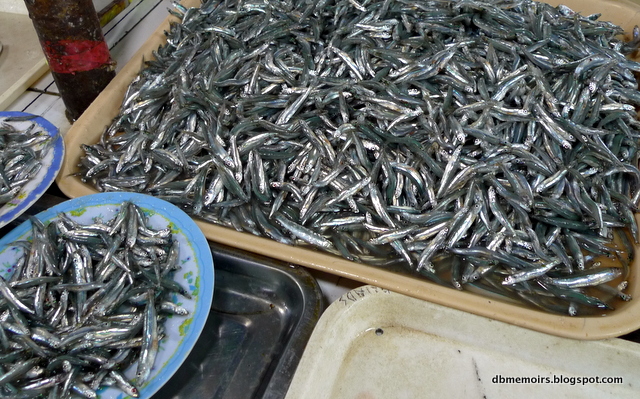