my best meal in seoul

The best meal I had in Seoul wasn't at Pierre Gagnaire a Seoul. It was at Gwangjang Market.

From "Korea Travel Guide" published by the Korea Tourism Organization: Gwangjang Market was the country's first market and continues to thrive as a popular tourist destination to this day. Silk, satin, linen and traditional wedding items like hanbok (traditional Korean clothing) and pyebaek (wedding food that brides prepare for their future in-laws) are available at low prices. Additionally, food carts, especially bindaetteok (korean-style bean pancake) and gimbap (rice and vegetables rolled in laver) are most popular.

As soon as I caught sight of the rows and rows of food stalls, I died a little death. 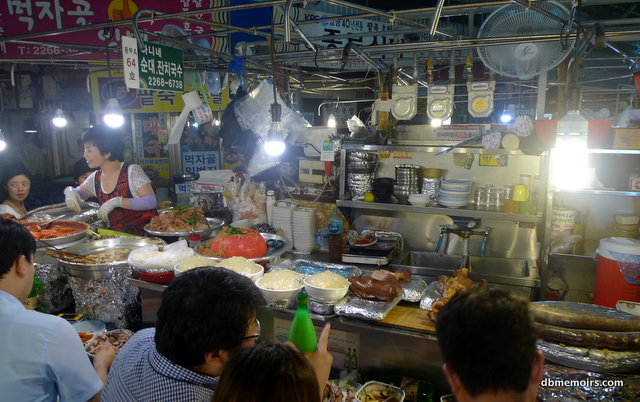 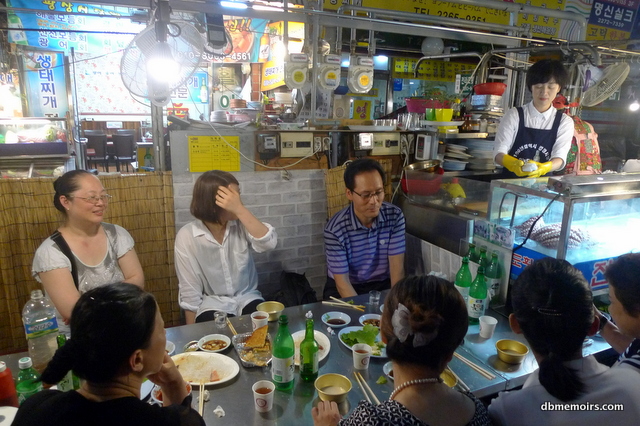 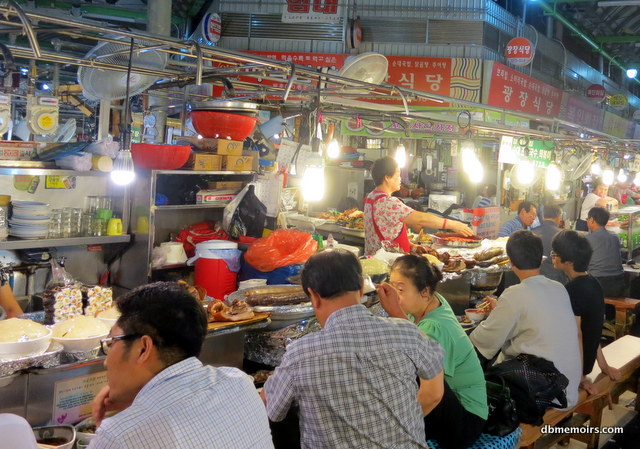 Five of my travel companions turned around and left. ("But it's a market! It's a wet market kind of market! Where are the restaurants?") Ah well, to each his own.

JetLee and I were giddy with excitement. We wanted to try so many things, but we knew that we had to pace ourselves.

One of the stalls had a pile of mandu (dumplings) displayed on the counter. Aren't they beautiful? Notice the shiny, translucent skin. I could literally see the minced meat and chive filling through it. Each golf ball-sized dumpling was a work of art. And so fresh. No frozen stuff here. 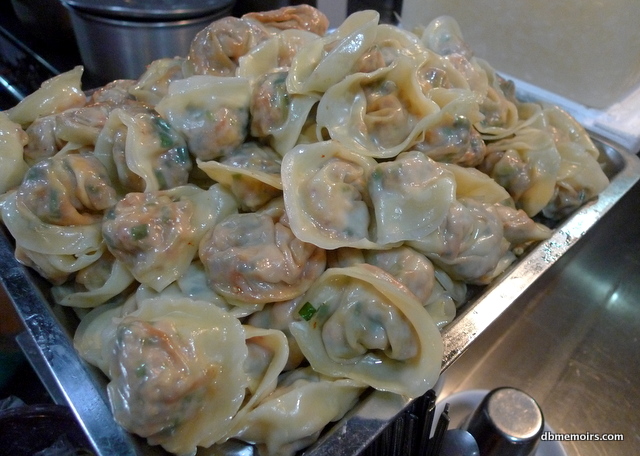 The cook sliced the noodles by hand while chatting with her customers. I wanted to hug her. 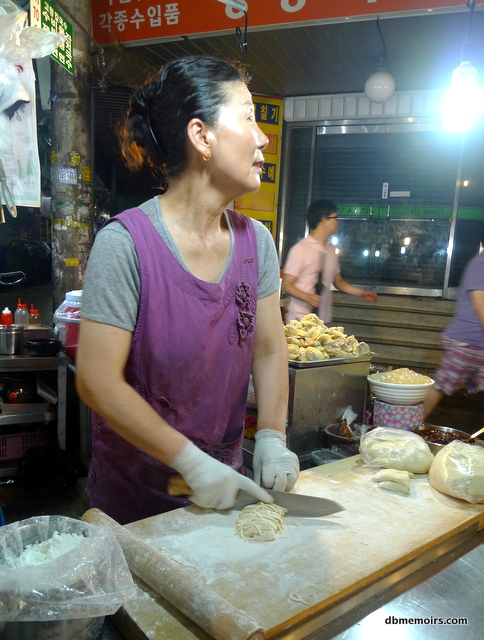 This dish which was a happy marriage between a manduguk (dumpling soup) and a kalguksu (knife-cut noodle soup) was so good, it brought tears to my eyes. The noodles were springy, the veggies were crisp but tender, and the dumplings fulfilled all my expectations. But it was the milky white broth that looked like it had been boiling away in a huge vat all day and night-- that deserved an award. Such a clean, meaty flavor and nary a trace of oil. Better than a Japanese tonkotsu.

Whenever someone asks me about my trip to Korea, this soup is what I talk about first. At 4,000 won (US$3.70) for a huge bowl, it was enough for two people with moderate appetites. 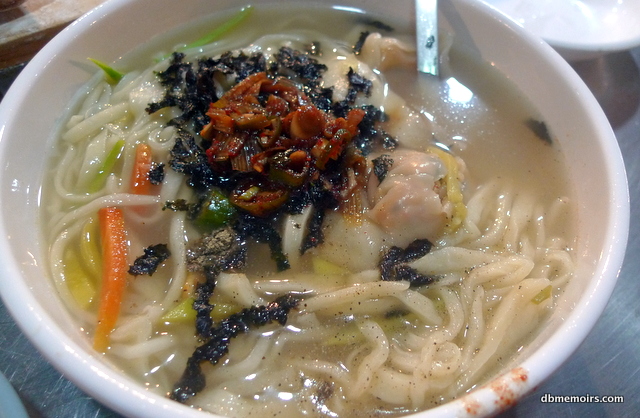 After we wiped out the manduguk/kalguksu, we walked around and espied a japchae lady. Well, how could I say no to that? We sat down and watched the fierce-looking ajumma assemble our order.

(Read about ajumma here and here.) 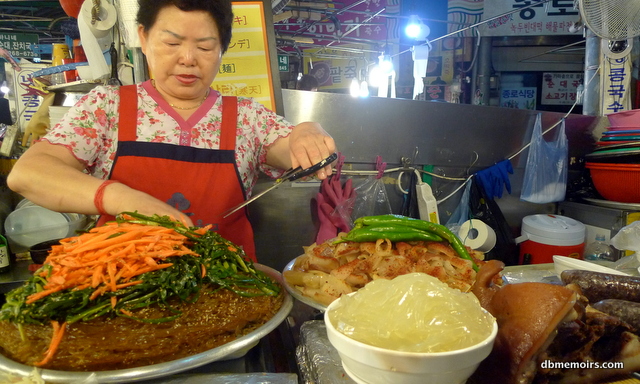 The best japchae I've ever had in my life! Wonderfully chewy, slippery noodles sprinkled with the most fragrant sesame seeds and topped with those delicious chives that are ubiquitous in Korea. So simple yet so flavorful, and only 3,000 won (US$2.80) for a generous serving. The japchae I've had in "proper" restaurants cannot compare. 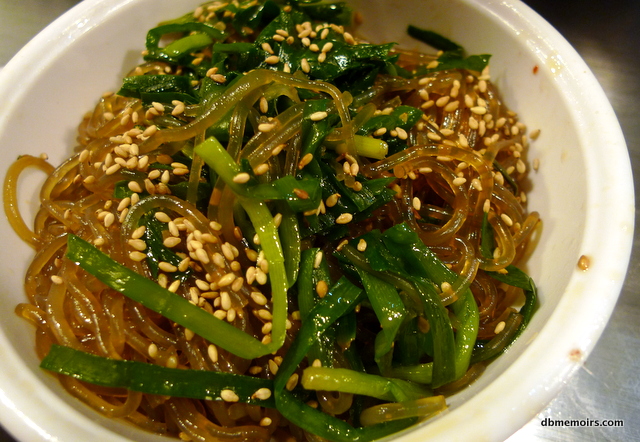 Unfortunately, we were too full to eat anything else. Plus it was almost midnight and I wanted to catch the last subway back to our hotel. If only we had a couple more days in Seoul, I would have gone back for lunch... and maybe dinner again.

If you go to Seoul, you must eat at Gwangjang Market. Otherwise, I will pity you forever.

Gwangjang Market is a short walk from Exit 7 of the Jongno 5-ga Subway Station. They have an official website but it's in Korean.
Posted by Unknown at 5:51 PM
Email ThisBlogThis!Share to TwitterShare to FacebookShare to Pinterest
Labels: food, korea, seoul, south korea, travel