My favorite meal in Seoul was at Gwangjang Market. My second best meal was Korean barbeque.

From Wikipedia: Gogigui, literally "meat + roasting", or Korean barbecue refers to the Korean method of grilling beef, pork, chicken or other types of meat. Such dishes are often prepared at the diner's table on gas or charcoal grills that are built into the table itself. Some Korean restaurants that do not have built-in grills provide portable stoves for diners to use at their tables. The most representative form of gogigui is bulgogi usually made from thinly sliced beef sirloin or tenderloin. Another popular form of it is galbi made from marinated beef short ribs. However, gogigui also includes many other kinds of marinated and non-marinated meat dishes, and can be divided into several categories. Korean barbecue is not only popular among Koreans, but has gained popularity internationally.

Among the many barbeque restaurants in Myeong-dong, Meg chose the one that seemed to be the most popular for our dinner on 18 July 2013. The place was very busy when she passed by in the early evening, but by the time we were ready to eat at 9PM, it was only half-full. Good timing. 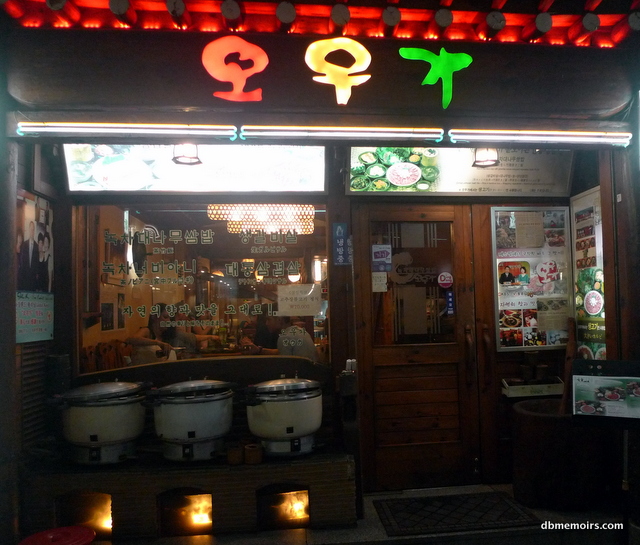 Even though nobody spoke English-- the place didn't even have an English name-- the menu was quite easy to understand. Plus the staff spoke Chinese, as do most of the locals who work in the tourist areas.

We ordered Set A so that we could taste a bit of everything. 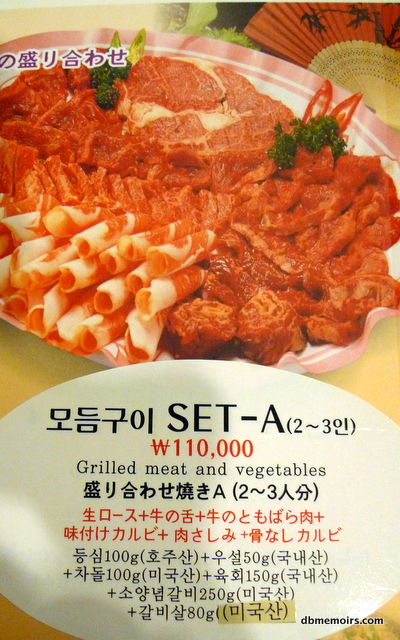 And then we added some more stuff because were were six people and the set was only enough for two or three. 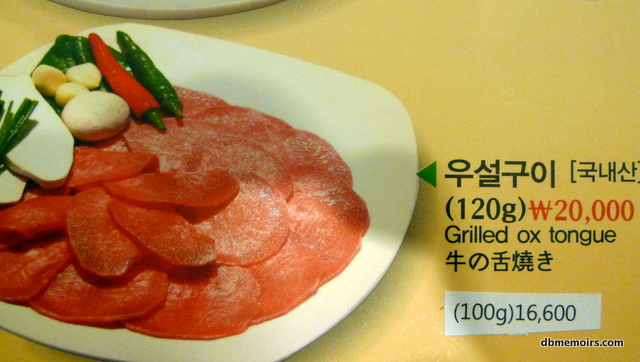 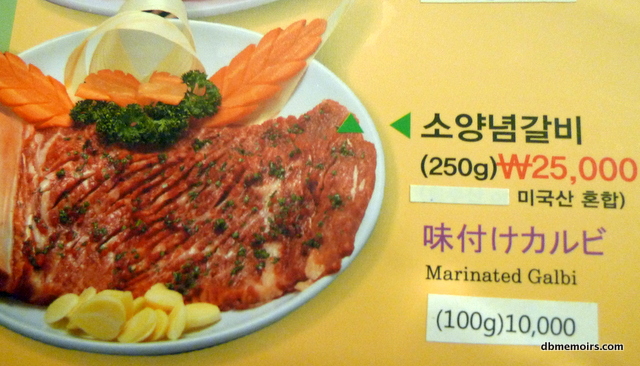 Service was extremely fast. Just moments after we sat down, assorted banchan and plates of leafy greens were plonked down on our table. 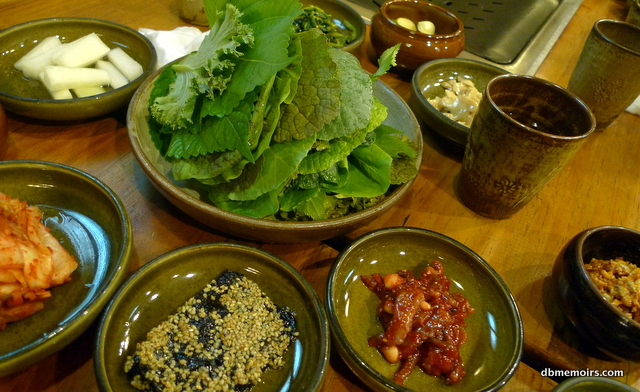 Actually, the service was a bit too fast. The ajumma who served us insisted on dumping all of our meat on the grill pan simultaneously. We practically had to wrest the tongs from her. Koreans aren't big on leisurely meals, it seems. 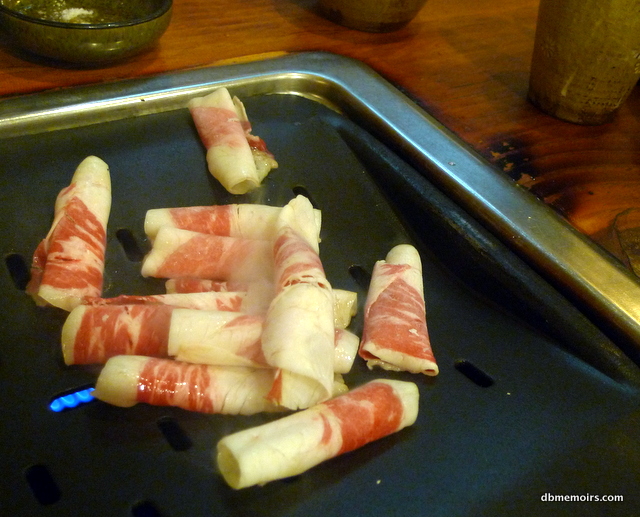 The first few pieces of beef and pork turned out somewhat overcooked because we just couldn't gobble them down quickly enough. But after we took control, we were able to relax and take it slow. 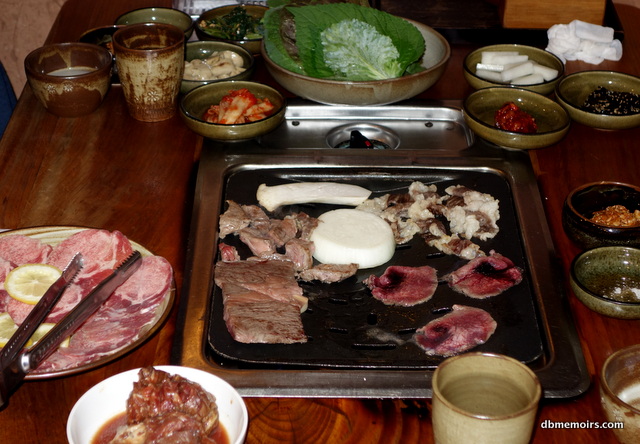 We had some makgeolli to wash it all down. 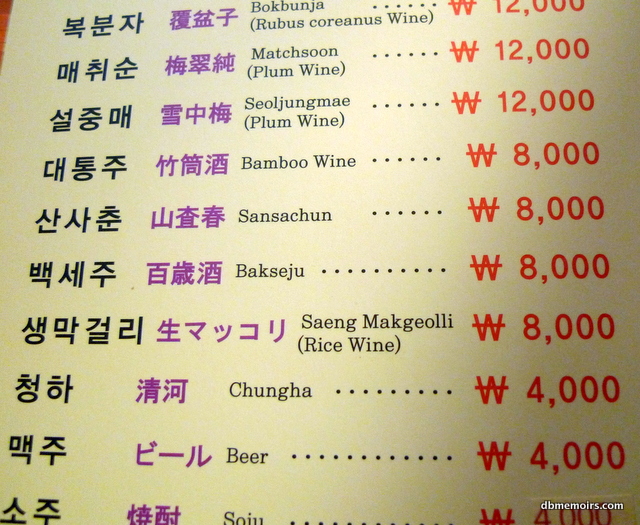 It was served in what looked like a flowerpot. Not too sweet, not as harsh as soju, a bit rustic but very fragrant and refreshing. A couple of bowls gave me a nice buzz. 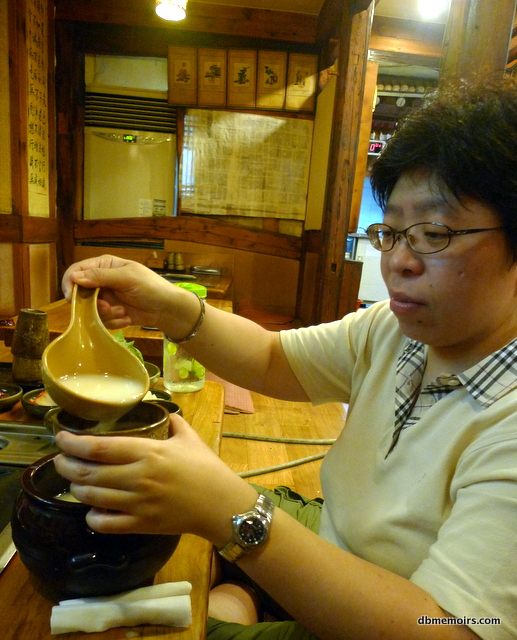 We couldn't get enough of the marinated galbi, so we ordered more. This was easily the best tasting beef barbeque I've ever had. A little bit sweet, a little bit salty, had a subtle spicy kick, very tender but not mushy, and not too fatty. I don't think I will ever appreciate Western-style beef barbeque again after this. 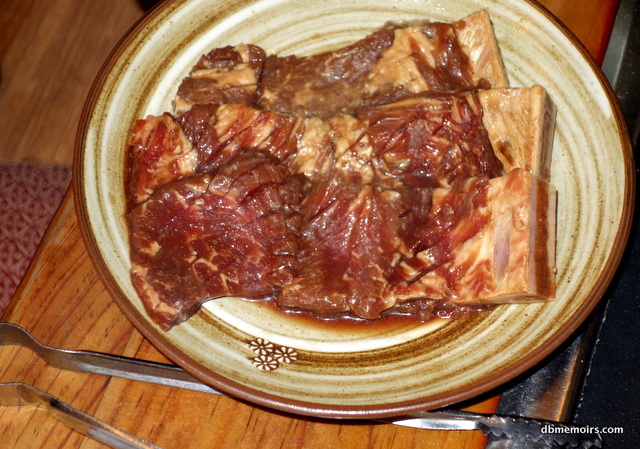 As our meal was winding down, I felt like I still wasn't full-- or maybe it was the alcohol talking. Anyway, the green tea neobiani looked interesting. It was OK, but nothing beat the galbi. 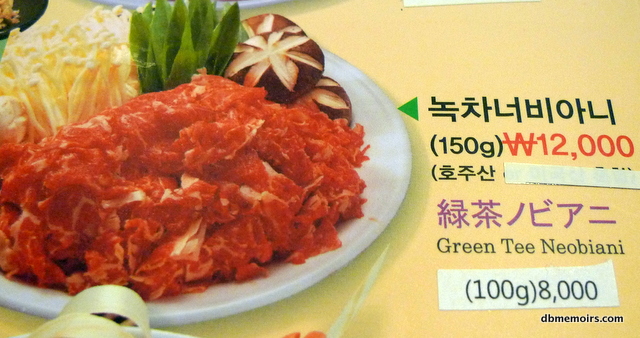 We were originally eight in our group, but we lost two ladies that evening. They decided to skip dinner in lieu of shopping. S'okay. They have multiple-entry visas and can go back anytime. Maybe they can bring me back a bottle of makgeolli? 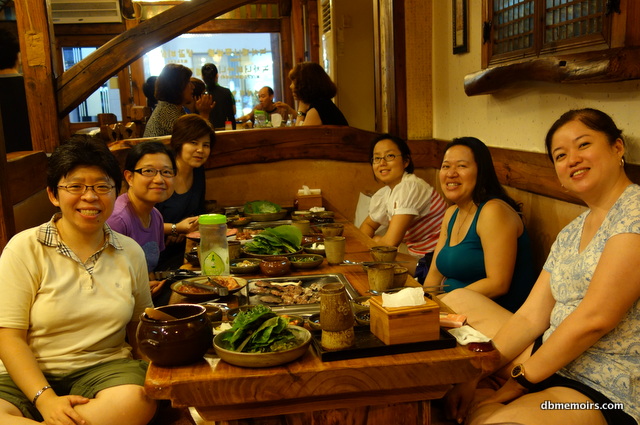