Iggy's, the best restaurant in Asia according to The Miele Guide. How does one dine there without any preconceptions? Answer: You can't.

My entire Iggy's experience was a roller coaster ride from start to finish, and even beyond. Yez, even now, I still have a hard time describing what I really feel about the whole thing. Did I love it? Did I hate it? Whenever I think about Iggy's, I have to pause and gather my thoughts.

First, let's tackle something simple, like reservations. I was mildly shocked that they answer their email, and so promptly too. In fact, they even made a teeny exception for me because I told them that that they couldn't call me a day in advance to confirm my booking for lunch on 9 December 2011 (their SOP) since I would be on a plane and my phone would be off. In essence, they replied: WTH, you're in.

So that was a bit of a surprise. Asia's best is not hoity-toity.


I had already read about their new dining room at The Hilton Hotel, of course, and I knew that it was often described as "plain". The decor was sparse but tasteful. However, I kept feeling that there was something missing. It was as if they were aiming for "cozy" like a living room, but ended up "austere" like a warehouse. There was lots of space in between tables, and although we couldn't hear other people's conversations, I felt that we were all very exposed-- like flies on a white tablecloth. It was unnerving.


The service, which one disappointed blogger described as "chaotic", was warm and attentive that day, but because the room was so small, it felt like Julius (our excellent, excellent Filipino server) was trying hard not to breathe down our necks. On the plus side, you never have to ask for anything because he's always there. But on the other hand, there were times when I wanted to tell him to go somewhere and just chill for two minutes. If I had a choice, though, I would rather have Julius right at my elbow than wait ages for service, so this is not a serious complaint. It was just... unnerving. Keep in mind that there were half a dozen Juliuses scurrying about in the dining area.


But in the end, it's about the food. I've learned that I don't always agree with The Miele Guide's choices, but Iggy's has been named numero uno three times already. As we started to eat, I was thinking, "Well, it might not be that good, but it can't be bad." Ironically, I had begun the meal with low expectations.

No a la carte that day, but the lunch set looked interesting and included some of Iggy's specialties. My mother and I ordered completely different dishes, but I chose not to taste any of hers because 1) The portion sizes were just enough for one person, and 2) Each dish had a myriad of components, mostly one piece of each, that I'm sure the chefs intended to be eaten by just one person. 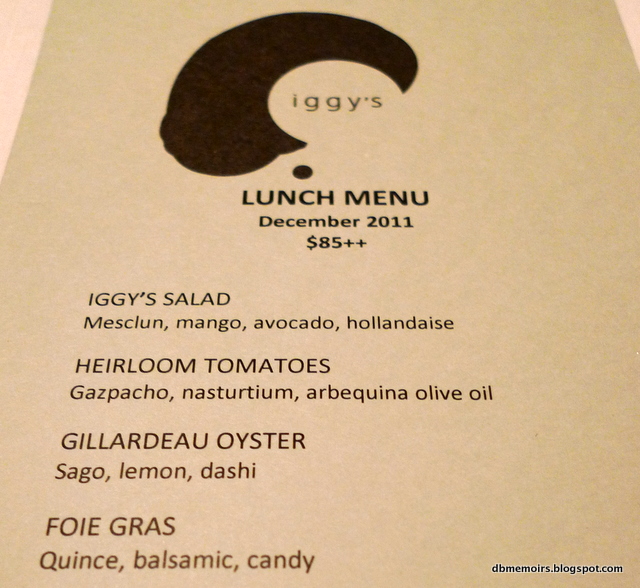 For our second course, I chose the shrimp cappellini because many positive things had been written about it on the interweb. Ma ordered the coddled egg because Julius recommended it. 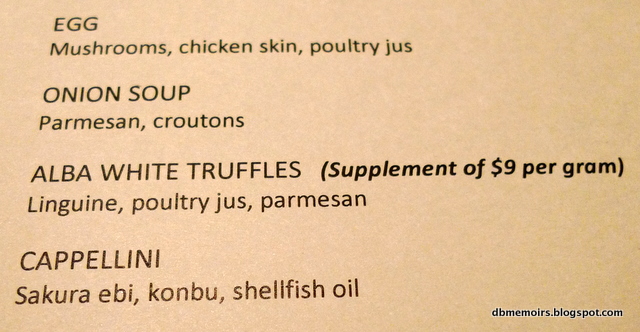 For the third course, I wanted something meaty and a little bloody, so I got the pigeon. After her first two heavy and rich dishes, Ma chose to go light with the fish. 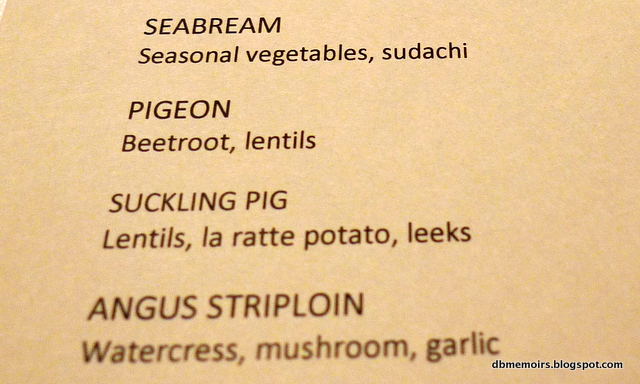 Finally, dessert. I can't remember why both of us ignored the dessert with chocolate which is usually the safest bet, but I was very happy with my mango. 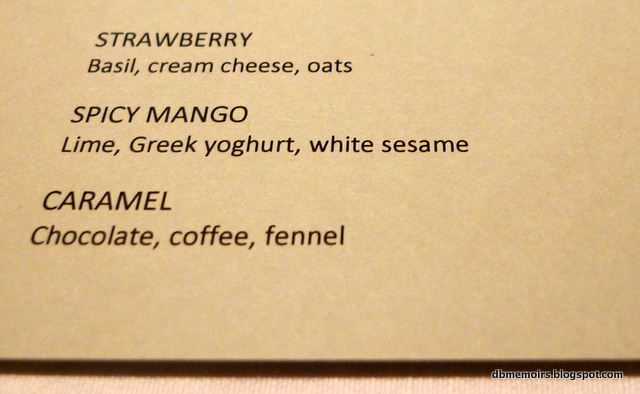 Verdict: So is Iggy's truly the best? If "best" means dreaming about it, craving for it, can't wait to go back to it, enthusiastically recommending it to everyone I meet, then sadly, it is not the best. Not my best, anyway. For me, that honor belongs to L'Atelier de Joel Robuchon in Hong Kong.

Which doesn't mean that I didn't enjoy Iggy's. Obviously, it's an exemplary restaurant, but at the risk of sounding hoity-toity myself, I feel that there's room for improvement. Even the menu could be a bit more focused. Is it because owner Ignatius Chan is a sommelier and not a chef?

(A word about the foie gras dish. It upset me because it felt like Iggy's was pandering to diners' expectations of what a fine dining restaurant should serve. It was completely unnecessary and distracting. It seemed half-hearted and didn't do justice to what is normally a premium and delicious ingredient.)

If you asked me where's good to eat in Singapore, I would recommend Iggy's. Not because it is Asia's best, but because it's pretty good and it's not too expensive. My favorite thing was the cappellini which every person who goes to Iggy's should order, no kidding. Every single ingredient on that dish was magnificent-- the beautifully sweet shrimp with the heads and tails still on, the flawlessly toothy pasta, the delicately fragrant shellfish oil, the specks of konbu that tasted of the sea-- and they married together wonderfully. It's something I would eat in a fine dining restaurant, or out of a take-out box in front of the TV.

Do I love Iggy's? No. Do I hate it? No. I'm strangely frustrated that I don't have a stronger reaction. I guess in the end, what I really expected was to be unambiguous about Asia's best restaurant, but it didn't happen.

Iggy's is at The Hilton Hotel on Orchard Road. You must make reservations because they can only accommodate about 40 guests at a time. Call +65.67322234 or send them an email.
Posted by Unknown at 2:54 PM
Email ThisBlogThis!Share to TwitterShare to FacebookShare to Pinterest
Labels: food, singapore, travel