Me and my homegirls decided to have dinner together when I was in Manila. In keeping with my "Try never-tried restaurants" theme, we hauled our butts to Serendra because there are so many restaurants there, we had never tried more than half of them. Perfect!

Now, the hard part. Choosing. Actually, I was looking for the washroom when we saw this: 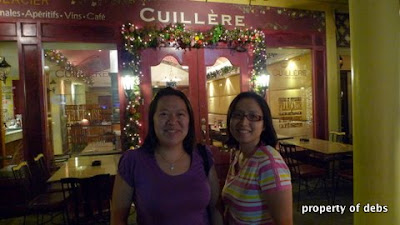 The location was a bit dark and tucked away, which I guess was the reason why there weren't many diners. But I had read good reviews about Cuillere, so we went in. 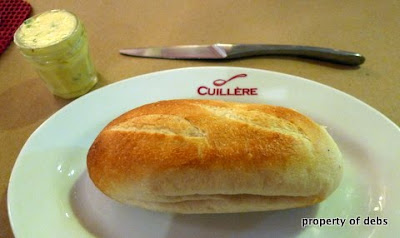 We started with some soup and salad. 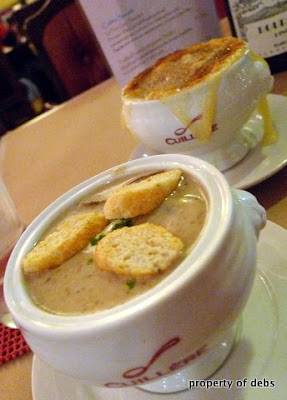 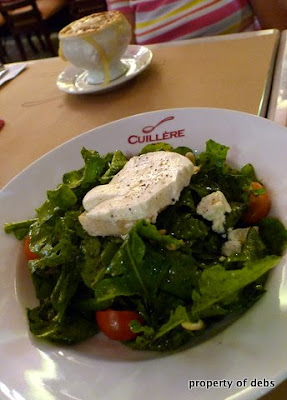 Arugula with warm goat cheese salad
Since we already stuffed our faces with the bread, soup and greens, we decided to just share two entrees. 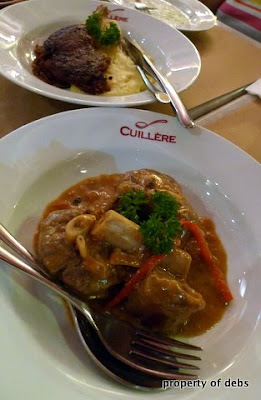 Duck confit with mashed potatoes and lamb shank stew with pasta
We ended our meal with a complimentary flourless chocolate cake with French vanilla ice cream. It was wiped out before I could take pictures.

Verdict: Cuillere is amazing! The food was hearty and homey, very French but not highfalutin. The mushroom soup was the best I'd ever had. I can't really say anything about the French onion because my lovely dinner companions didn't offer me a taste-- that good?! The salad was OK, but the main courses were stellar. The duck confit was crispy AND juicy, and not gamey at all. The mashed potato was super creamy and made me want to lick it off the plate. The lamb was literally falling apart-tender, but a bit salty. We should have ordered it with rice as an accompaniment, instead of the pasta. And the dessert? Hmmm... I don't really remember how it tasted, but it must have been good since we demolished it.

Psst! Hot Tuna! They have a foie gras sandwich on their menu. Mmm...
Posted by Unknown at 8:18 PM
Email ThisBlogThis!Share to TwitterShare to FacebookShare to Pinterest
Labels: food, manila