panic on the way to the airport

Here's what happened in the car. I planned this trip to Macau and Hong for the last week of September 2008/ first week of October 2008. I knew that my passport would expire in January 2009.

On the way to the airport, I said, "You know, I had a bad dream. I dreamt that we were at the check-in counter when I realised that I didn't bring my passport."

Pop exclaimed, "Well, did you bring it?"

Silence, then all hell breaks loose in the car!

Turns out that in this country, if your passport has less than six months' validity to go, you can't use it anymore. 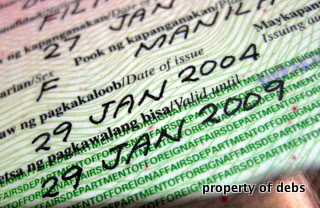 Now if they wanted me to renew my passport six months before expiration, then why didn't they just write down my expiration date as 29 July 2008?

Someone please explain this to me.
Posted by Unknown at 12:39 PM
Email ThisBlogThis!Share to TwitterShare to FacebookShare to Pinterest
Labels: hong kong, macau, travel