greenhills for the day

On my last afternoon in Manila, we went to Greenhills for some shopping and chow. To me, Unimart, Greenhills Shopping Center and Virra Mall-- no matter how much they renovate them-- will always be the last bastion of the 80s. Walking around these places brings me back to grade school and high school, when there were no giant SM malls yet, and our idea of a good time was Pizza Hut followed by a movie on the top floor of Virra Mall, buying a comic book at Filbar's and then a sundae from the first McDonald's in the Philippines.

Of course, it's not exactly the same as before. But the essence is still there. I guess Greenhills is now what kids would call "kinda retro".

Anyhoo, I ventured inside the Greenhills Theatre Mall to grab some Big Daddy's Chicken, which Jin Perez salivated over, here. 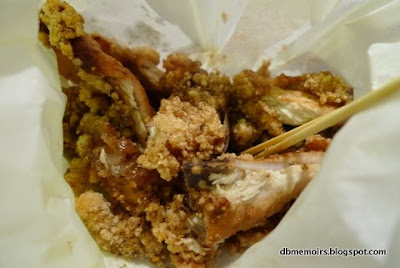 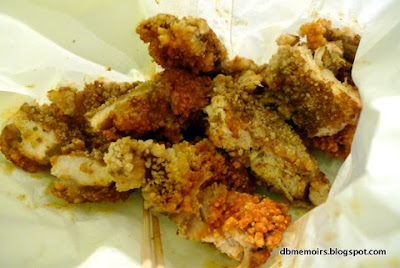 Chili chicken chop
Pretty good! We ate them as they were, without any sauce or sidings. I can imagine bringing them home to eat over rice or pasta or even a nice green salad, or serving them plain with some beer. The chili ones were particularly addicting.

A couple of stalls away was Bread Connection. Oh, that brought back memories. The Bread Connection sandwiches were Ma's default take-out meal for us kids when we had gone through all the take-out and delivery menus in the kitchen drawer and wanted something else. I'll be sure to get me some bacon and egg on round (yes, round) white bread next trip. 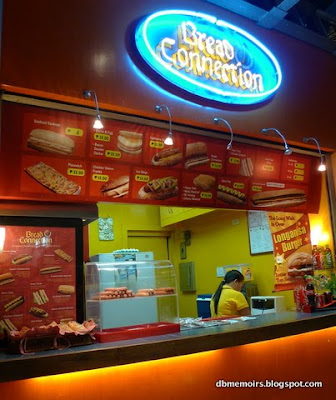 Dinner was at Gloria Maris across Unimart. Pop had a hankering for hotpot. Check out the condiments: 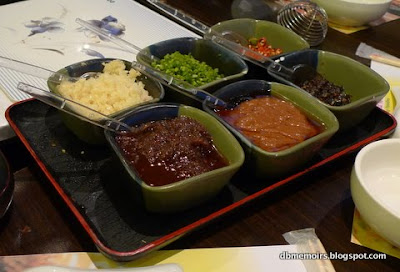 Clockwise: Fresh red chilis, chili garlic oil, peanut sauce, satay sauce, garlic and spring onions
Ma ordered the set for four (which looked to me like four pieces of everything), plus some extra fatty beef and fish balls. 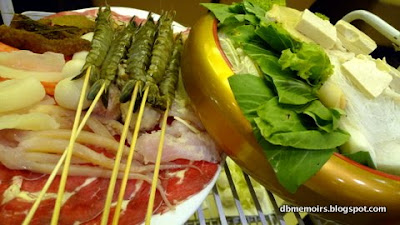 We had two kinds of soup, plain and spicy. We dumped everything in. 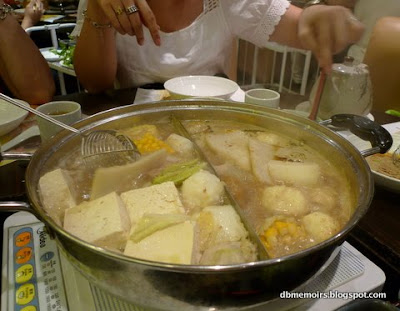 My gripe is that some of the ingredients in the set were not what we wanted to eat, e.g. the scary tentacles. The other table had lobster balls and veggies ONLY for their hotpot. I wanted to make friends and join them. The set is probably cheaper and makes decision-making easier, compared to ordering all the components individually, but wouldn't it be worth the added effort and moolah to have a hotpot where every scrap of meat and vegetable was consumed-- and with excitement and gusto?

(Note to self: Must try lobster balls next time.)

Still, waste not want not, so we ate it all. Except the tentacles. 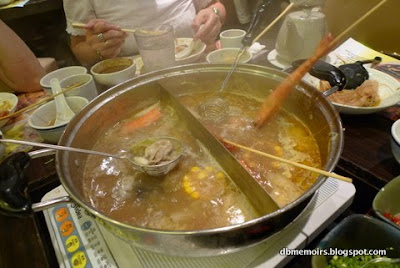 At the end of the meal, we were full to bursting, sweaty and smelly. All signs of a satisfactory hotpot experience.
Posted by Unknown at 9:45 AM
Email ThisBlogThis!Share to TwitterShare to FacebookShare to Pinterest
Labels: food, manila, shopping