nice place to visit, but...

After we'd secured our plane tickets, I started searching the internet for a hotel. Here's a list of the ones I researched and the reasons why we didn't stay there:

1. Hotel Ilocandia. It's undoubtedly the best hotel in Ilocos, but without our own vehicle, it's impossible to get to any of the sights without hiring a golden car. I say "golden" because it costs a fortune. Oh, and they don't respond to email inquiries. Thumbs down in my book. Still, we went to visit.

2. Java Hotel. They answered my first email. Never heard from them again after I sent follow-up questions. The hotel looks wonderful in pictures, and the reviews are great. But when we passed it on the way to Pagudpud, we saw that there a petrol station right in front of it. WTF?

3. Tiffany Hotel. Communicating with them was great. They required a one-night deposit, which I agreed to. When I asked them how I was going to pay, I never heard from them again. We visited the building when we got to Laoag. Excellent location and cheap, but we didn't get to see the rooms, so I can't say more about it.

4. Sitio Remedios in Currimao. I'd read about this place in Jessica Zafra's blog. I really, really wanted to stay there, even for just a night. However, check-in time was 2pm and check-out time was 10am. The cheapest room which I tried to book still cost the equivalent of four nights where we ended up staying. After thinking about it for a long time, I decided that it was just not worth it. Maybe some day when I find Yamashita's treasure and have money to burn.

So we ended up staying at Renzo Hotel in Laoag City, for four nights before we moved to Vigan. The staff are great. The location is great. There's a bakery, a pharmacy and a supermarket all within shouting distance. Wifi was free, but only worked for two days when we were there. Not their fault, though. Just our luck that the internet was down in the entire city. We could see the receptionist going pale everytime we asked if the wifi was working yet.

We HAD to visit Fort Ilocandia. It's perpetually on the must-see lists. Here's the first thing you see when you enter the premises. 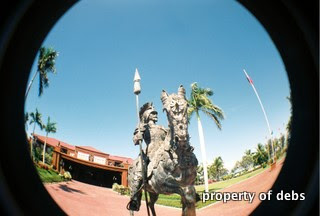 I assume that's Juan de Salcedo who colonised the Ilocos region in 1571 when he was just 22 years old, with a group of 45 soldiers. We didn't ask, but come on, why else would they put a statue of a Spanish guy on a horse in front of their hotel?

The hotel staff was very accommodating. You can walk in, look around, take pictures, stay for hours and they don't mind. We decided to have lunch there, so that we'd have an "official" reason to hang around. The food was good and reasonably priced. 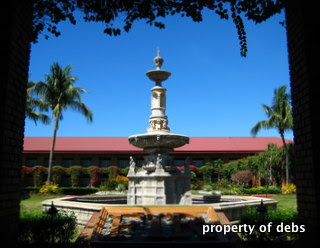 They had no guests when we were there. The sky was blindingly blue. Their flowers were in full bloom. Everything was clean and well-maintained. 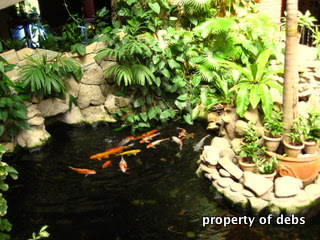 Afterwards, our friends and relatives who had stayed there before told us that it was haunted. 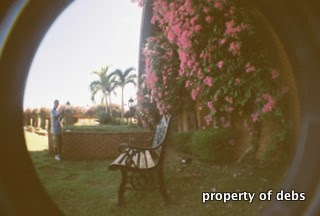 Posted by Unknown at 10:58 AM
Email ThisBlogThis!Share to TwitterShare to FacebookShare to Pinterest
Labels: hotels, ilocos, laoag, travel