it all started with the eraserheads

How did we end up going to Laoag?

Last year, we missed the Eraserheads reunion concert, which turned out to be not a disaster for us, seeing that it was cut short when lead singer Ely Buendia was rushed to hospital.

So when it was announced that they were having another reunion concert on 7 March 2009, we bought our tickets right away. 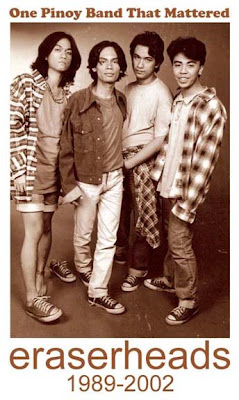 FYI, ticketnet and ticketworld both charge a minimal service fee. But since we bought the tickets directly from SM, no service fee. 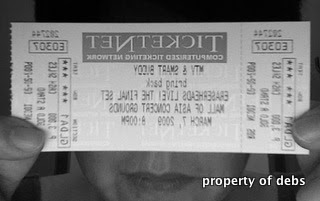 We knew that we were going to be in Manila then. Where else could we go? What else could we do? I started searching for cheap airfare to domestic destinations.

Philippine Airlines had the cheapest airfares going to practically anywhere-- Hong Kong, Singapore, Laoag... I started booking online, but every time I entered my credit card details, their website timed out. I emailed them to ask what happened. No reply. Against my principles (I'm a firm believer in emailing. Don't make me call you long-distance.), I finally called them long-distance. They said to try to book online again.

Here's the thing. You could only buy the cheap tickets online. So I was stuck. I became possessed. I tried entering my credit card details again and again. I called them long-distance again and again. Each phone call, they put me on hold for an average of 18 minutes. I spent the equivalent of half of the plane fare on long-distance calls.

Then a sign from the cosmos in the form of an email notification... from Cebu Pacific! They were having a seat sale. And of all the domestic destinations we'd never been to, Laoag was the cheapest.

It took me less than five minutes to buy our round trip Manila Laoag tickets. At about 1,100 pesos per head, it's less than 200 pesos more expensive than Philippine Airlines.

Don't remind me about the long-distance calls.
Posted by Unknown at 10:11 AM
Email ThisBlogThis!Share to TwitterShare to FacebookShare to Pinterest
Labels: airlines, concerts, ilocos, laoag, music, travel