We arrived in Macau on 28 September 2008, and visited the churches and temples the next day. On 30 September 2008, we went up the Macau Tower, and later watched Cirque du Soleil at the Venetian. (Ah, I didn't tell you about that.)
I visited Victoria Peak in Hong Kong for the first time on 1 October 2008. Pop and I were at Ocean Park the next day, then all three of us went to Lantau Island the day after. On 4 October 2008, Pop and I marveled at the Ten Thousand Buddhas. (Another story for another time.) We came home the next day.

Areas for improvement: 1. I was not happy with the camera I was using. 2. There were hordes of Made in Chinas-- what I call the mainland Chinese, to differentiate them from overseas-born Chinese-- because of the national holiday. 3. The weather was not so great as there was a typhoon. I saw this sign in one of the restaurants. 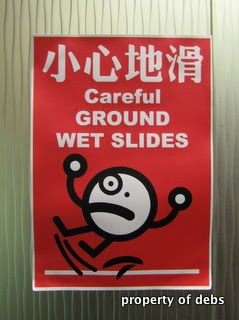 But, I had a great time. I know that Pop did, too. I hope Ma enjoyed SOME parts of it, at least. 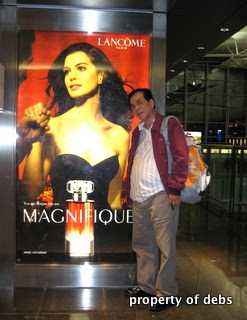