Today, it feels like the rainy season has begun. It's been raining on and off since last night, and the sky has no color at all. This kind of weather makes me crave ramen.

On 23 March 2013, I wanted ramen. I wanted authentic, unadulterated Japanese ramen, but I didn't want to drive all the way to Ukkokei Ramen Ron in Makati to get it. To my joyful surprise, I found an excellent ramen joint just ten minutes' drive from my parents' house. Welcome to the neighborhood, go-en The Ramen Shoppe Plus!

Although I wanted a traditional soupy ramen, when I saw the menu I couldn't resist the tsukemen. Bouncy noodles, perfectly cooked eggs, an umami-laced dipping broth, and pork with just the right balance of lean and fat. A worthy substitute for Bankara in Bangkok which was my first and best encounter with tsukemen last year.


The enthusiastic and knowledgeable server suggested the okonomiyaki as a side. This "pancake" had a lot of stuff going on, but I was impressed by the chef's restraint-- a very Japanese trait. It could very easily have gone over the top with too much mayo, too much sweet sauce, too much bonito, too much of everything, as bastardised Japanese street food tends to get outside of Japan. go-en's okonomiyaki reminded me of a Korean pajeon with its emphasis on fresh vegetables and seafood, but it was thicker, fluffier and more deliciously calorific.


Two weeks after my first visit, I brought my family to go-en so that I could finally have my noodle soup fix. That evening, I was bent on buttery corn so I got the Hokkaido-style ramen. The egg in my karamiso was a tad overcooked, but the robust, milky, nutty broth made up for it, and the noodles were just the right texture. This, this is what I am dreaming of right now.


The sister-in-law opted for the spicy tantanmen while the brother decided to take the simple route with the classic shoyu ramen. Both were just as good as my karamiso. There were four other variants on the menu, which means that I could probably eat at go-en for a week and order a different ramen every day to suit my mood.

And because the brother can't go to a restaurant and eat just one thing, he went ahead and ordered the entire menu some more dishes.

The fried chicken was crispy and moist, though a little too salty. (The owner, John Geron, assured me that they adjusted the seasoning after our visit.) The breaded prawns were OK, but the gyoza caused a minor controversy at our table. My brother declared them too dry, but John said that it was because they make it point to make the pork filling less fatty. I thought that they were the prettiest gyoza I'd ever seen, but sadly I wasn't able to taste them because I was too stuffed. I shall have to check them out myself next time.


My nephew/godson had the tonkatsu which I guess is the default kiddie meal at every Japanese restaurant. Someday I'm going to bring him to my favorite eateries and force-feed him introduce him to the wonders of pig snout, goose liver and beef marrow.

go-en's tonkatsu was fine, but not something I would order again. It's a ramen place, after all.


I liked the dessert: Mochi made in-house. About seven centimeters in diameter, it was the biggest mochi I've ever clapped eyes on, and probably the best I've ever tasted. I'm not a huge fan of mochi, but I'm thinking of buying a few of these and stashing them in my freezer.


I thoroughly enjoyed both meals I had at go-en. Kudos to the executive chef, Marivic... 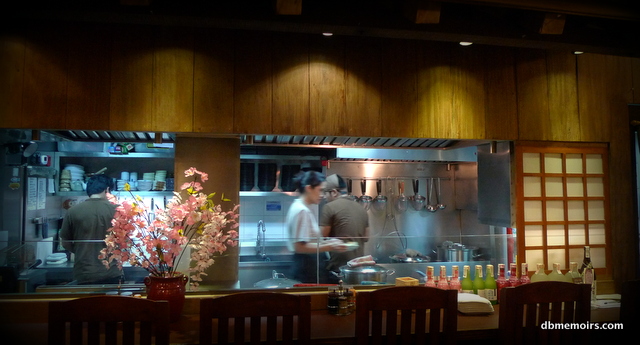 As well as to the Tokyo-based owners, Marilyn Pefianco and John Geron. You have succeeded in bringing a bit of Japan to Quezon City. 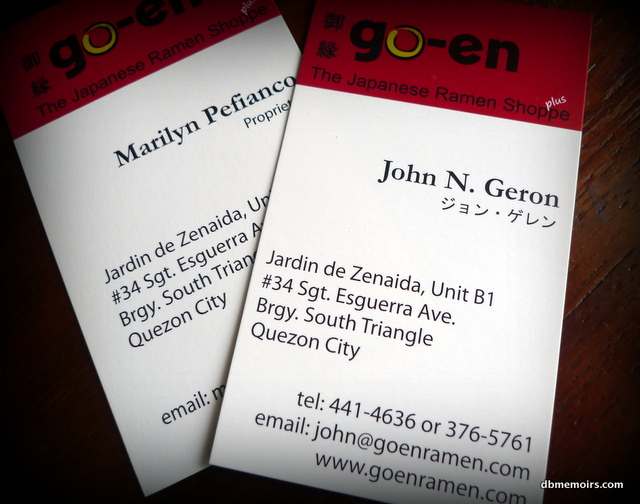 Before we left, John gave me a handy little paper cutter. Kawaii! 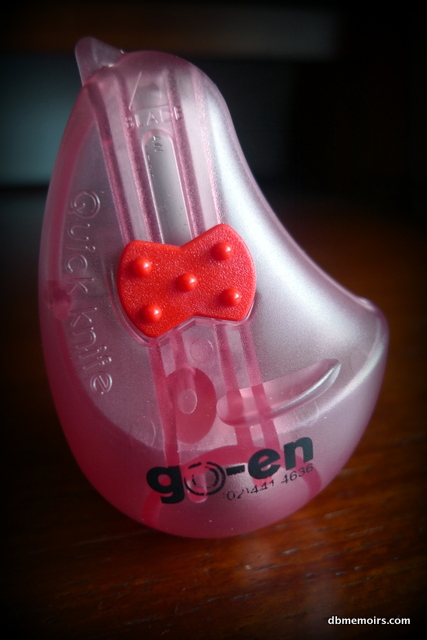 Verdict: Can't say yet if this is the best ramen shop in Manila, but definitely a strong contender. The service is outstanding. I love the cozy, relaxing dining area with a view of the open kitchen. The ambiance is more chill than any other ramen restaurant I've been to, and the food made me very happy. Highly recommended.

go-en The Japanese Ramen Shoppe Plus is located along Sergeant Esguerra Avenue in Quezon City. Phone +63.2. 4414636 or 3765761. Their website.
Posted by Unknown at 6:00 PM
Email ThisBlogThis!Share to TwitterShare to FacebookShare to Pinterest
Labels: food, manila