Earlier this month, my friends suggested I accompany them to Quiapo where they were going to buy camera accessories and bicycle parts. I hemmed and hawed a bit because Manila was sweltering and the traffic was sure to be horrendous. But when Mr. DJ said, "Afterwards, we can go to Binondo and eat!" I was sold.

I practically grew up in the area, but regretfully I hadn't spent much time back there in the last 20 years. When I returned on 4 April 2013, things hadn't really changed much, but I was not as familiar with everything as I thought I was. I felt like a tourist, I'm ashamed to say.

The first thing we did was look for breakfast. Behind Quiapo Church, I was introduced to the quintessential hole-in-the-wall: Globe Lumpia House on Raon Street. It was exactly the type of eatery my elders had always warned me about-- dingy and decrepit, and more than likely to give one food poisoning. I liked it. 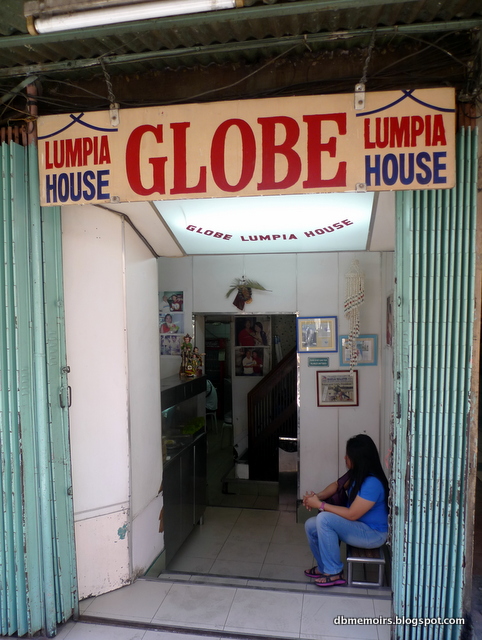 I have eaten lumpia all my life, but never for breakfast. Globe's hand-wrapped morsel served on a tin plate was just a little bit scary, but I gobbled it up and nothing bad happened to me. Of course this was not the best lumpia I've ever had, but it was tasty enough and hit the spot at 9AM. And it was definitely cheaper and more nutritious than a plastic McMuffin.


After breakfast, we took a quick look at the bicycle shops along Quezon Boulevard and ended up at Bahay Nakpil-Bautista, an architectural and historical treasure that I'd been wanting to visit for a long time. 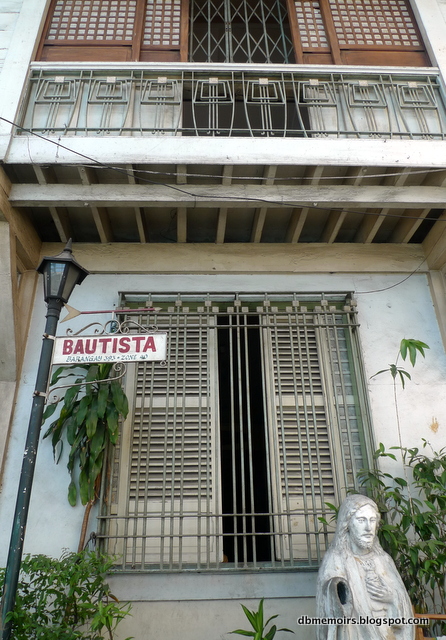 Gregoria del Pilar, Andres Bonifacio's widow, lived here. Bonifacio, Supremo of the Katipunan, the first president of our country and our national hero, is my favorite revolutionary-- the Philippines' Che Guevarra, but more noble and tragic, and way cooler. Even though he was killed before this house was built and had never set foot in it, its residents were members of the Katipunan whose descendants converted it into a museum. 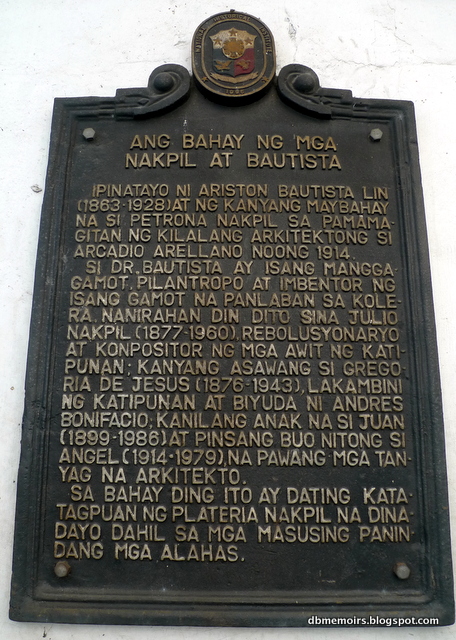 We spoke with the caretaker who told us that Bahay Nakpil-Bautista is a completely private enterprise. The family who owns it doesn't receive any funding or assistance from the government, and they're basically keeping alive such an important part of our history all on their own. It truly is a "Home of Heroes", both past and present. 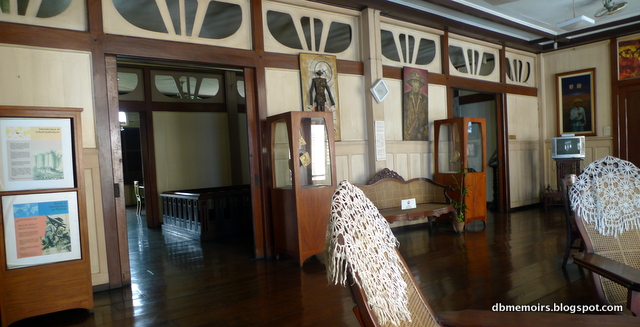 And then it was time for lunch. We walked to Santa Cruz Church and entered the oldest Chinatown in the world through Ongpin Street. At 11AM, we were perusing the menu inside the time capsule that is Mañosa.

Mañosa is the restaurant that ma-ki built. I was surprised that my non-Chinese friends had heard of it, and even liked it. Ma-ki (different from Japanese maki) is a dish that is hard to describe. Bite-sized pieces of pork, pounded soft to the point of being almost mushy, drowned in a brown cornstarch-thickened liquid. Not a soup, not a stew. On the menu, it's listed under "Snacks". Spring onions optional. Black vinegar absolutely necessary to cut the gelatinous slurry. Doesn't sound very appetizing, but believe me, ma-ki is part of every Chinoy's inventory of comfort foods.


Another thing that surprised me: There's other stuff to eat at Mañosa! My Chinese friends and family never, ever order anything except the ma-ki, but the fried rice was a marvelous revelation. A key ingredient of any good fried rice is wok hei (breath of the wok) and Mañosa's had it in spades. Each grain of rice was smoky, toasty and absolutely bursting with flavor. The pork roll (kikiam) and shrimp relleno weren't bad, either.

Our first lunch done, we gave up Mañosa's air conditioning, braved the noontime heat and slowly made our way to Ongpin Estero (Spanish for "estuary") for our second lunch an hour later. Out of the four or five tiny luncheonettes there-- all of which have AC now in addition to the al fresco tables, thank gad-- we chose the one at the end. Its name is LGA Fast Food, but honestly, it doesn't matter because I pick a different establishment every time I eat at Estero, I order the same things each time, and they're always very, very yummy. The frog legs were particularly meaty and juicy that day.

And then it was time for dessert. I racked my overheated brain to come with something cool and refreshing and Chinese. Memories of the desserts I had during my childhood raced through my mind. My grandparents used to end their meals with fresh fruit. During special occasions when we ate out, we had mango sago, almond jelly with lychees, and warm buchi. "Dirty" ice cream-- avocado, ube and cheese flavors were family favorites-- was a special treat.

But on that day which we later found out was the hottest day of the year, nothing would be as satisfying as a halo-halo. Chua Kee's version was pretty good, not spectacular, but it was just what we needed.


Chuan Kee is owned by Gerry Chua, the inventor of the ube hopia. We couldn't resist his ube siopao even though we had just finished two lunches. Sadly, it did not live up to our expectations. It was just an ordinary siopao with nary a trace of ube flavor.


At 230PM, we agreed that we were done for the day. Although we had barely scratched the surface of Binondo's culinary delights, we were too full to eat another bite, plus we felt like we were being baked inside a gigantic oven. We'll just have to go back sometime.

Of course, I had to take home some goodies.

The original Mañosa, not the terrible branches/franchises sprouting up everywhere, is located at 926 Ongpin Street.

Binondo, the world's oldest Chinatown, on Wikipedia.
Posted by Unknown at 10:08 PM
Email ThisBlogThis!Share to TwitterShare to FacebookShare to Pinterest
Labels: food, manila