I collected the tickets of all the concerts, plays and assorted live performances that I've seen in Manila this year. Well, all except one which I remember chucking into a filthy public bin and then yelling, "No-ooo!" 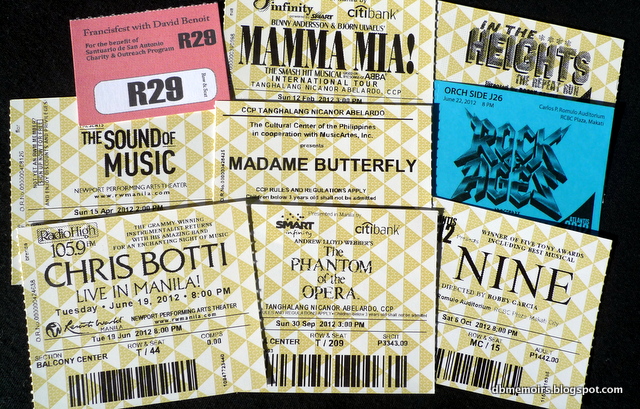 Mamma Mia! on 12 February 2012 at Tanghalang Nicanor Abelardo at the Cultural Center of the Philippines: The movie put me to sleep within ten minutes. The live musical made me want to kill myself within the first forty minutes. ABBA overdose to the max.

In The Heights on 23 March 2012 at Carlos P. Romulo Auditorium at RCBC Plaza: Lots of talent, lots of fun. Seemed like every actor who's currently involved in Philippine theater was in this one.

The Sound of Music on 15 April 2012 at Newport Performing Arts Theater at Resorts World: Everything was OK except Ariel Rivera. The guy can obviously sing, but his Austrian accent was hysterically atrocious. Remember the Swedish aliens in Dude, Where's My Car? Like that.

Chris Botti Live In Manila! on 19 June 2012 at Newport Performing Arts Theater at Resorts World: The best, the best, the best! Chris Botti, I love you! Read my review. He's coming back in December. Because I asked him to.

Rock Of Ages on 22 June 2012 at Carlos P. Romulo Auditorium at RCBC Plaza: A highly successful fundraiser for our upcoming high school reunion. I've made a vow to never, ever watch the movie. Tom Cruise, ew.

Madame Butterfly on 23 June 2012 at Tanghalang Nicanor Abelardo at the Cultural Center of the Philippines: A wonderful performance, but even after a cup of strong coffee, I could not stay awake for the whole thing.

The Phantom Of The Opera on 30 September 2012 at Tanghalang Nicanor Abelardo at the Cultural Center of the Philippines: Visually, excellent. Musically, a bit mediocre. After the first couple of songs, I just tuned out the sound and played the Sarah Brightman/Michael Crawford/Steve Barton CD in my head.

Francisfest with David Benoit on 3 October 2012 at Newport Performing Arts Theater: Overpriced, but I'm glad I went anyway. It might be my last chance. He's getting old.

Nine on 6 October 2012 at Carlos P. Romulo Auditorium: So much better than the movie. Jett Pangan is officially the best theater actor in the country right now. The set was the best I've seen this year. Yes, even better than Phantom's considering our minuscule budget and space constraints.

I lost threw away my ticket for Jekyll And Hyde on 21 April 2012 at Greenbelt Onstage. Anything with Jett Pangan is fantastic. He just keeps getting better and better. I'd like to say that I knew him when he was a young rocker (Enveloped Ideas, anyone?) but unfortunately, he doesn't know me. :-)

The one concert that I regret missing was Lady Gaga Live In Manila back in May... but not really. What I really wanted was Madonna, but it doesn't look like the Philippines will ever be in her life plan. Lady Gaga was just a substitute, although I heard that her concert truly rocked.

But there is one concert that I would never miss, even if I have to crawl on my hands and knees all the way to the concert venue. I'm so excited I can't stand it.

Ladies and gents, my god is coming to Manila! 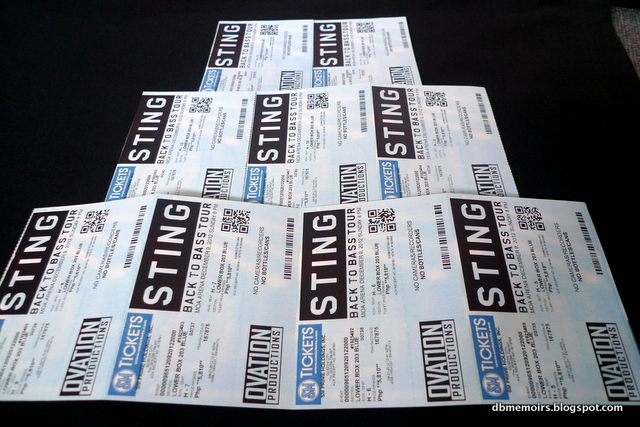 I wonder if Chris Botti will be a guest at Sting's concert. Not too farfetched. After all, they'll both be in Manila the same weekend. *crossing fingers*
Posted by Unknown at 12:31 PM
Email ThisBlogThis!Share to TwitterShare to FacebookShare to Pinterest
Labels: art, concerts, manila, music