You mentioned that for your trip to Asia next year, between Manila and Boracay, there was one week which you had left open for "anything goes". Have you decided where to go and what to do yet? Because I have a suggestion.

As you know, we went to Bacolod on 15 Oct 2010, just in time for the Masskara festivities. Like before, we had a great time with BenG, the Mayor and Attorney Gold. Being in Bacolod again and hanging out (read: "eating") with good friends made me realise how much I had missed everything! The food, the architecture, the scenery, the people... Did I mention the food?

There's something about Negros Occidental province that makes me wish that I had grown up there. I am undeniably, irrevocably, head-over-heels in love with the place.

So anyway, let's gow! You've only been there once, and there's so much more that you didn't get to experience during our Great Visayan Tour in 2007. For example, this time our intrepid guide BenG took us on a lo-ooong drive to San Carlos City because he'd heard about this extraordinary pizza. Let me tell you, this is the absolute BEST driving road in the Philippines. Every twist and turn made us go "Wow".

Next time, we'll take it slow and make lots of stopovers for more pictures.

After asking around a bit, we found the restaurant-- no mean feat considering that we didn't even know its name. But it's indelibly stamped in my brain now: La Grotta.

The pizza was truly outstanding. The crust was perfection. (The other dishes were pretty good, too, except for the white pasta. The bread that came with the salad was pronounced "winner" by BenG.)

Since there were only three of us, we couldn't order a lot, and that's why we need you! So that we can taste-test more dishes.

As we were leaving, we spotted some funny little sculptures made from iron nails salvaged from railroad tracks. Actually, the whole place was filled with interesting and eclectic knickknacks. 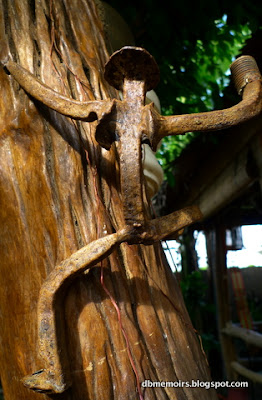 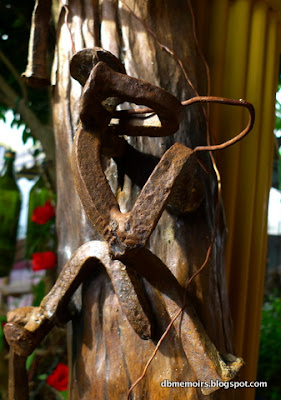 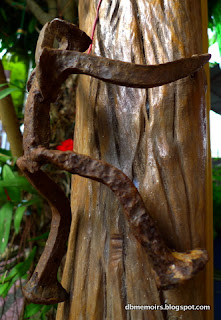 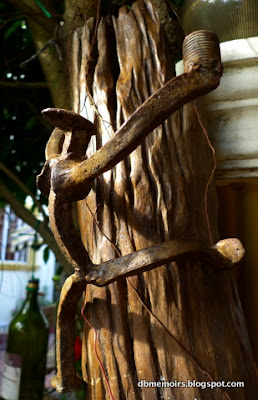 From San Carlos, we can jump on a boat and go diving in Cebu. Sound like a plan?

BenG: "What is it about this place? It's so relaxing. Is it the food, the music? Is it the MONKEY?"

Posted by Unknown at 4:07 PM
Email ThisBlogThis!Share to TwitterShare to FacebookShare to Pinterest
Labels: bacolod, travel