This would be the first time that I would eat durian voluntarily. When we were kids, Pop would bring crates of durian home all the way from Davao and force us to eat them because they were "good for you". They would stink up the car, as well as the entire house. To make them easier to eat, he'd ask the househelp to break them open, take the meat out and put them in plastic containers to be stored in the refrigerator. That meant that the refrigerator would stink, too. For weeks. Needless to say, I did not like durian. 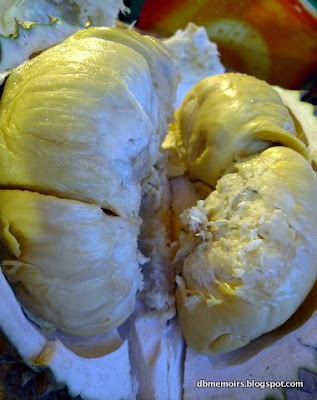 21 August 2010, Davao City. I had decided that it was time to try the durian in its natural environment, among die-hard fans who eagerly seek out its pungent scent and earnestly believe that it is the King of Fruits. Hot Tuna, our friend from London sent me a message: "You will love it. Don't be afraid."

We buy a good-sized one at the Trade Fair at SM City Davao and the vendor expertly cracks it open for us. The smell doesn't bother me, surprisingly. It's no worse than a yummy stinky French cheese. The texture of the meat's outer layer is smooth with a little give. It's a very delicate color which reminds of whipped butter. 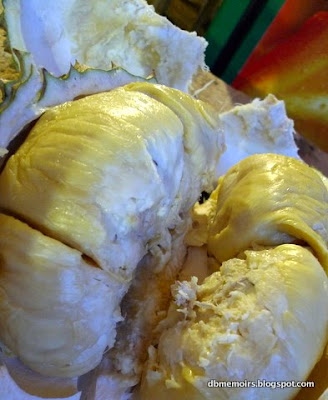 It's fantastically horrible. A flood of gag-inducing flavors assaults my taste buds. Every few seconds, just when I think that it can't taste any worse, a new wave of unpleasantness hits me like a blow from Manny Pacquiao. I swallow, and the aftershock in the back of my throat is what I think rotten maggoty meat would taste like.

Too late, our friend and local guide Marang (not the fruit) notices our facial expressions and says, "Actually, you can use your fingers, pinch off a little flesh, place it on your tongue and then hold it against the roof of your mouth until it melts away. That way, the flavor won't be so intense. You probably shouldn't have bitten into that huge piece in your hand, there." Er, thanks a lot. We were just following your lead, you know.

I do as instructed. It is definitely less traumatic. It feels like sweet custard dissolving on my tongue, with a slightly bitter finish. I put some more in my mouth, trying to hold on to that fleeting mixture of weird flavors and textures. I do it again and again. Before I know it, it's almost all gone. 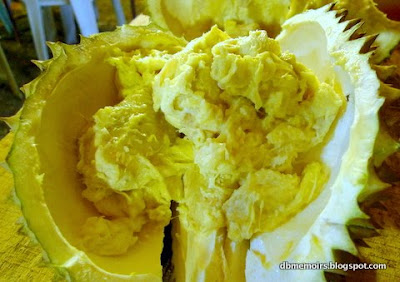 Fresh durian is unlike anything I have ever tasted before. It doesn't taste like fruit at all. Not vegetable. Not meat, either. It's completely alien and incomprehensible. It is insidiously addictive! Marang (again, not the fruit) said that unlike Davaoeños who had been eating this stuff from birth, it usually takes four or five tries for newbies to get used to it, but by then, they will be hooked and can't live without it.

As we drove around Davao for the week that we were there, we saw durian everywhere. Its unmistakable odor hung over the city like a pervasive fog. People sat on the sidewalks, digging in and licking their fingers, surrounded by mounds of empty shells. We saw families sitting around rickety tables al fresco, consuming one durian after another at an incredible pace, eating it with pork barbeque and knocking back bottles of Pepsi.

It will probably take a while for me to get to that stage. In the meantime, I will practice by eating durian pastries and candies. Like this delicious durian sans rival at Coffee Cat along Torres. 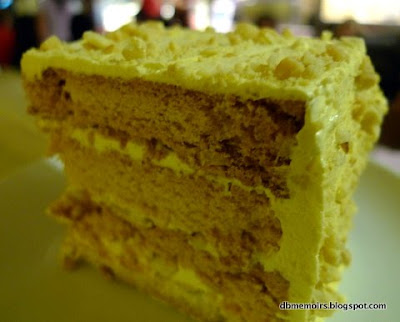 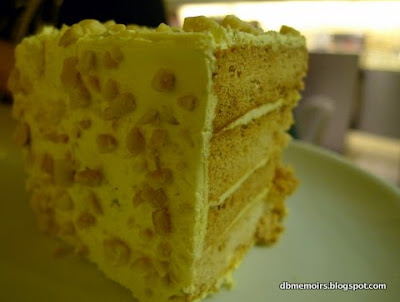 I would have no trouble eating this everyday. And yez, it's the durian that makes it so nice.
Posted by Unknown at 6:02 PM
Email ThisBlogThis!Share to TwitterShare to FacebookShare to Pinterest
Labels: davao, food, mindanao, travel