Dencia's in Davao City. It was a block away from our hotel. We ate there three times.


Verdict: When I was just a small D.B. in my grandparents' care, there was a restaurant across the street called Peace. It was my grandfather's hang-out, where he would sit and smoke one cigarette after another, drink his coffee with evaporated milk, read the Chinese newspaper and occasionally grunt at his table-mates who were doing the same things. The waiters looked like they'd been working there forever, and the proprietor was perched on a bar stool behind the cashier's counter, keeping an eye on everyone-- customers and staff alike. Dencia's reminds me of all that.

The food is very retro and comforting. I highly recommend the lumpiang shanghai-- the best in the world, according to Davao native Steve Shadow. The skin is not too thick and the stuffing is moist and flavorful, but it's the dipping sauce that makes it truly sensational.

The chop suey rice is a dish that really brought me back to the 1970s. It's really just a bunch of fresh and crunchy vegetables cooked in a cornstarch slurry and poured over some rice. It's so, so, so good. Even Bunny Rabbit liked it, and he didn't grow up with a Chinatown grandpa.

Dencia's seems to be the default restaurant in Davao for breakfast, lunch, merienda or dinner. The menu is astonishingly extensive, and yet all the dishes are familiar, soothing, and always, always the same. It's like a time capsule of my childhood. 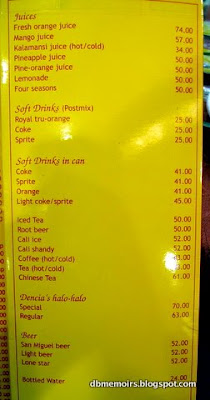 Click to enlarge.
Posted by Unknown at 9:22 AM
Email ThisBlogThis!Share to TwitterShare to FacebookShare to Pinterest
Labels: davao, food, mindanao, travel