Monday, 13 August 2012. A day which will live in infamy (with apologies to FDR). It was the day that Ma and I had lunch at Robuchon Au Dôme at the Grand Lisboa in Macau.

How did we get to Macau, what were we doing there when we were supposed to be in Hong Kong-- all shall be explained in the next blog post. For now, let us concentrate on the food.

I've never been a proponent of false humility, so I'll just go ahead and say it because it's the truth: My photos of this lunch are magnificent. But did the food taste good? Let's dive in...

I was always under the impression that an amuse bouche should be something small, easily consumed in one or two bites, preferably eaten without utensils-- like an hors d'œuvre. But twice now I've had a kind of chilled SOUP as an amuse bouche at Jöel Robuchon's restaurants. This cherry gazpacho was absolutely fantastic-- bursting with garlic and tomato flavors tempered by a dollop of cheese. The cherry scent made me giddy. Now THAT was an amuse bouche!


What's an indulgent, expensive meal without caviar? Might as well go all the way with three treatments of caviar in one course. The pea veloute with egg white and basil oil was magical, the single spear of asparagus was flawless, but regrettably the king crab in the caviar tin was too salty. Still, I enjoyed Le Caviar as a whole because it made me feel like a richie-rich. Notice the covetable caviar spoon and the gold leaf on the asparagus. 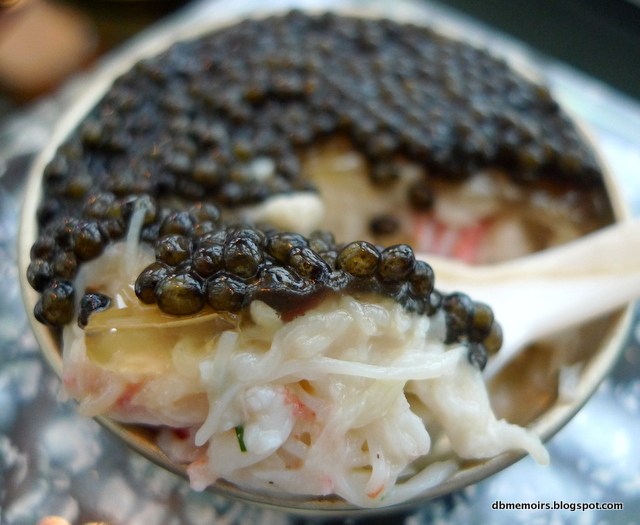 More gold leaf! A pretty salad always excites me, and I dug in before I remembered to take a picture. The deceptively simple L'Haricot Vert is what Robuchon does best: taking fresh and flavorful ingredients, and without changing them too much, combining them in ways that elevate the senses. I could eat it everyday for the rest of my life. I especially loved the crumble of hard-boiled egg and the dots of black truffle sauce.


The lettuce soup was just OK. The sweet onion flan and diced pancetta at the bottom were very nice, but I could have skipped this.


I loved/hated the next course. The sea urchin was the best I've ever had and the fennel mousse made perfect sense. The ravioli (a WHOLE langoustine!) was amazing, the foie gras sauce made me want to take a bath in it. But the king crab? Salty salty salty. 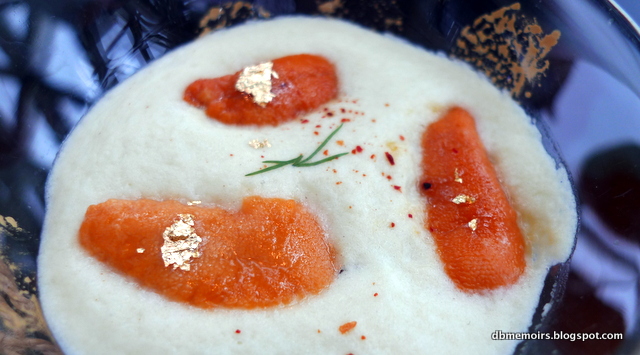 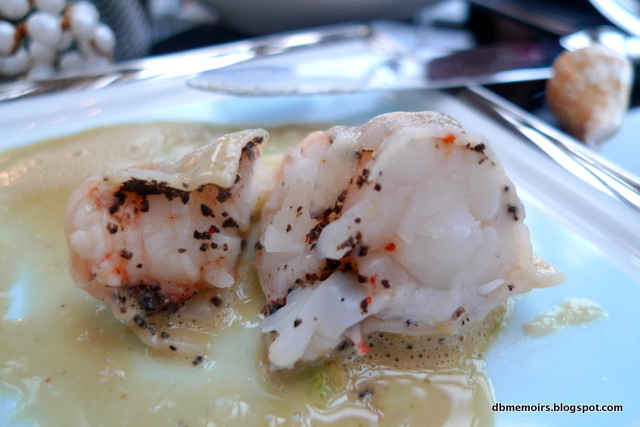 Ma ate the pigeon egg in one gulp but I cut mine with my knife, letting the yolk ooze over the golden chanterelles. Mix everything together, don't forget the purées on the side of the plate, et vòila! This was a dish we both enjoyed.


I would have liked the fish pan-seared with a crispy skin, like Guy Savoy's. Poached is OK but not spectacular. However, the tomato soup tasted like sunlight-- brilliant and lovely. But was the fish bone stuck in the middle of the fish really necessary?

(Actually, my one peeve about this meal is the inedible stuff on the plates. I'm all for presentation, but if you can't eat it, why bother?)


The beef was the highlight of the meal for my mother. Actually, I was not pleasantly surprised by the slightly stringy texture, but the deep earthy beefy flavor of the meat more than made up for it. Excellent with the Béarnaise sauce. And the potato chips were totally addicting.


The risotto didn't do anything for me. At that point I just wanted dessert, and I don't like nuts on my risotto, even a faux risotto.


The first dessert was just OK. The chocolate shell just barely satisfied my craving for something smooth and sweet. Everything else in the glass wasn't terribly impressive. I would have preferred a richer, darker, more chocolatey moist cake or soufflé.


The second dessert was much better. I enjoyed every component on the plate, but the star was the refreshing loganberry sherbet. What's a loganberry, anyway?


Verdict: So why did I say infamy? Besides the number of calories we consumed, this was the most expensive meal I've had in my life. Over HK$5200 (US$670) for two degustation sets, a glass of Merlot, a can of Coke and a bottle of water. I sure don't want to be around when my father gets his credit card bill.

When we arrived at Robuchon Au Dôme at 115pm, my mother spent a good 15 minutes going through the menu. In the end, she chose to go all the way (Ma is a firm believer of the "we're here already, so might as well" school of thought). In truth, I was mentally unprepared for the sheer volume of food. I mean, I would have been happy with just three courses. But after three hours of non-stop gastronomy (with a bathroom break) I prevailed, hyperacidity be damned.

Of course I loved this meal, but somehow I'm also sad about it. I have lost a part of myself. Never again will I look forward to a Jöel Robuchon, or any other meal for that matter, with the same innocent anticipation and excitement. I have achieved a sort of ultimate (best restaurant in Asia, three Michelin stars), and my world is not the same.

But Robuchon Au Dôme was not my first kiss, so to speak. I've had equally wonderful food before, from the same chef, at L'Atelier de Robuchon-- a restaurant near and dear to my heart. I can't say which meal I favor, or which restaurant, or even whether I would go back to either. All I know for sure is that wherever there's the slightest whiff of Robuchon, I'm going there. He is my god, and I look forward to worshipping at all of his temples.