90 kilometers in one day

The best way to explore Camiguin Island is by motorcycle. Not a lot of people know this.

This is what commonly happens: As soon as you step off the ferry at Benoni Pier you are accosted, albeit politely, by a dozen tour guide/drivers offering their services for the day. You pick a guy and negotiate a rate, usually 1500 to 2500 pesos, depending on how many are in your group and how many hours you expect to rent his vehicle. You get into a multicab which can fit six to eight people. Maybe more, if you're skinny and/or enjoy close physical contact. You are then whisked off in an Amazing Race-like fashion to visit all the must-sees on the island. You make it back to the pier in time for the last ferry so that you can go back to Cagayan de Oro City and upload your pictures on Facebook.

But that's not how we roll. We prefer to take our time, to stop and smell the proverbial roses, to get to know the local people in their natural habitat and to eat the native specialties. A motorbike is perfect for this type of undertaking.

Our first stop was the Philvolcs (Philippine Institute of Volcanology and Seismology) Observatory on Mt. Hibok-hibok. It was only a few minutes' drive from our cottage near the beach in Mambajao but it felt like a different world. 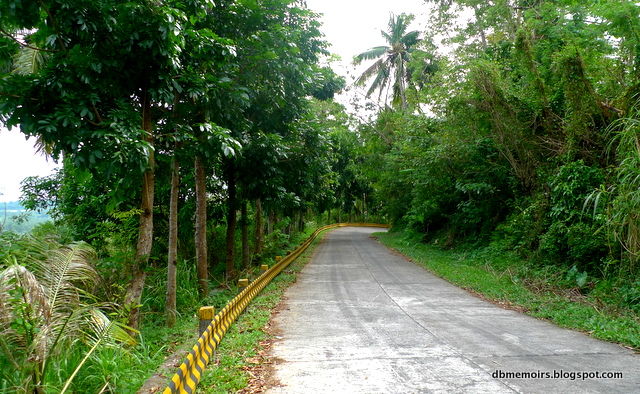 One of the scientists at the facility took a break from "observing" and we had a nice long chat about the importance of their work, what it's like to live in Camiguin, the problems of Mindanao and how to attract more tourists and foreign investors. Friendly guy. 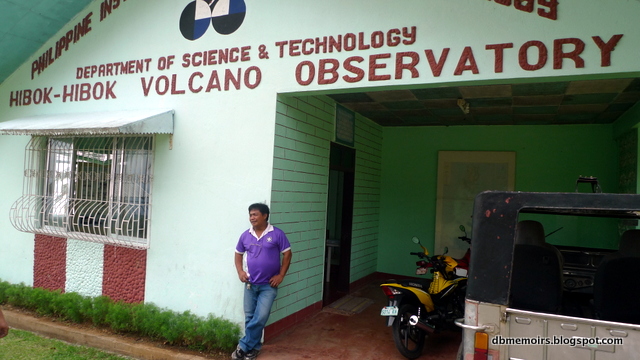 He told us about a shortcut to Katibawasan Falls. It was just a dirt trail but we had no problems finding our way. The entrance fee is only 15 pesos and there are clean bathrooms for people who want to swim. The waterfall itself is quite ordinary but the whole area is very lush and serene.

Lean season + early in the morning = We were the only ones there! 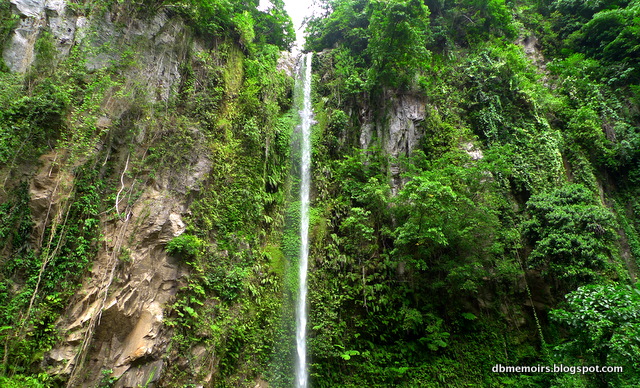 We left Katibawasan just as other people started showing up. We drove out to the main road and headed south. My goal was to try to go all the way around Camiguin before dark, following the coastal highway, but I already knew based on our track record that it was improbable.

I mean, how could we not stop and gawk at these views? 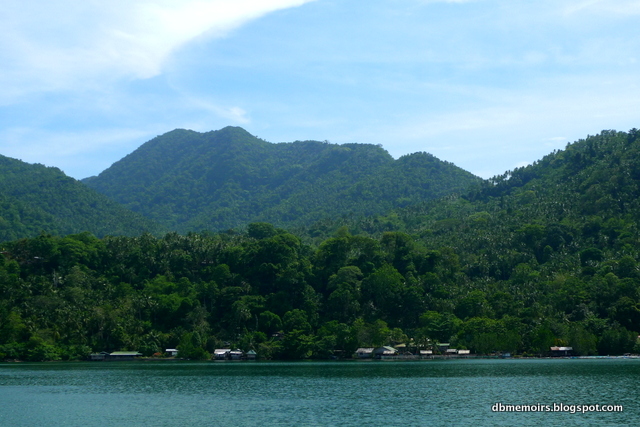 We decided to have lunch at J & A Fishpen Resort and Restaurant behind the man-made Tanguines Lagoon in Mahinog town. I had read some good things about it, like how you can catch your own fish and have it cooked on-site. But unfortunately when we were there, fishing was not allowed for some unfathomable reason. Instead, we were led to a smallish pen and asked to choose from what was already in there. Slim pickings, I tell you.

The adobo mussels were a complete waste of energy and money. Sadly, the mussels were emaciated, stringy and tough. The sauce was way too salty.

Our server offered us a grilled pantaan which we had never heard of before. He said that it actually came from the sea (saltwater) and "strayed" into the lagoon (freshwater). I was shocked and a bit dismayed to see that it was a batfish-- a fish that I have spent my entire diving career trying to convince fishermen not to catch-- but hunger won out. Besides, I was curious to find out how it tasted. 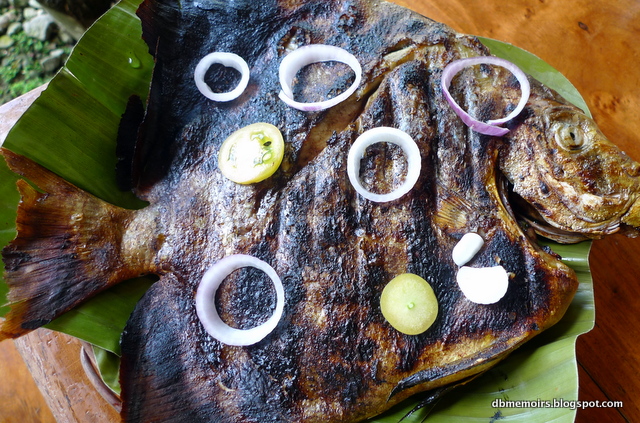 The batfish has a mild-tasting flesh that's both milky and flaky. The bones are big and easy to spot. Its head is tiny which means that most of the animal is meat. I likey. I don't feel too guilty about eating it since it's not endangered, after all, but I would not seek it out. But it's good to know that if I were marooned on an island, batfish could be on the menu.

There was a zipline operator booth set up near the entrance of J & A. We figured at only 200 pesos per head (50% off because it was their fiesta weekend), why not? The outfit was cool in a Bananas in Pajamas kinda way, and the view was amazing. 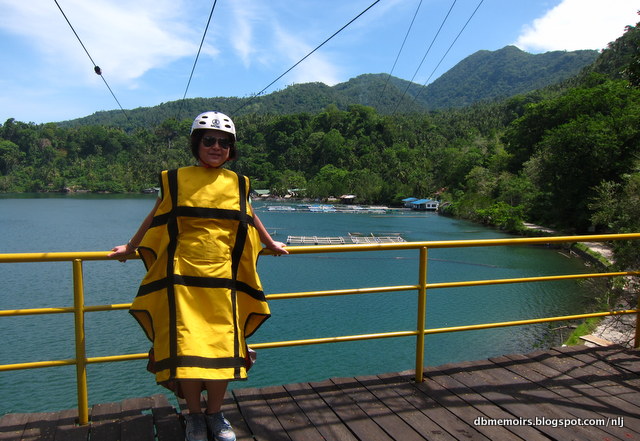 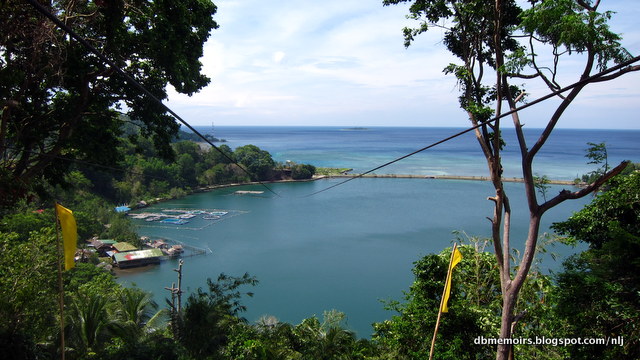 As I approached the end of the line, cute little red parachutes were released to slow me down so that I wouldn't crash into the barrier. (Other ziplines I've tried just let you brake with your face.) The fact that I required three parachutes had nothing to do with my weight, OK? It was a blustery day. 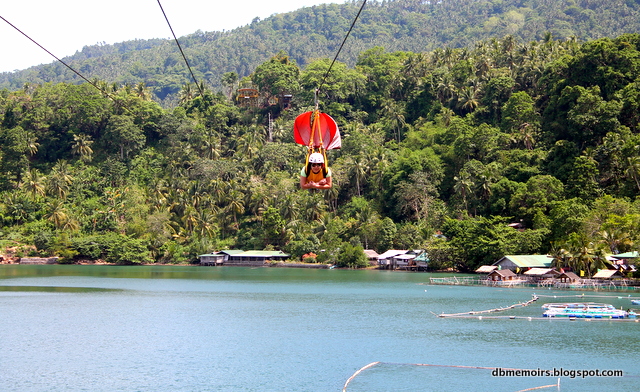 Our next destination was the 130 year old Santo Rosario Church in the municipality of Sagay in southwest Camiguin. It has some interesting details such as the driftwood chandeliers and the bamboo altar, but overall it needs a lot of restoration work. 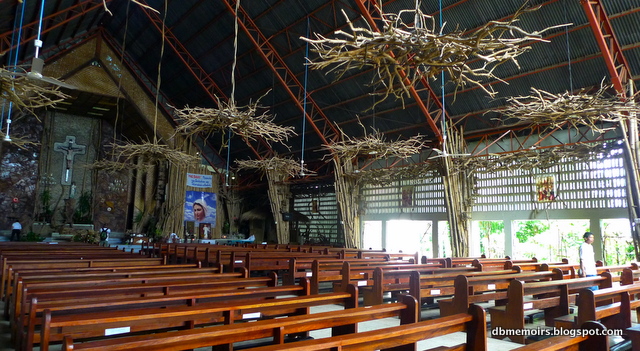 I much preferred the Green Church behind it. It's basically a few stone benches under a beautiful ancient tree. I can't think of a better place to worship, actually. 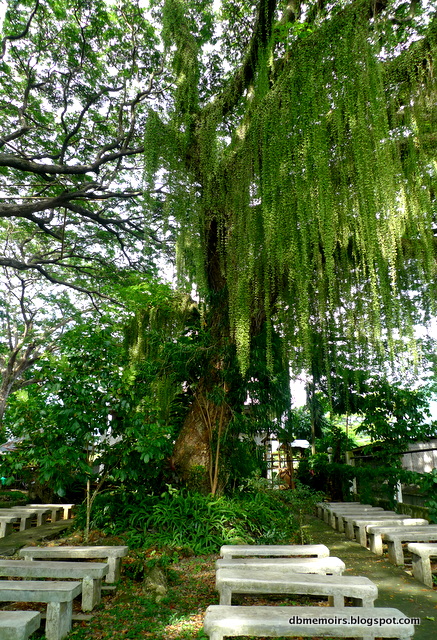 It started to rain mid-afternoon. We waited for it to stop or even just taper off a bit so that we could do some more sightseeing, but our luck had run out. We drove the last 20 or so kilometers back to Pabua's Cottages through a relentless deluge.

When we got home, we were completely soaked and dripping wet down to our socks. But we were safe and sound and not too uncomfortable-- thank gad for warm monsoons. Our trusty motorbike which cost a mere 500 pesos to rent for 24 hours was perfectly reliable. Oh, and Camiguin's roads are well-maintained and a joy to drive on. 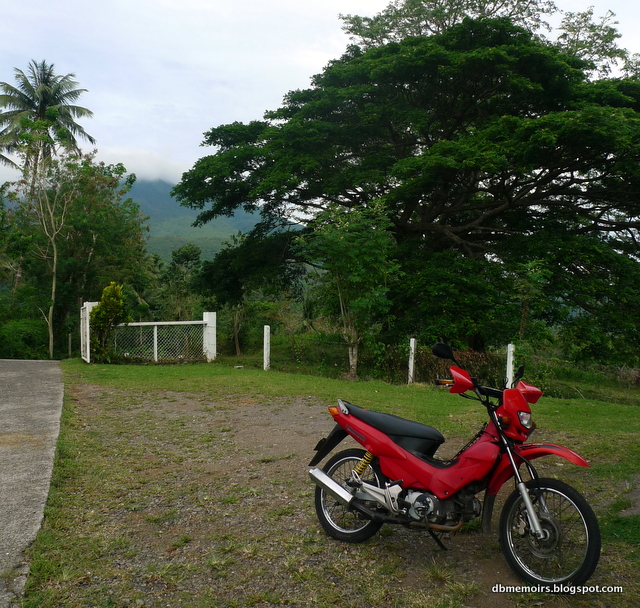 Camiguin's coastal highway is only 64 kilometers, but with the side trips into the mountains and the doubling back whenever we saw something worth photographing, we drove a total of 90 kilometers that day, 27 June 2012. It was an excellent adventure. I would do it again but next time, I'm going to wear a bathing suit and flip flops in case it rains.
Posted by Unknown at 11:05 PM
Email ThisBlogThis!Share to TwitterShare to FacebookShare to Pinterest
Labels: camiguin, food, mindanao, travel