other stuff we ate: luang prabang

There is one dish from Laos that I developed a craving for: the Luang Prabang Salad. The first time I tried it was at a nameless restaurant on Khounsua Road. It was more expensive than the one I had at Arthouse Café and it lacked an essential ingredient, phak nam (locally-grown watercress). But the dressing was ambrosial, and the vegetables were so fresh that I could hear every crunch reverberating in my head as I ate. 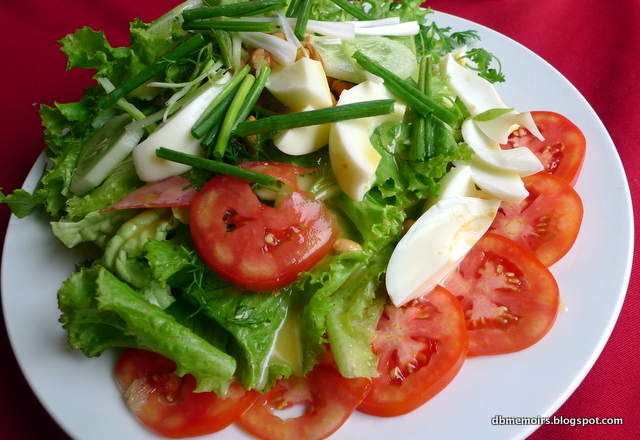 I've noticed that I'm liking soups more and more as I get older. So glad that I live in Asia, yay! This bowl of chicken noodle soup I found at a little stall beside Croissant d'Or was light and clean-tasting, and had a wonderful surprise at the bottom of the bowl: a bunch of watercress. 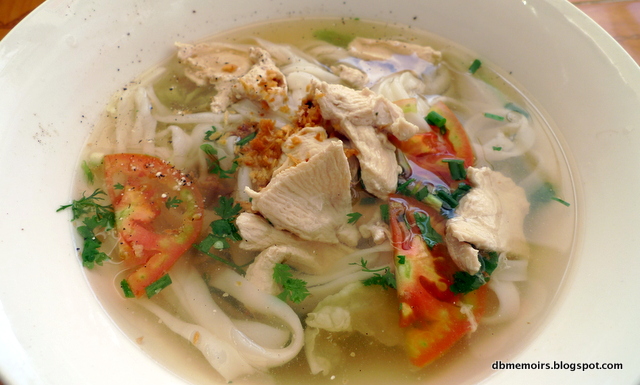 Near Food Street, there's a place which serves beef noodle soup like a Vietnamese pho bo, with very thinly sliced meat, a couple of beef balls and lots of veggies. If you want even more greens, they serve some long beans, watercress and basil on the side. 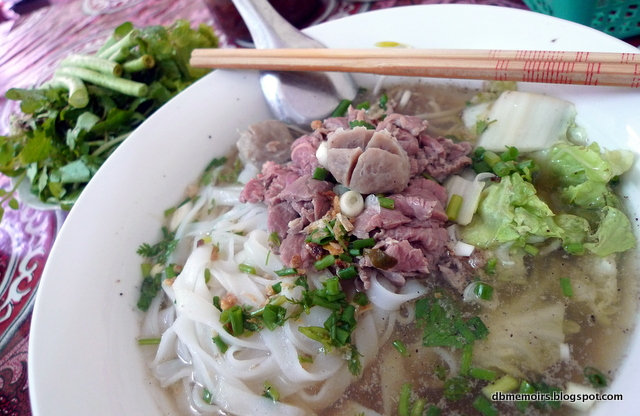 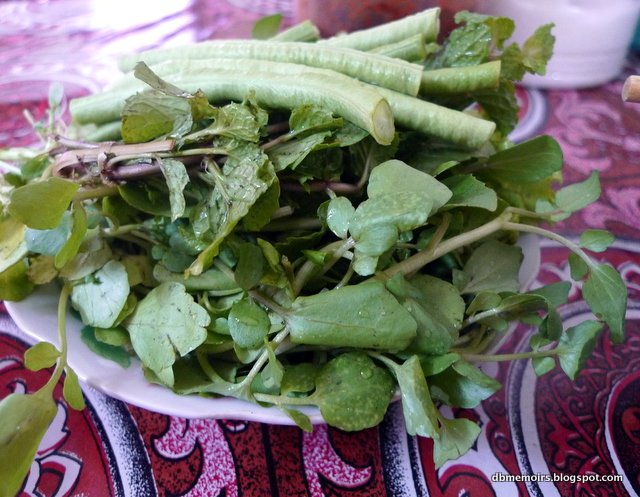 We were pleasantly surprised to discover that Beerlao is a really, really good beer. Much, much better than anything we tried in Thailand (but of course, nothing beats San Miguel Beer). I prefer the Beerlao Dark Lager which we had with a plate of tasty seafood fried rice. 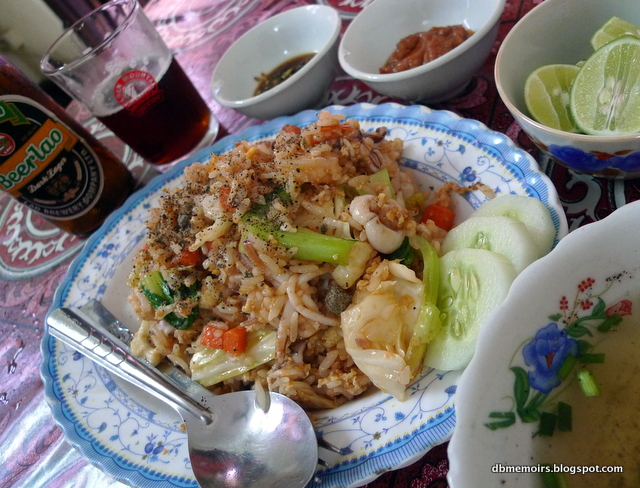 On our last night, we had a couple of 640mL bottles of Beerlao Original Lager for only 10,000 kip each. Excellent with some local mildly-spiced pork sausage which was juicier, more flavorful and cheaper than the buffalo sausage at Les 3 Nagas. 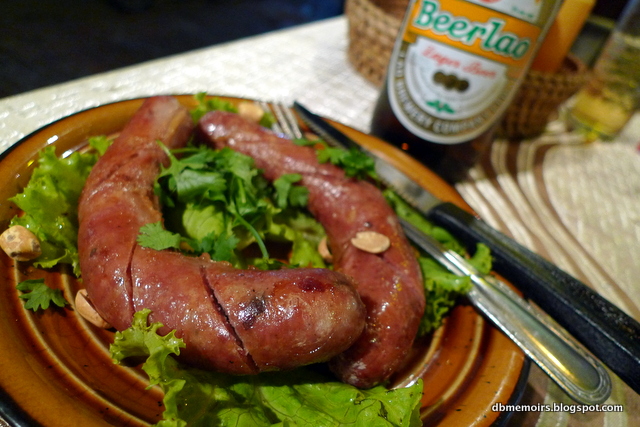 We had not had any Western food for more than two weeks and I couldn't resist the pizza at Coconut Restaurant. I'm not sure if I was experiencing junk food withdrawal at this point, but it was heavenly! The  crust was exquisite-- even better than Mario Batali's. Must be the French bread-making influence. 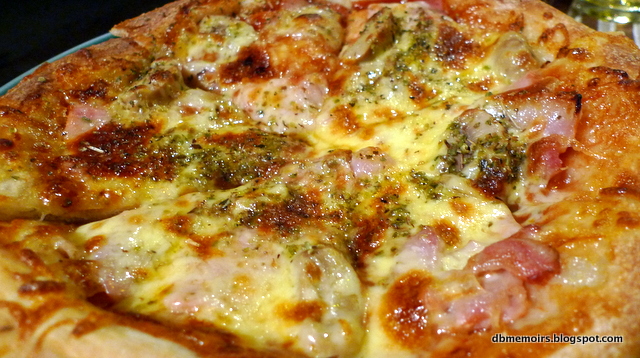 There was time for one last lunch before our flight back to Bangkok and we had some kip to burn, so we went to Khmu Restaurant. We noticed that it was always full during dinnertime, so we decided to see what the fuss was about. 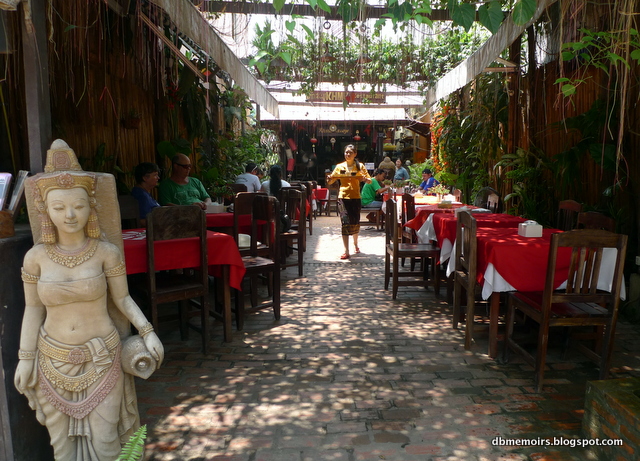 OK, no beating around the bush. The strange Khmu fried rice with curry and lemongrass was not good, and pricey at 25,000 kip. 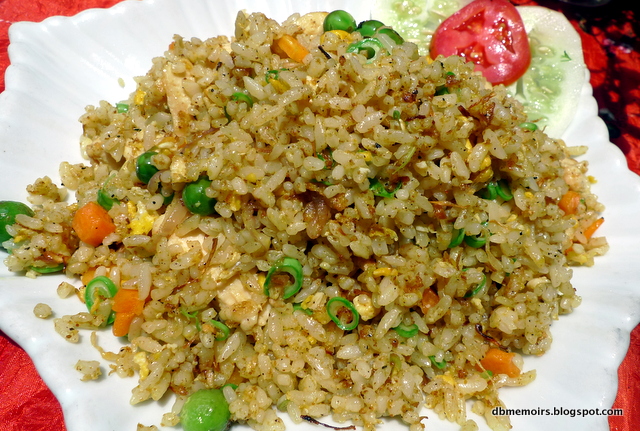 The bland and overcooked steamed fish with lemon sauce was not good, and pricey at 39,000 kip. 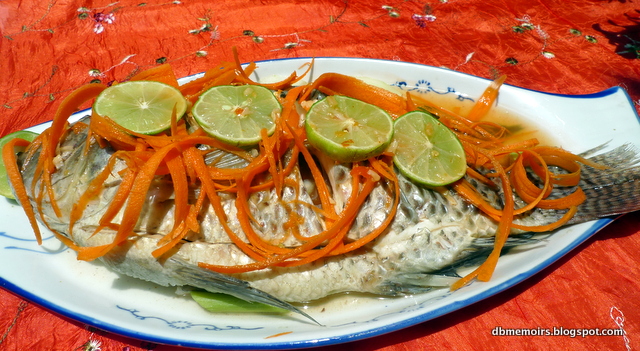 The tough and stringy stir fried beef was not good, and pricey at 35,000 kip. 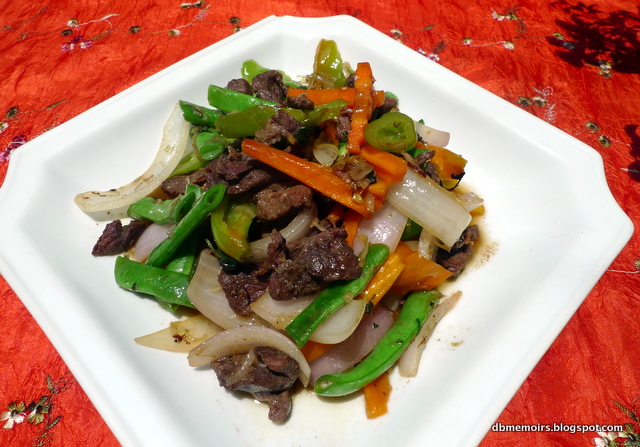 But then, you can have a fresh fruit shake from any sidewalk stall for only 5,000 kip. My favorite was the dragon fruit. 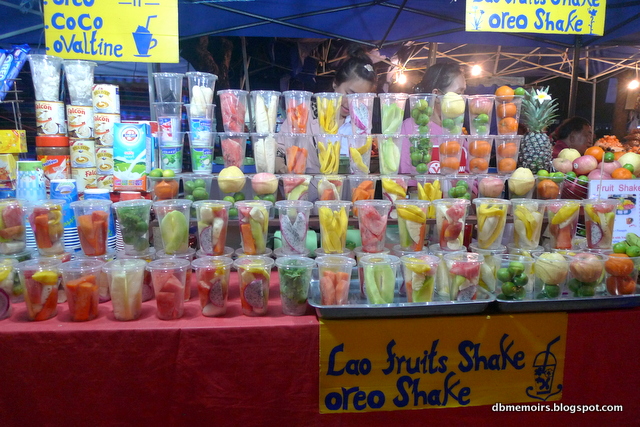 Conclusion: I must say that Luang Prabang is not really a foodie destination, but there are a few gems like the salad, the pizza and the beer. I was grateful that in general, the food was edible and reasonably priced. Don't you just hate it when you go to a beautiful place and the food is yucky?
Posted by Unknown at 12:48 PM
Email ThisBlogThis!Share to TwitterShare to FacebookShare to Pinterest
Labels: food, laos, luang prabang, southeast asia, travel