hands off my uterus

This is a direct quote from Carlos Caldran's blog, Walk This Way:


The Reproductive Health Bill is not a new bill.

It's no secret that the RH Bill has been languishing in Congress for the last 16 years.

And unfortunately, the problems we face today are not new as well.

Because after all your fancy words have been said and done, your economic numbers and scientific data thrown about, one thing will remain for sure: outside on the streets, life is a living hell for a majority of Filipinos.

We’re still plagued by high infant mortality, high maternal deaths, overpopulation, & a skyrocketing HIV and abortion rate and it’s the worst it’s ever been in our history.

And for the last 16 years, people in Congress have been trying to pass the RH Bill, a piece of legislation that would holistically address these issues. And this bill has been held back, delayed, and shot down by Anti-RH lawmakers such as yourselves for reasons that were either legal, economic, or religious.

But it also seems that for the last 16 years, these problems that I have mentioned have gotten worse. So tell me, your honors, if your alternate solutions to the RHBill are so great, why haven’t you implemented them in the last 16 years? Why haven’t I felt its effects on a national scale? Your honors, tell me: After 16 years, why are we STILL where we are?

And since the RH bill has been shot down so many times by lawmakers like you, in effect, we have been trying it your way for the last 16 years and we haven’t seen any tangible results at all. The mortality numbers are still there and staring at us in the face.

So as a member of the public and as your boss – so to speak – allow me to say that either your solutions to these problems have failed, you aren’t doing your job, or you are just plain ineffective as public servants.

I sincerely believe it is time for us to try a different strategy, a new one. We don’t have much choices anymore. Your side has never really presented us with any. It is time to turn away from this ineffectiveness of the last 16 years. It is time to activate the RH bill and let the power of education, information, and choice create a better Philippines before it’s too late.

Because unless you Anti-RH lawmakers can present a cohesive, concrete plan of action to solve these problems holistically TODAY and right now. I’m not going to wait for another 16 years.

Let the RH Bill start doing it’s work or get out of the way. Because if you have no better solutions, then you are just part of the problem.

Meanwhile, another one of my favorite Filipinos, Miriam Defensor-Santiago, brilliant senator and erstwhile crazy person, had this to say: 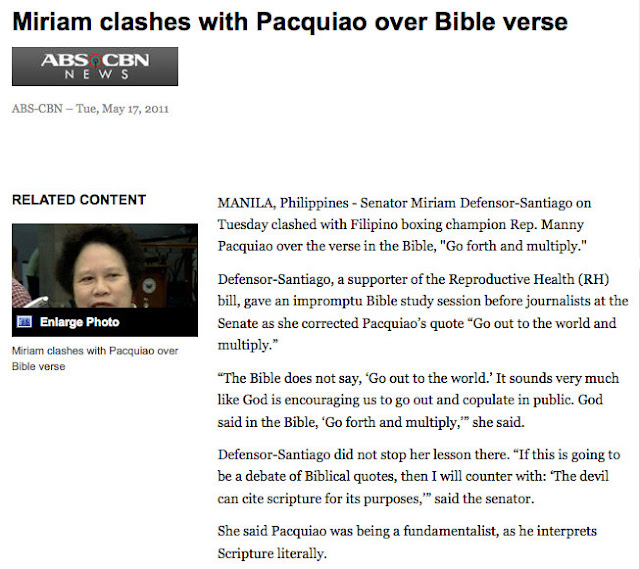 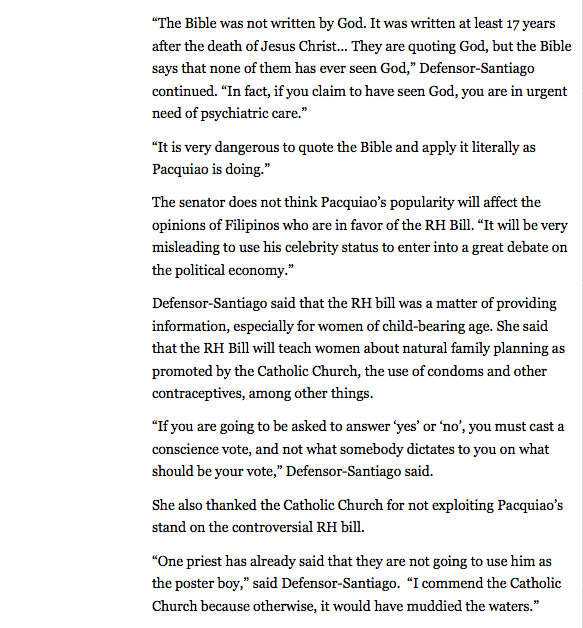 Don'tcha just love her? Miriam can very easily beat up Manny, and with one hand tied behind her back.

Meanwhile again, it seems like Jinkee Pacquaio is going to hell, too. Along with, oh, MILLIONS of Filipino women. 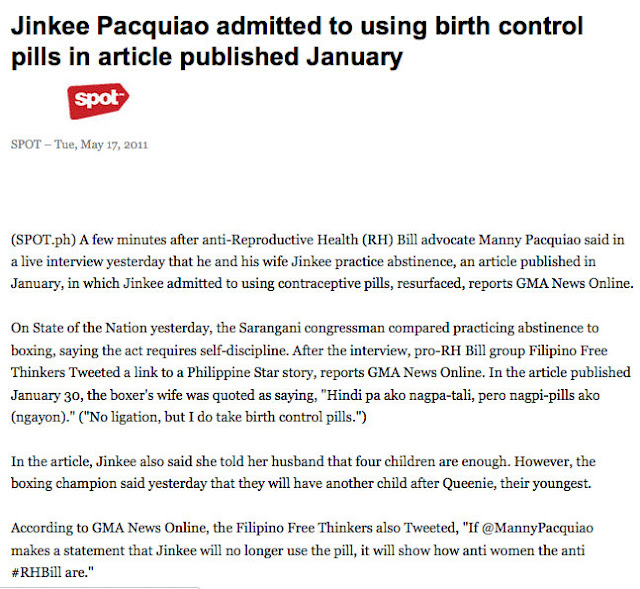 Just a few hours ago, when asked if his wife is still on the pill, our Pambansang Kamao (literally, "National Fist") Manny Pacquaio answered, "Not anymore."