Steph (with a silent H) and I have been friends since we were seven years old, when we were classmates in first grade. Even though we've lived in different places for more than half of the time that we've known each other, we've kept in touch. One of the things that we enjoy doing together is eating. Her hubby the Cookie Monster says that we eat too much. That doesn't stop him from joining us sometimes, though.

Two months ago, the two of us went to In-yo Fusion Cuisine. I normally ignore the degustation menu, but this time, we were too hungry to think. That's when the degustation menu comes in very handy, because one doesn't have to choose. Just sit down and eat whatever's served, and trust that the chef is not an idiot.

The first course was supposed to be Wasabi Fried Oyster, but they didn't have it that night. I don't remember what was served instead. It was pretty, but I guess not memorable. 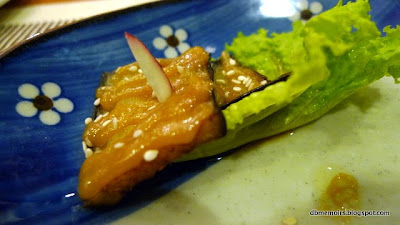 Next came the Shiitake Confit Salad. I liked the crispy tofu, and the ponzu honey dressing was delectable, and not overpowering. 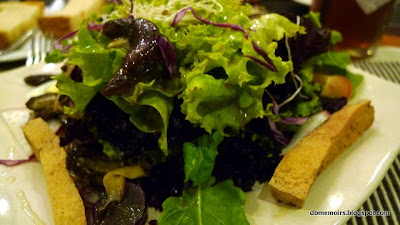 The soup was a choice between the Smoked Tomato Soup or the Pumpkin Soup. Honestly, we couldn't tell the difference, although both were satisfying and the texture was spot-on. 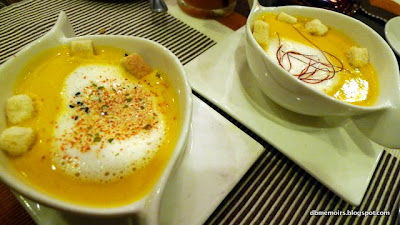 Next was a tiny scoop of sherbet to cleanse the palate, but I couldn't tell what flavor it was. The waiter told us, but maybe I wasn't listening. 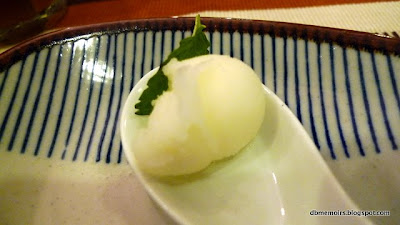 For my main, I chose the Mesquite Smoked Duck Breast served with braised cabbage in a tart shell. I don't normally like cabbage, but this was OK. The duck was tender without being bloody. 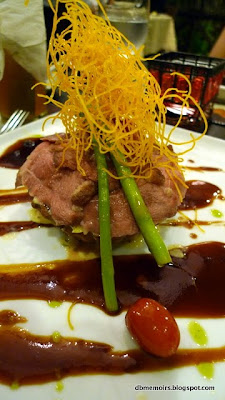 Steph's (still with a silent H) entrée was the U.S. Hanging Tender Steak with pumpkin risotto. If I go back to In-yo , I would order this. Good value. 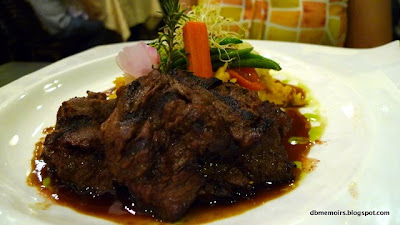 Finally, dessert. Choice number one was Mango Pavlova which didn't look like a pavlova at all. Good thing because I'm not a big fan of meringue which I feel is just a sad way to use leftover egg whites. This one was more cake-like and substantial. I enjoyed it. 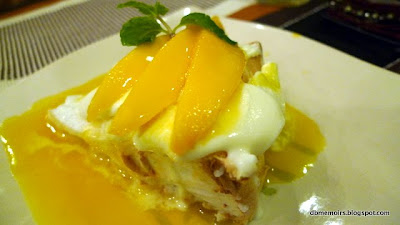 Choice number two was Burnt Cream which most people would recognise as a creme brulée. It was OK lang. 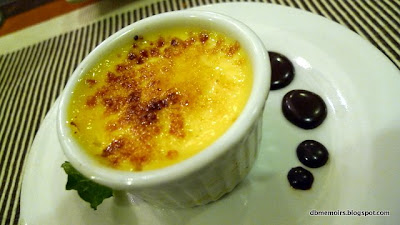 Verdict: Chef Niño Laus is not an idiot. His degustation menu is well-balanced, tasty and has some considerate options. (The other entrée choice was fish.) At PHP1,500++ per person, it was not bad at all. I think part of what we paid went to the ambiance. (Who ordered the ambiance? Hehe.) It was just unfortunate that there was this loudmouth sitting next to us who just lo-ooved the sound of his voice. It's a small place, and eavesdropping is too easy. Still, the food is worth going back for.
Posted by Unknown at 4:21 PM
Email ThisBlogThis!Share to TwitterShare to FacebookShare to Pinterest
Labels: food, manila, travel