You know how you get a scratch on your leg and it bleeds a bit? You wash it and put some ointment on it and after a while, the wound starts to heal with a little scab. And then you pick at it and pick at it until it bleeds again. Then more scabbing. Then more picking and bleeding. And from the initial pain, somehow it begins to feel good, and you just can't help yourself.

Reading Cormac McCarthy's Blood Meridian is just like that. 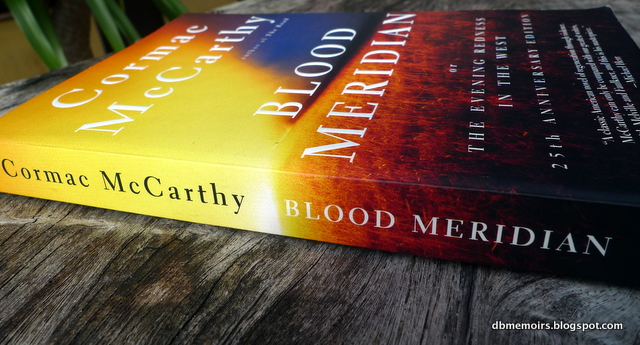 It has taken me months to finish this book. It's only 351 pages, but they're the most painful 351 pages I've ever had the pleasure of reading.

The setting is the wild, wild west. The year is 1849. The language seems to be English but I guess it is more accurate to call it "American". The hero is "The Kid" who later becomes "The Man"-- no name. The supporting cast consists of a bunch of American scalp hunters, some Indians (the native American kind) and a few Mexicans. They all spend 23 chapters maiming and killing one another.

Blood Meridian is unlike any cowboy-injun story I've ever encountered. Case in point: "... one of the Delawares emerged from the smoke with a naked infant dangling in each hand and squatted at the ring of midden stones and swung them by the heels each in turn and bashed their--" You can imagine what happens next.

Oh, this book is full of stuff like that.

But besides the physical violence, other forms of violence are highlighted. Like this: "Whatever exists, he said. Whatever in creation exists without my knowledge exists without my consent... The judge placed his hands on the ground... This is my claim, he said. And yet everywhere upon it are pockets of autonomous life. Autonomous. In order for it to be mine nothing must be permitted to occur upon it save by my dispensation."

His characters make a sick kind of sense: "Moral law is an invention of mankind for the disenfranchisement of the powerful in favor of the weak. Historical law subverts it at every turn. A moral view can never be proven right or wrong by the ultimate test. A man falling dead in a duel is not thought thereby to be proven in error as to his views."

Here's another pronouncement: "If God meant to interfere in the degeneracy of mankind would he not have done so by now? Wolves cull themselves, man. What other creature would? And is the race of man not more predacious yet? The way of the world is to bloom and to flower and die but in the affairs of men there is no waning and the noon of his expression signals the onset of night. His spirit is exhausted at the peak of its achievement. His meridian is at once his darkening and the evening of his day."

Isn't that how serial killers and genocidal maniacs think? But you can't say that it is false.

It is painful to read this book, because the truth hurts. Many times I had to put it down for a few days-- it hurt my eyes, my heart, my head. But at the same time, Blood Meridian is a beautiful book, because the truth is beautiful. When I turned to the last page, I felt my spirit soar. I felt like I had survived some kind of ordeal, and that somehow, I had become a happier person. It was similar to picking off a scab to reveal the new skin underneath.

I'm just not sure if I should read another Cormac McCarthy book. I don't know if I can take any more truth.
Posted by Unknown at 2:30 PM
Email ThisBlogThis!Share to TwitterShare to FacebookShare to Pinterest
Labels: books