reeling in the years

It rained on and off the whole day in Cebu City on 11 October 2011. Which really wasn't a problem. Most people go to Cebu for the beaches, but that doesn't appeal too much to me. After all, I live on an island with the most famous beach in the Philippines.

Instead, I accompanied Bunny Rabbit on his trip down memory lane. First stop, the Cebu campus of the University of the Philippines. Apparently, not much has changed since the 1970s. 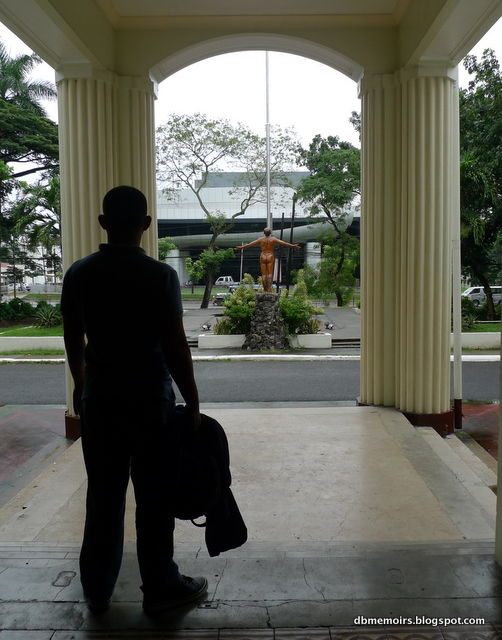 The outdoor art was new... or newish. Well, they weren't there 34 years ago. 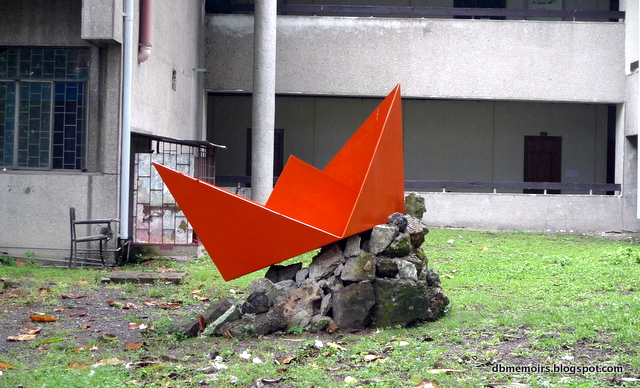 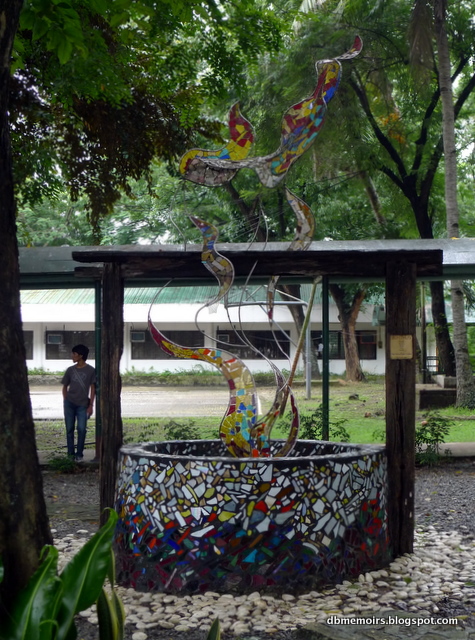 Thomas Wolfe wrote that you can't go home again. We found Bunny Rabbit's childhood home still intact in front of the Waterfront Hotel, but it wasn't a residence anymore. 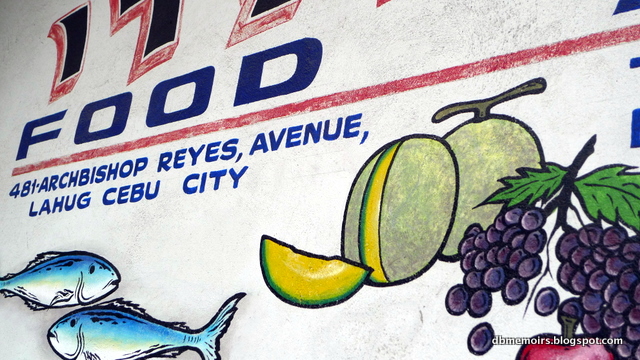 We rode nine jeepneys that day, mainly because we were trying to figure out where we were going as we went along. But I must say that Cebu has a pretty good public transport system.

In keeping with the day's 1970s theme, I decided that we should eat at Larsian in the Fuente Osmeña area. It seemed like the 50 or so stalls under the tent all served the same things, so we just chose one at random.

As soon as we sat down, a girl placed some puso on our very long (good for 30 people at least) table covered in sheets of green plastic. A puso is "a serving of rice that has been wrapped in a woven coconut leaf pouch and boiled. As the rice cooks, the grains expand to fill the pouch and the rice becomes compressed. This method of cooking gives the puso its characteristic form and texture of a rice dumpling." Source 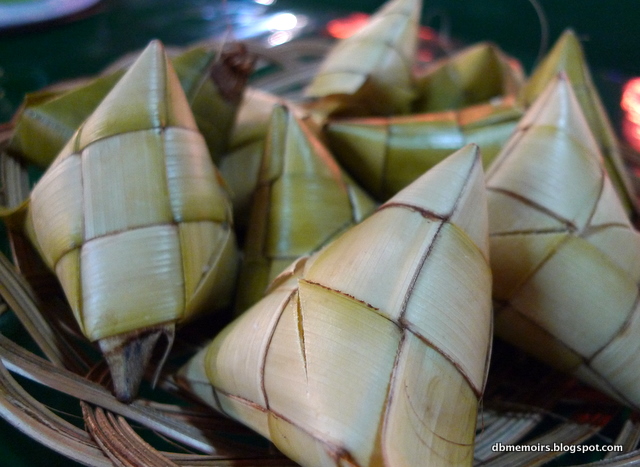 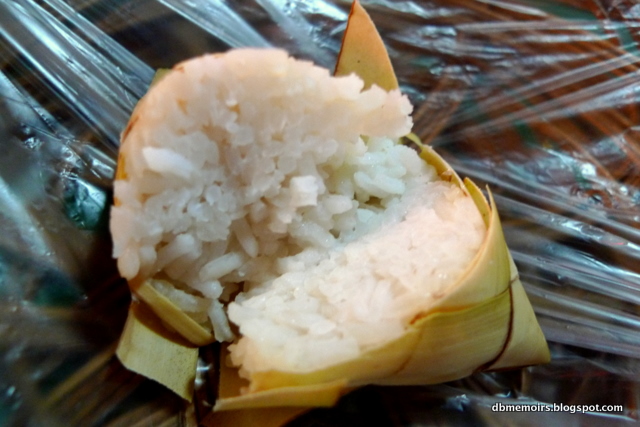 I ate three of them. Hey, they used to be much bigger.

Bunny Rabbit wanted some seafood. I have no idea what kind of fish it was, but it was extremely fresh, naturally sweet and expertly grilled. I could eat fish like this everyday. 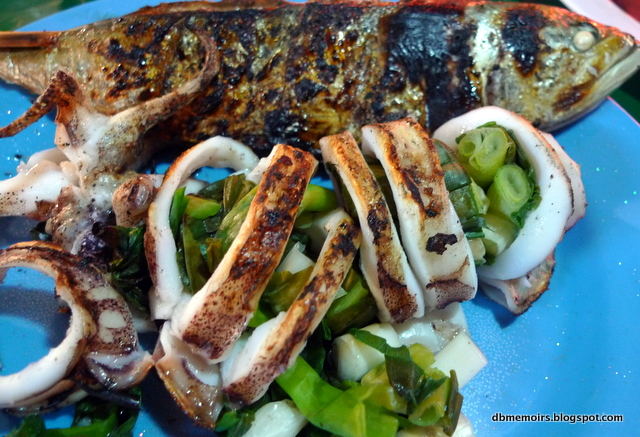 The grilled squid stuffed with whole spring onions was interesting. Cebuanos use a lot of spring onion. I noticed even Zubuchon's lechon was stuffed with it. It's not as zingy as regular onion, but it has an herby fragrance that reminds me of... spring. It's not as earthy as the usual onion that grows under the ground. It tastes like a bit of sunshine. OK, OK, I know that's not very inspired writing, but it's true. Go and taste something stuffed with spring onion and you'll know what I mean.

The squid? Perfectly done, still tender and had a nice smokiness.

The main event, however, was the assorted grilled bits and pieces, all smeared with a violently red barbecue sauce. Again, the grill guy showed his prowess. Masterfully grilled, from left to right, that's two sticks of chicken skin, pork and the last stick is chorizo (or longganisa to Tagalogs). 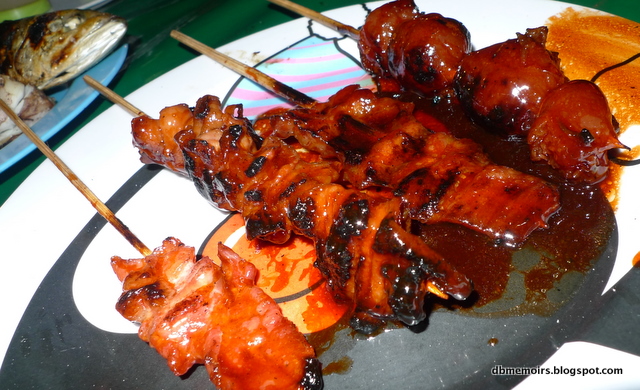 Verdict: Everyone raves about Larsian's barbecue or sugba. The food was happily above average, but I'm pretty sure that half of my enjoyment of this meal was due to the carnival-like atmosphere. Yes, Larsian is a fun place to people watch while sipping an ice cold beer and munching on delicious tidbits. And here's the clincher: Our entire meal, with two bottles of frosty Coke, cost a measly 180 pesos, or about US$2 per person. Would I go back? Hell, yeah!

Larsian (one of them) is located in the Fuente Osmeña area, very close to Chong Hua Hospital. There's always smoke wafting out from it, so you can't miss it.
Posted by Unknown at 5:48 PM
Email ThisBlogThis!Share to TwitterShare to FacebookShare to Pinterest
Labels: cebu, food, travel, visayas