there and back again

We drove the old L300 van from Caticlan to Kalibo in Aklan province-- then south through Capiz province, to Iloilo City and its environs (Molo, Villa, Guimbal, Miagao and San Joaquin)-- headed north to San Jose de Buenavista and Pandan in Antique, and then back to Caticlan. We followed the coastal highway all the way around Panay Island, which is 12,011 square kilometers in area.

Click to enlarge.
There were quite a few things that went wrong, e.g.

1. The passenger door didn't have a lock.
2. The registration and insurance papers were missing.
3. We got a flat tire in the middle of nowhere.
4. It was raining buckets when we were changing the tire.
5. The car did not have a parking brake. It just didn't have one. It was gone.
6. The fan belt screeched sporadically, usually when we were stopped in traffic and all the neighboring cars could hear our noise and give us the evil eye.
7. Our maximum speed was 60 kph in fifth gear. Our average speed was 40 kph. Later we found out that this was due to the gas pedal being stuck. It couldn't go all the way down to the floor. We could not "floor it", basically.
8. When we tried to move the gas pedal to its proper position, the whole thing broke off.
9. We got stuck in a mudhole and had to be rescued.
10. When it rained-- which it did most of the time, the space behind the head rests leaked.

But we made it! 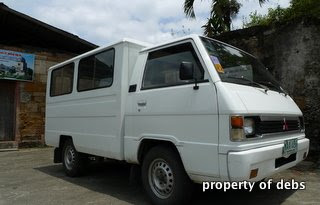 We found a mechanic who was able to reattach the gas pedal and silence the screaming fan belt. 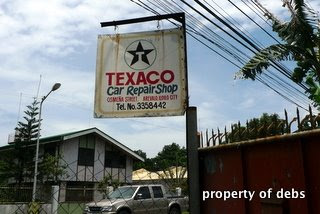 The best mechanic in Panay is here.
Posted by Unknown at 8:10 PM
Email ThisBlogThis!Share to TwitterShare to FacebookShare to Pinterest
Labels: antique, capiz, iloilo, panay, travel