From Wikipedia: "Batchoy is a noodle soup which originated in the district of La Paz, Iloilo City. As with most noodle dishes in the Philippines, batchoy may have been first concocted by Chinese immigrants. Ingredients include pork organs (liver, spleen, kidneys and heart) crushed pork cracklings, vegetables, shrimp, chicken breast or beef loin, shrimp broth, chicken stock and round noodles or miki. The noodles are similar to spaghetti, but are generally a bit finer."

I read about this batchoy place in the La Paz market, where this yummy and hearty soup was said to first see the light of day, but we never got there. Instead, we tried Deco's. 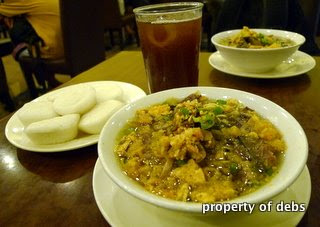 It was pretty good. Compared to the other chain, Ted's, I think Deco's is more generous with the recado (ingredients). Taste-wise, they are both delish. But that La Paz market is calling out to me.

Next time.
Posted by Unknown at 11:56 AM
Email ThisBlogThis!Share to TwitterShare to FacebookShare to Pinterest
Labels: food, iloilo, panay, travel