We arrived in Bangkok at noon on 10 June 2013 and took the bus to Chiang Mai in the evening. In 2012, we took the train (read about it here) and although I wouldn't say that it was not enjoyable, I didn't feel like doing it again. The VIP bus cost the same as the train, 836 baht per person one-way, but unlike the train it was on time. Our bus pulled out of Mo Chit Bus Terminal at exactly 9PM and nine hours later, as promised, we were in Chiang Mai!

We couldn't check in at our guesthouse at 6AM yet, so we just dropped off our bags and had breakfast at Funky Dog Café. Afterwards, we went exploring on foot. Last year, we were in Chiang Mai for only two nights and spent most of the time outside the city, so I was pretty excited to finally see what was inside the old city walls.

Our starting point was Tha Phae Gate and while walking down the main thoroughfare, Rachadamnoen Road, we saw a beautiful old house which turned out to be the office of the Lanna Architecture Center. The building itself is called Khum Chao Burirat ("khum" means royal residence) and it is wonderfully preserved and restored. It reminds me of our Philippine "bahay na bato"-- concrete first floor, wooden second floor, high ceilings and a wrap-around veranda for whiling away warm tropical afternoons. 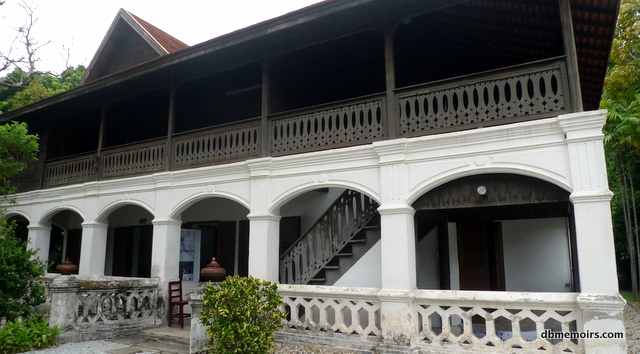 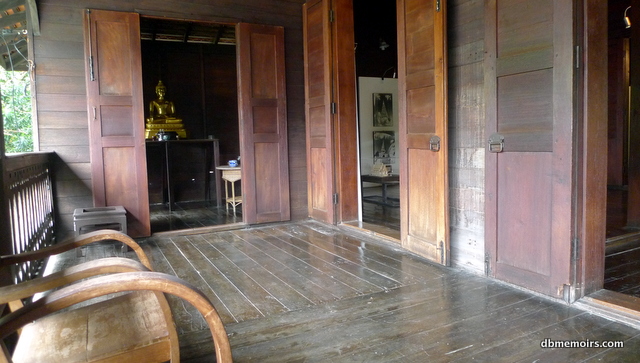 Just a few meters from the house is Wat Chedi Luang, a very important temple and the site of the Inthakin City Pillar Festival which was being celebrated that very week. I'm abashed to say that I didn't notice any pillar (Sao Inthakin) at all, just the huge stupa in the center with the top part broken off. I tried to appreciate the architectural and artistic elements as much as I could but truthfully, after meeting Angkor Wat in person during my trip to Siem Reap in 2011, all other temples pale in comparison. Sowee. 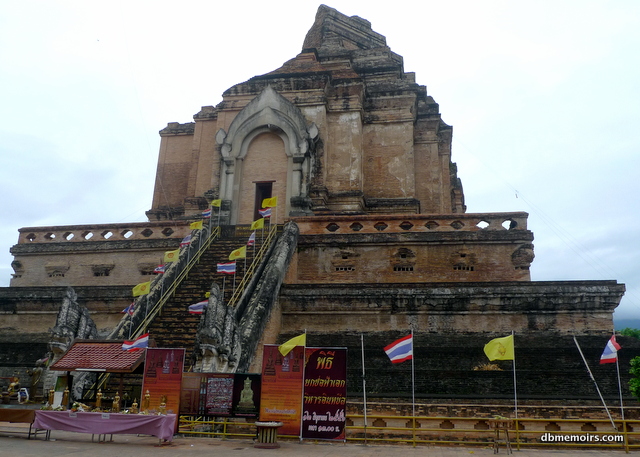 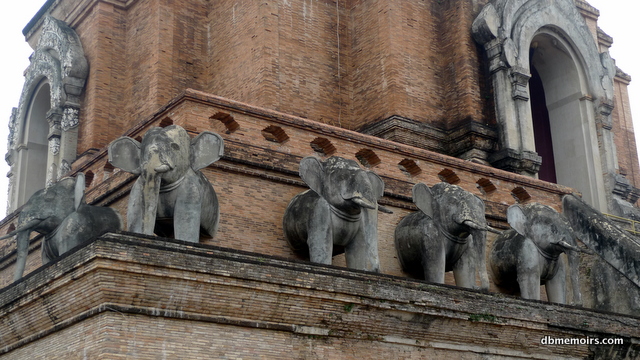 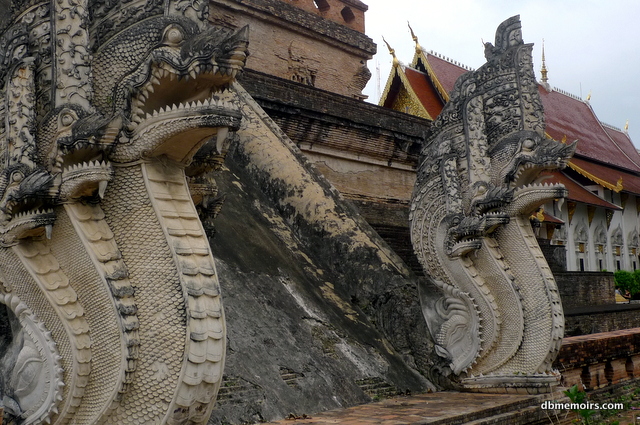 I found the rituals and customs very interesting, though. 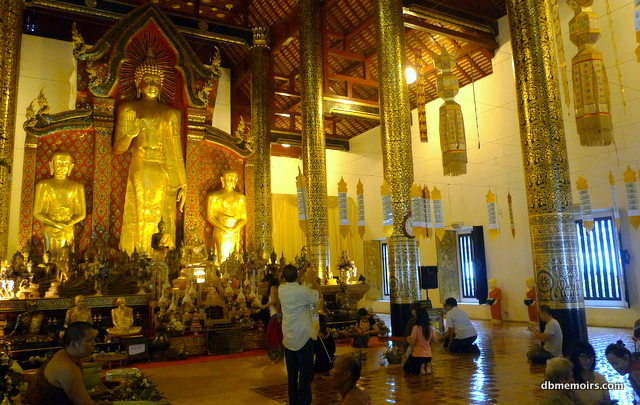 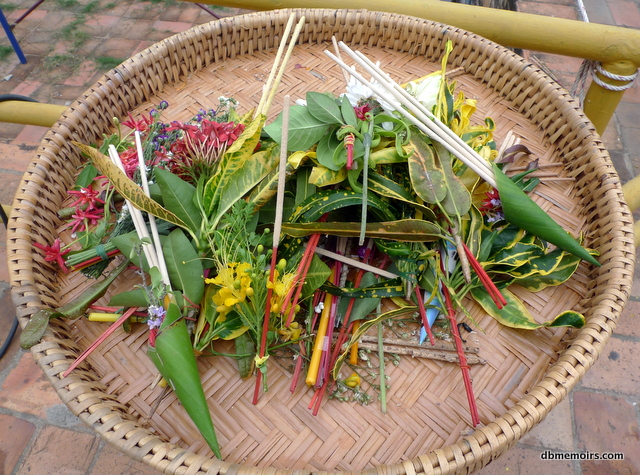 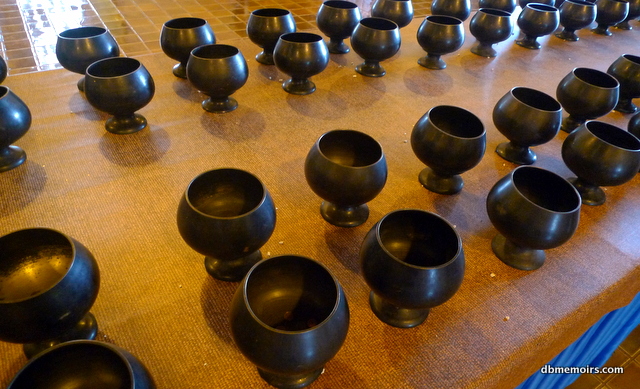 Lunch was at a nameless eatery that we chose at random. We had the famous Chiang Mai curry noodle soup, khao soi, and some fried rice. Each dish was only 35 baht (a little over US$1) and really hit the spot. This is what I miss most about Thailand: You can never have a bad meal, even at the cheapest, simplest hole-in-the-wall. 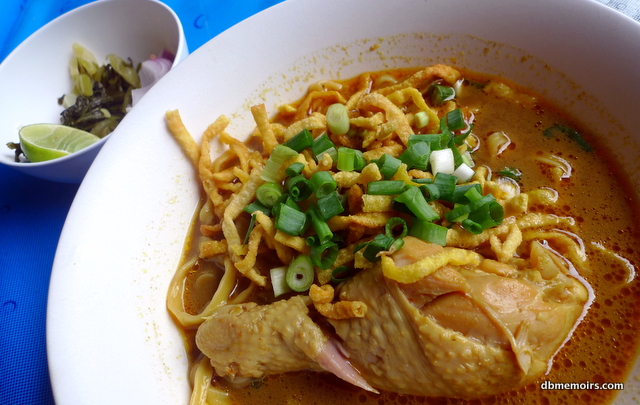 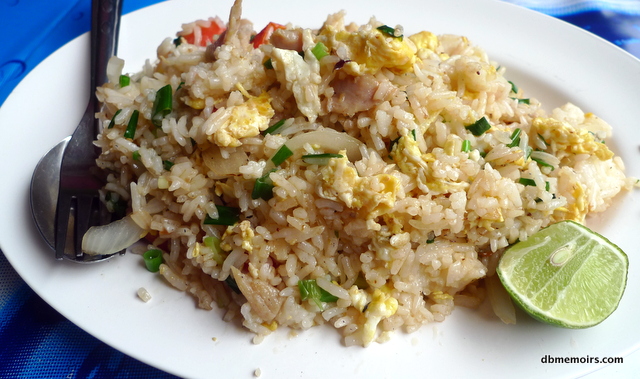 It was still too early to go back to the guesthouse, so we decided to take a look inside the Lanna Folklife Museum. We paid 180 baht (almost US$6) per person for the special ticket which allowed us to visit the Chiang Mai City Arts & Cultural Centre and the Chiang Mai Historical Museum as well, which we did two days later. But the first museum was the best of the three, incorporating both history and culture in its exhibits. For more information, read this. 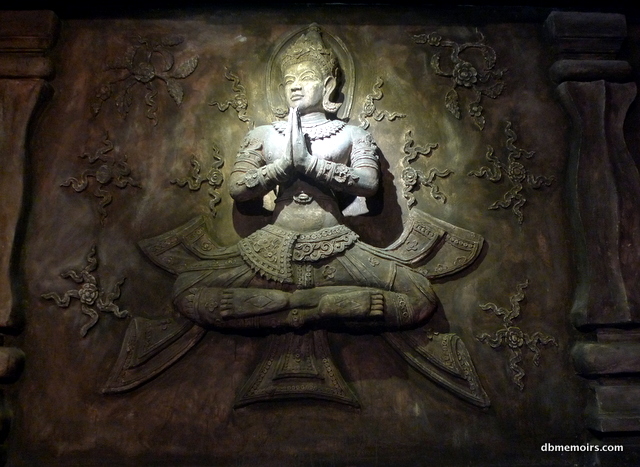 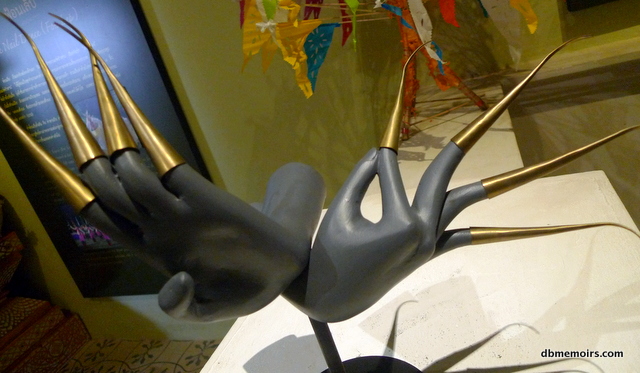 At 2PM, we figured that our room would be ready. We made our way back to Funky Monkey Guesthouse, took a shower, had a great massage next door and then dinner at The Moat (which I blogged about here).

All in all, a good first day.
Posted by Unknown at 10:42 AM
Email ThisBlogThis!Share to TwitterShare to FacebookShare to Pinterest
Labels: chiang mai, food, southeast asia, thailand, travel