I was pretty excited. I like trains. They're romantic, cheap and convenient. Usually.

We arrived at Bangkok's Hua Lamphong Station an hour before our supposed departure, only to be told that our voyage would be indefinitely delayed because authorities were still cleaning up a railway accident that occurred the previous day. 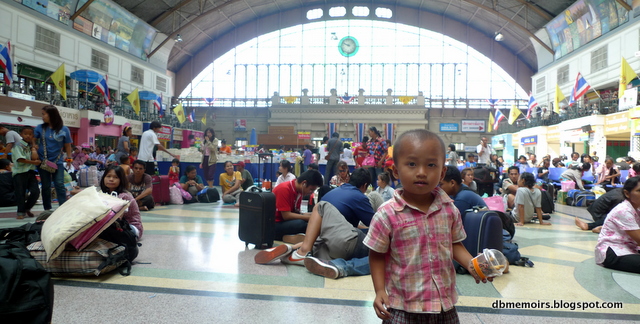 We went straight to our platform and were relieved to see that number 13 was already accepting passengers and cargo. Yes, we were going to be delayed, but at least our train was just waiting for the green light and ready to go.

At the train station's food court, we had some super excellent delicious Pad Thai. It was probably the best Pad Thai I had in Thailand, and for only 40 baht (US$1.25), probably the cheapest. 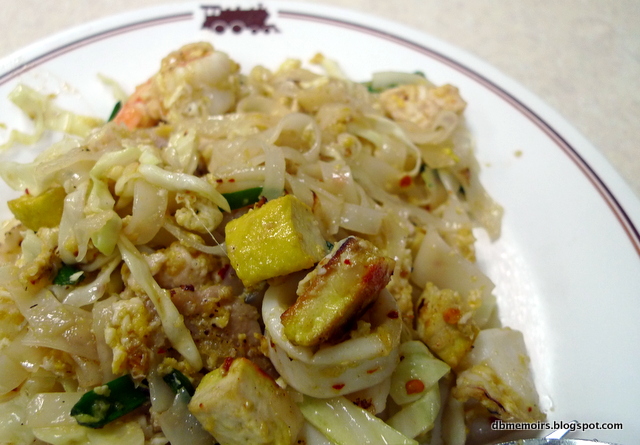 We pulled out of the station at 10PM. I calculated that we would arrive in Chiang Mai at 12:15PM, just in time for lunch. No problem.

The next morning, Bunny Rabbit, being an early bird, took some pictures of the beautiful sunrise.


We found the restaurant car which was filled with smokers nursing their cups of coffee. A Swedish guy once told me that he hardly smokes at home, but he lights up every chance he gets while on holiday, and especially when traveling around Asia. 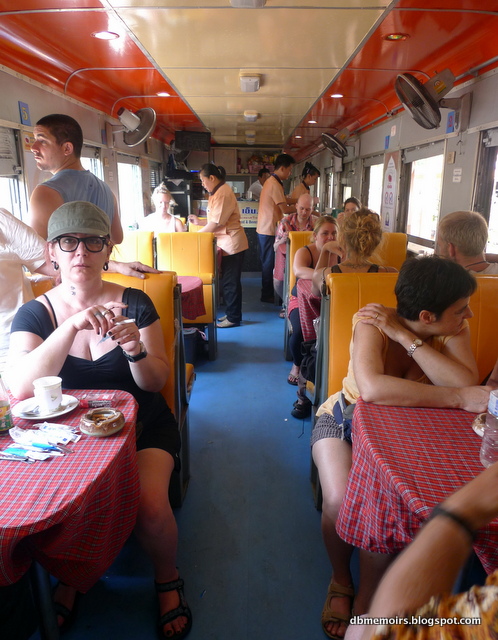 I ordered the breakfast set-- 120 baht or US$3.80-- which consisted of "rice soup" (congee), coffee, orange juice and fresh pineapple slices. We realised that the food and beverages on the train were overpriced. A tiny cup of coffee cost 40 baht (US$1.25), but it's not like you have a choice.

I just had to include the bearded backpacker guy in my photo. He definitely enhanced the ambience. 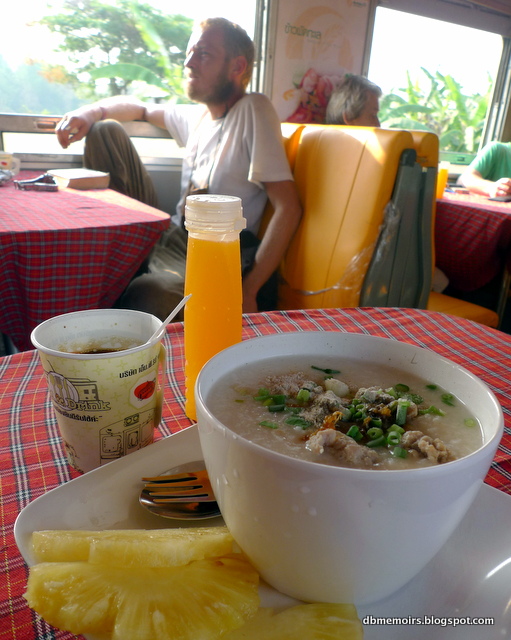 After breakfast, we went back to our comfortable sleeping berths and settled in to wait for the conductor to announce that we were in Chiang Mai. 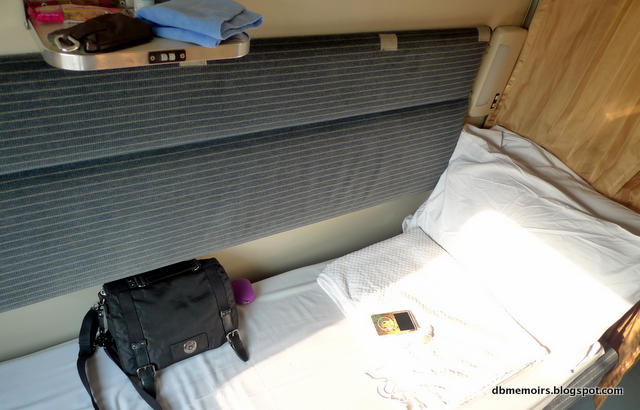 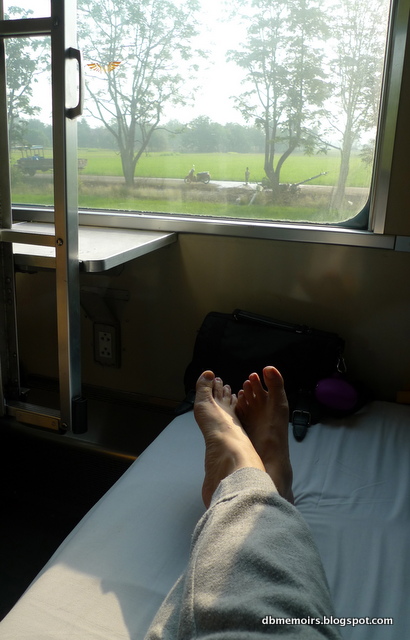 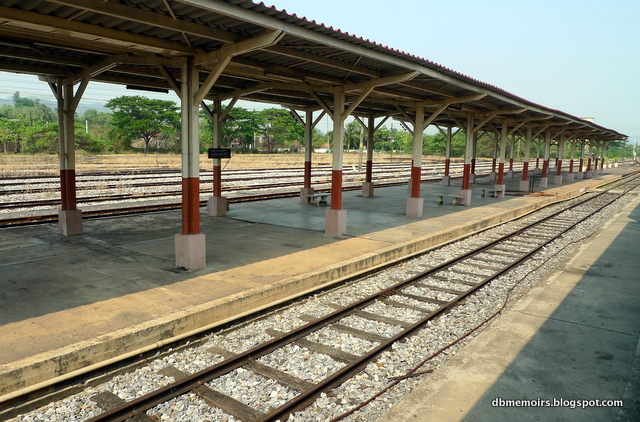 The scenery was breathtakingly stark, and there were hardly any people. The temperature outside was a scorching 40 degrees Celsius. I was so glad that I got us second class tickets which meant that our coach was air-conditioned.

We still hadn't arrived at our destination by noon. It was time for lunch. We ordered "room service" from the restaurant and paid 270 baht (US$ 8.50) for a Khao Pad (fried rice) and a Khai Jeow (Thai omelette) with white rice which they delivered to our coach. Relatively expensive, but yummy.

How do the Thais make such tasty dishes out of the simplest ingredients? 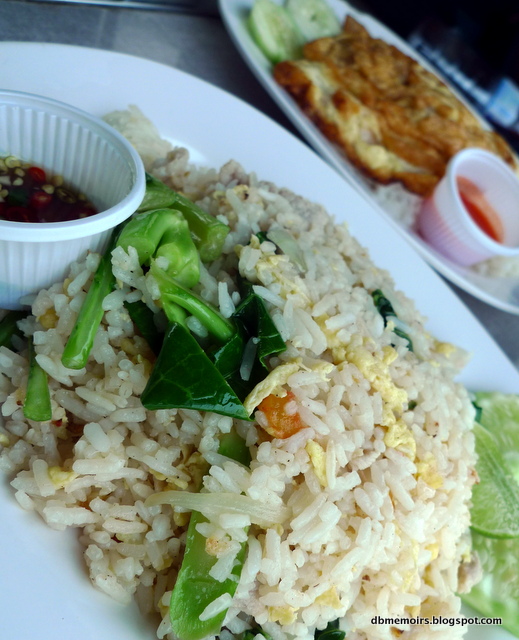 We finally got to Chiang Mai at 2PM. Nuy, the owner of our guesthouse Funky Monkey, told us that the train was ALWAYS late. Well, I didn't know that. The writer of my online reference seat61.com, while enthusiastically advocating the joys and wonders of train travel in Thailand, didn't mention that at all.

No matter. We got where we wanted to go, even if we were four hours behind schedule. And even though the AC conked out the last hour of our journey and it was so hot that we felt like we were being roasted in a gigantic oven.

On Saturday, 28 April 2012, we had to leave Chiang Mai. (I'll be back, I swear!) I was expecting some sort of delay again, so I was pleasantly surprised when our train left at exactly 5:55PM. 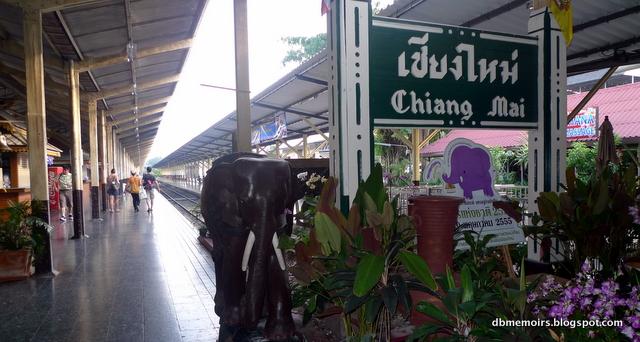 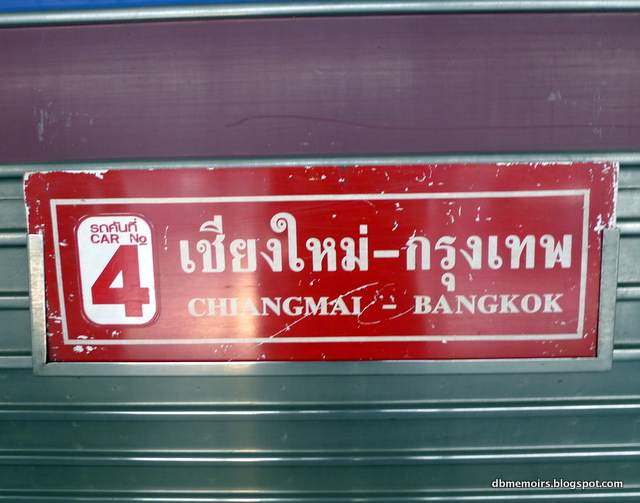 We had learned our lesson, and bought some ridiculously cheap take-away at the train station before boarding. We got stir-fried pork with rice and Pad Thai again, total 70 baht (US$2.20). The pork was tender and delectable, but I thought that the Pad Thai at Hua Lamphong was better. 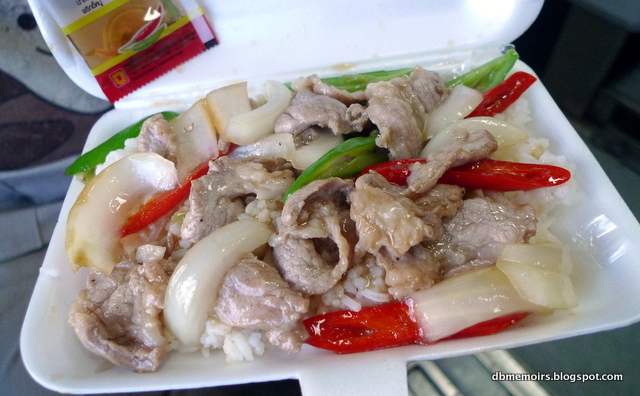 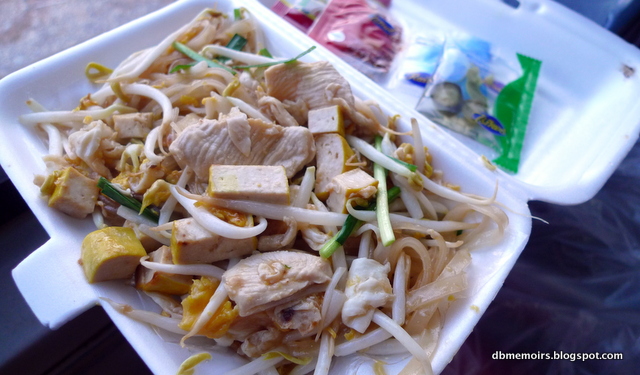 The seats and sleeping berths were set up differently on this train. A bit more modern, but just as cozy. 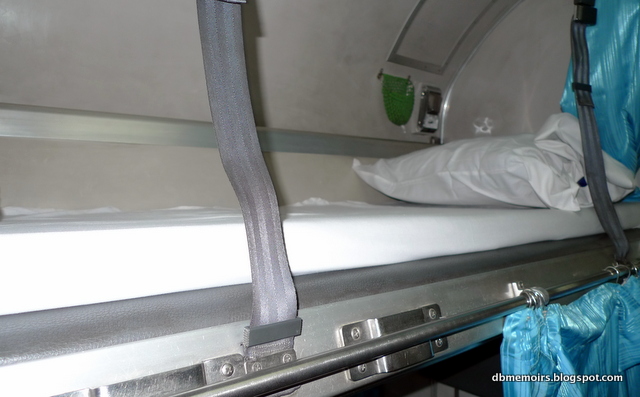 I don't know how it happened, but despite having departed right on schedule, we STILL arrived in Bangkok two hours late.

Do I regret taking the train? Not at all.

Would I do it again? Maybe. Most likely not, but I wouldn't say "never".

Would I recommend it to people who are going to Chiang Mai? Actually... yeah. The train is one of the cheapest ways to travel. I bought our tickets online at thairailticket.com for 1,800 baht (US$57) per person round trip. Trains are undeniably old-world and romantic. And in theory, convenient. Just make sure that you're not in a hurry.
Posted by Unknown at 4:58 PM
Email ThisBlogThis!Share to TwitterShare to FacebookShare to Pinterest
Labels: bangkok, chiang mai, d90, nikon, photography, southeast asia, thailand, travel