not the usual chiang mai

Actually, when we visited Wat Pha Lad on 28 April 2012, it was a whole day excursion for us. Our train back to Bangkok wasn't leaving until 6pm and we didn't really have anything planned, so we hired a songthaew (covered pick-up truck, similar to the Philippine jeepney but smaller) and went off the beaten track. 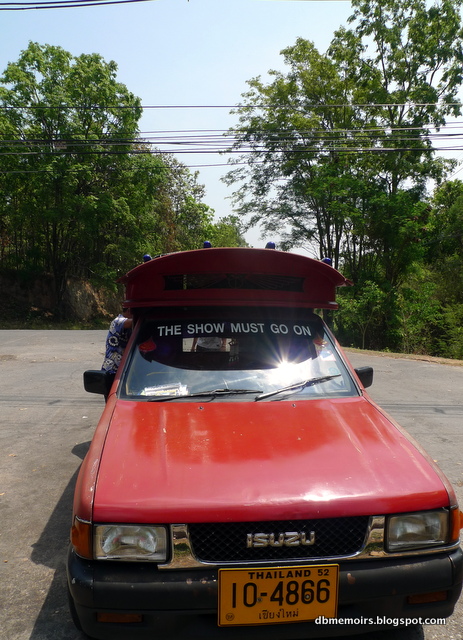 Armed with David's map, of course. 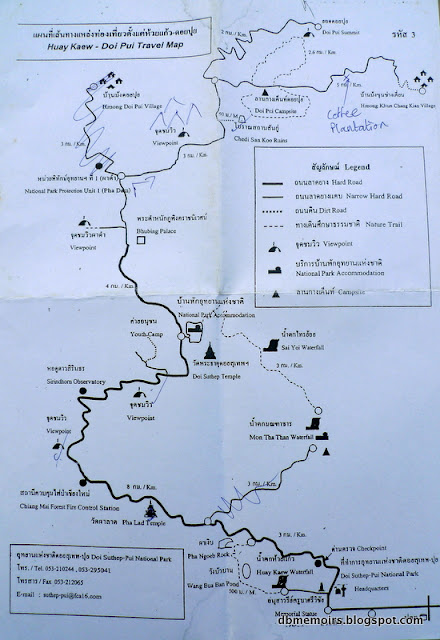 Our first stop was the lovely and peaceful Doi Suthep-Pui National Park. 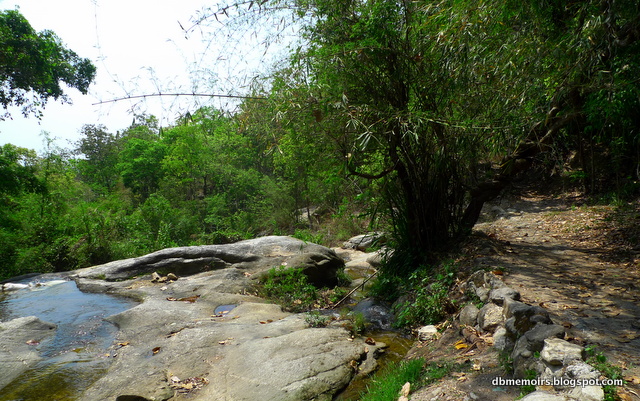 Our driver Sakhon and his son immediately jumped into the stream in spite of what the sign said. I was very envious-- it was a super hot day-- but being a bit accident-prone, I thought it best to stay on dry land. 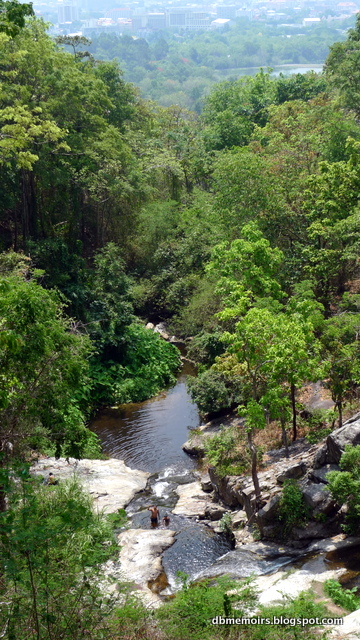 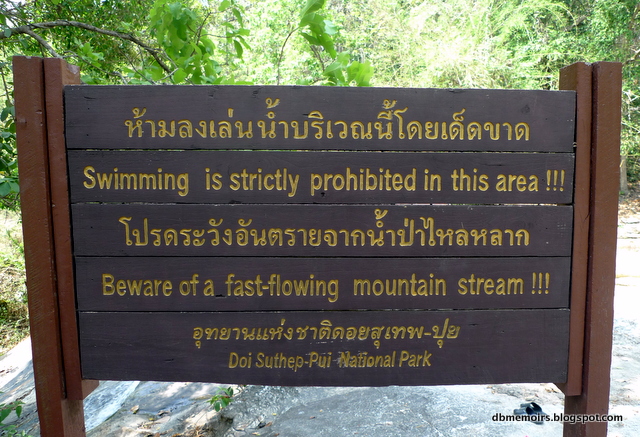 I managed to slip on some rocks and fell on my butt anyway. 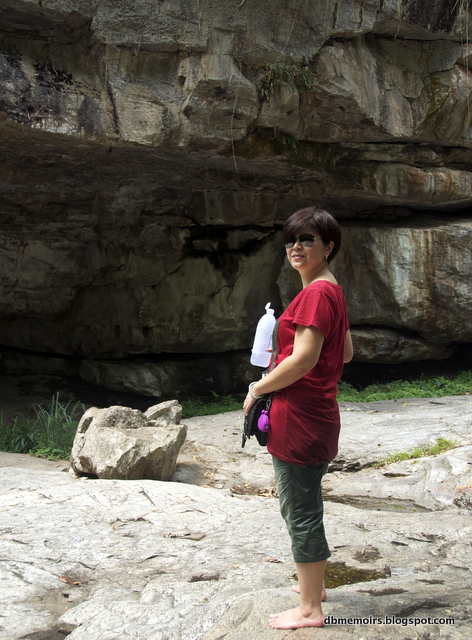 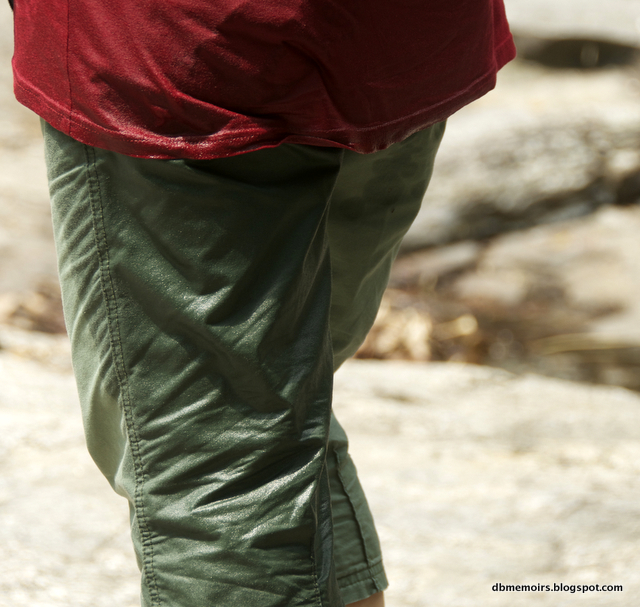 On the way to Wat Pha Lad, we paused for a while on the side of road to look at Chiang Mai. Too bad it was hazy, but if you look closely, you can make out the square shape of the old city. That's the airport on the lower right. 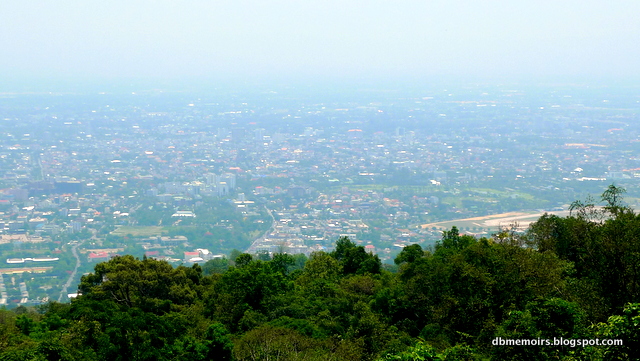 After Wat Pha Lad, we went to a rest stop to buy some food for a picnic lunch. I wanted to take the happy-looking local mushrooms home, but then what would I do with them? 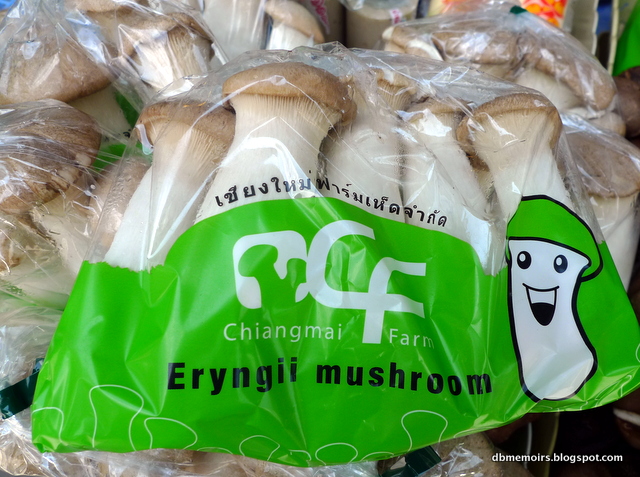 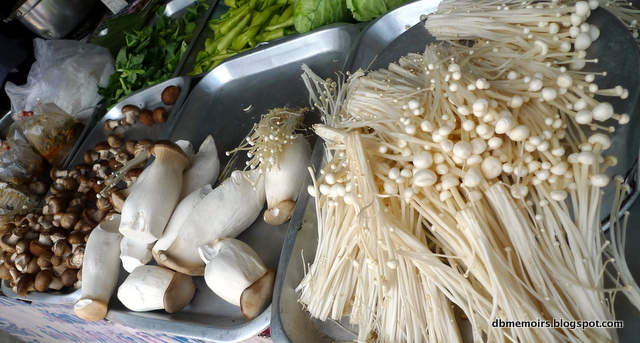 Sakhon recommended the local sausages made of pork, sticky rice and lemongrass. For that, I am forever grateful to him. They were the best sausages ever! Mildly-spiced, savory and aromatic, and absolutely mouthwatering. I'm still dreaming about them until now. 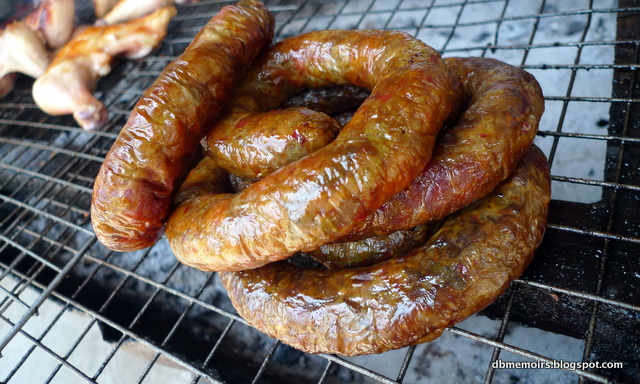 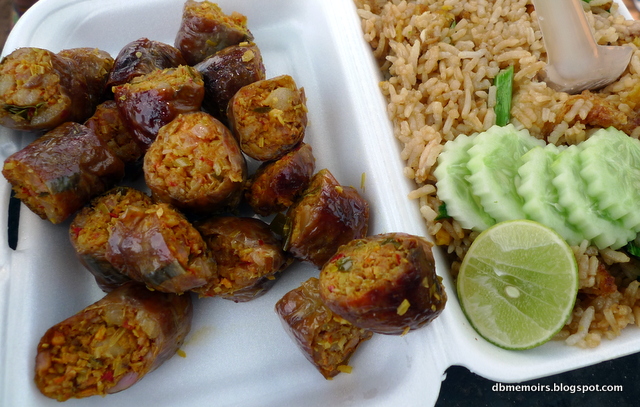 We ate our lunch on a cliff with a fabulous view. These jungle-covered mountains are part of the Himalayan foothills. 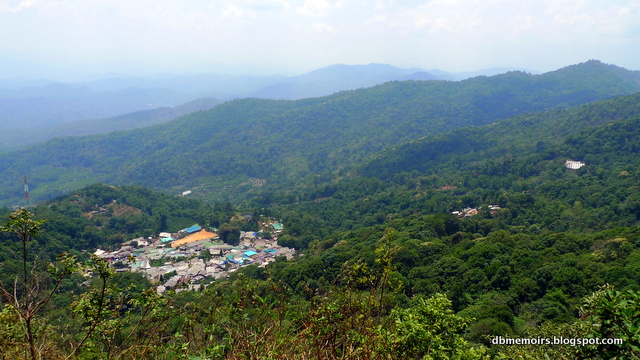 And then we drove deeper into the woods. Very Robert Frost. 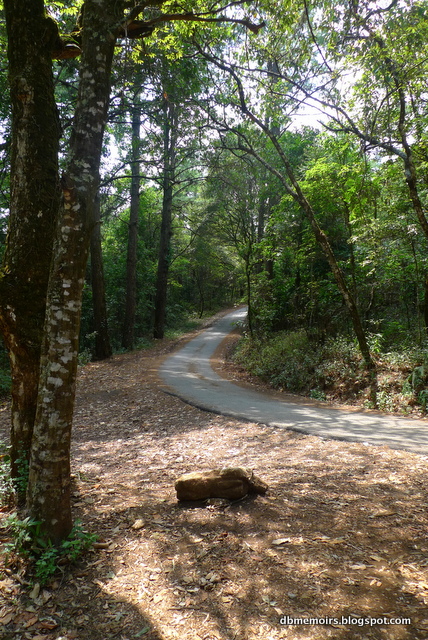 At first, the San Ku chedi (mound-like structure containing Buddhist relics) didn't look very remarkable, but I could feel a calming presence in the area. A plaque said that this monument was built in the 13th century, and people still come here to pray and leave their offerings! Now that's remarkable. 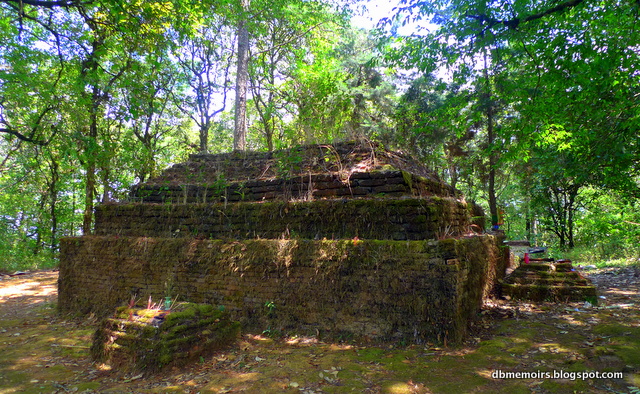 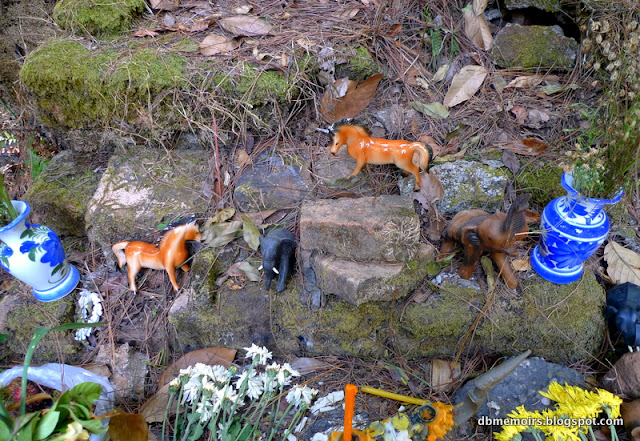 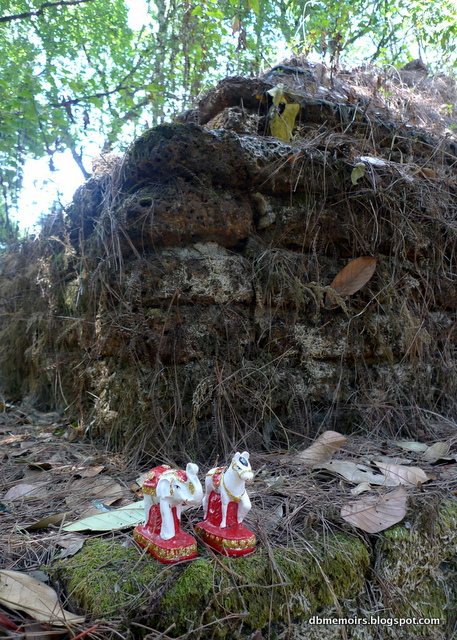 We visited the king's coffee plantation and had a nice cup of joe. As good as any Starbucks blend and much, much cheaper. 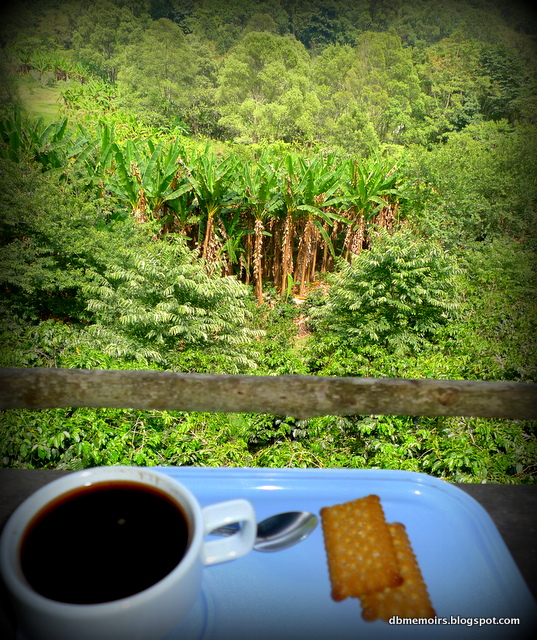 Before we had to go to the train station, we stopped for one more hazy view of the city-- the "Rose of the North". 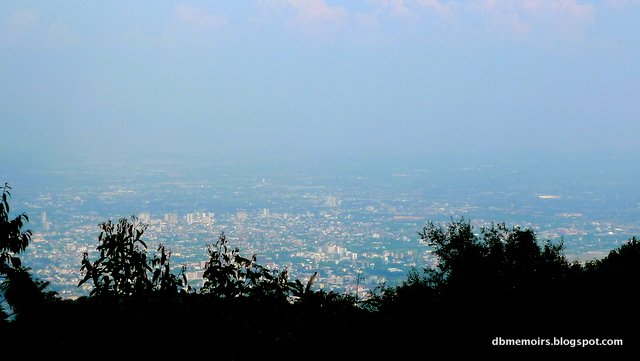 People ask me what I did in Chiang Mai. I tell them that I didn't go to the usual places or do the usual things, but I have no regrets because I had a really good time. And the best part was not having to fight the crowds of tourists, although someday I might want to. Maybe.

But for this trip, I didn't mind that the closest I got to Wat Phrathat Doi Suthep (number one most popular must-visit tourist spot in Chiang Mai) was this: 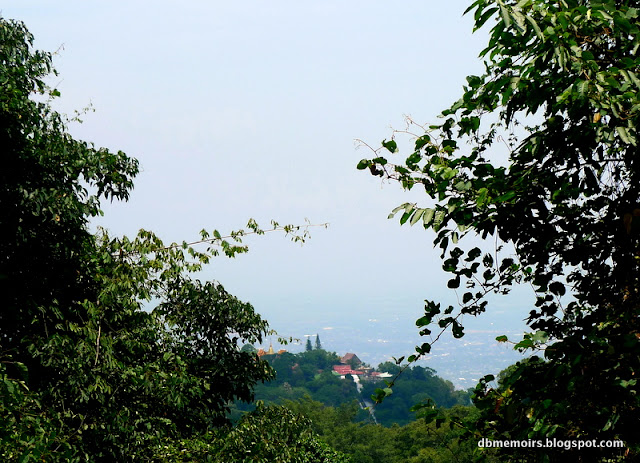