One of the weirdly wonderful things about Vietnam is Cao Dai.

OK, that sounds disrespectful, calling a religion "weird", but seriously, in this day and age of fire-breathing, join-us-or-rot-in-hell fundamentalists, a religion that accepts and even embraces the tenets of all the world's major religions and philosophies... now that's a little weird.

I decided to hire a car to go to the Tây Ninh Holy See, which is the seat of Caodaism. It would have been much cheaper to join one of those bus tours, but their itinerary is too hectic and they spend only thirty minutes in the temple. And based on my research, this place deserves much more than just thirty minutes. 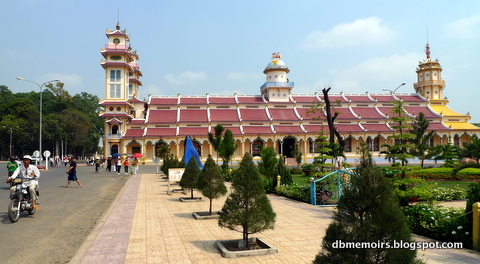 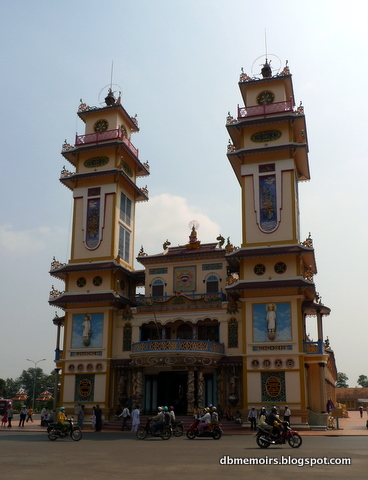 First, we checked out the exterior. Lots of happy colors and smiling lions. And eerie all-seeing eyes... Is that a horse on top of the blue dome? 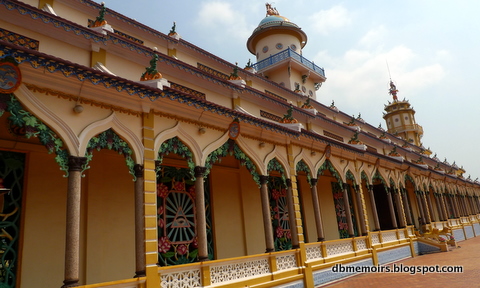 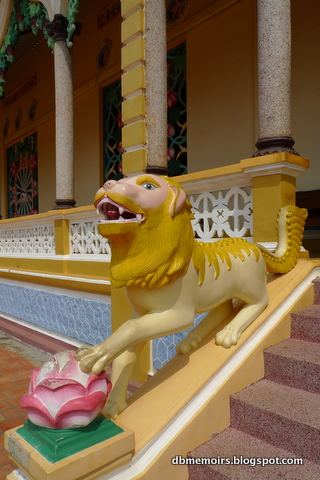 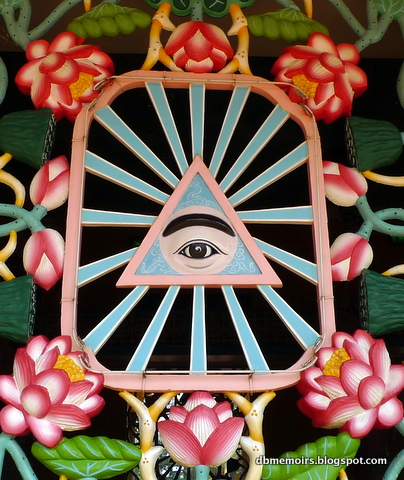 At the entrance, you are welcomed by a painting of their Three Saints: Sun Yat Sen (Chinese guy), Victor Hugo (French guy) and Trang Trinh (Vietnamese guy). And on the other side of the wall, statues of some other guys of various nationalities. I told you it's weird! 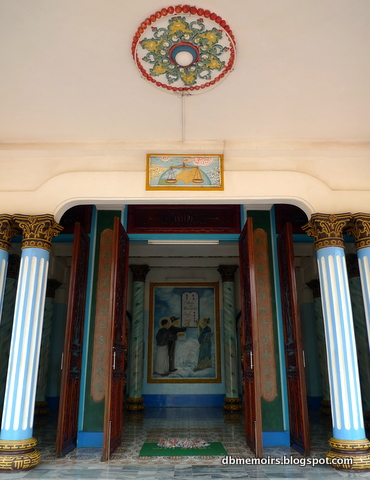 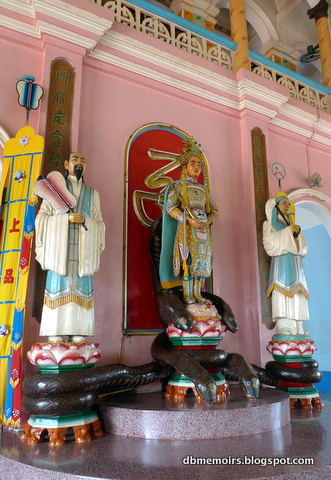 Because we were a couple of hours ahead of all the bus tour tourists, we practically had the whole place to ourselves. The place was fantastic, in every sense of the word. 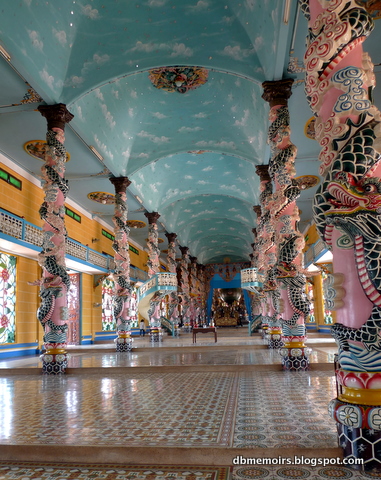 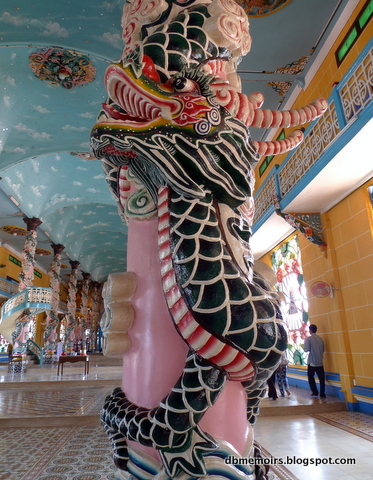 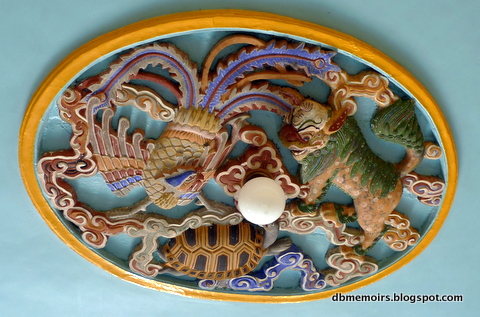 No-one spoke English, and so it took fifteen minutes for me to analyse and interpret all the frowning and hand-shaking whenever I took out my camera. Photography is definitely allowed, as long as you don't step in the holy area in the middle of the building, between the dragon pillars. And you mustn't use the altar as a backdrop for souvenir shots of yourselves. (Notice Jesus Christ, Buddha and Confucius over the sphere?) 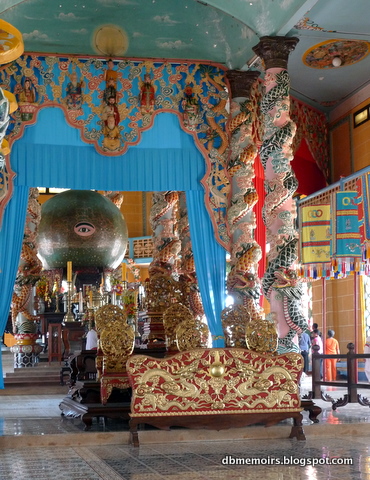 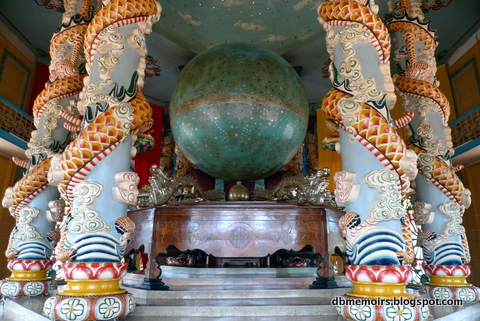 After a while, the Cao Dai followers started pouring in. They had arrived from all over Vietnam for the noontime service. One of them took me by the hand and tried her very best, in broken English, to explain to me the meanings of all the symbols. (At first, she thought I was a fellow worshipper from out of town and spoke to me in Vietnamese.) 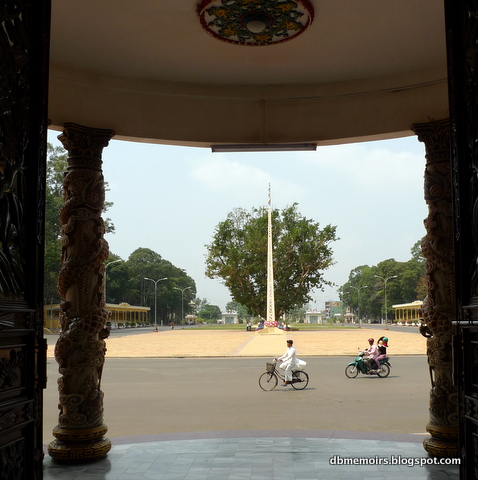 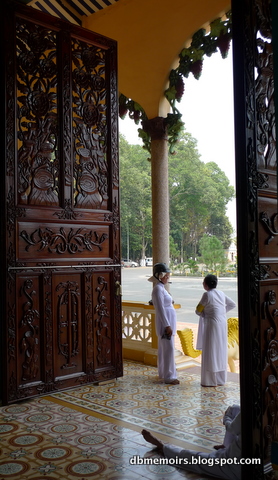 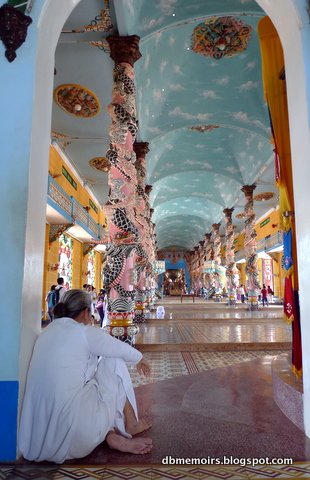 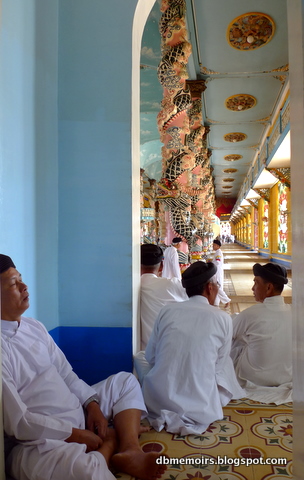 We went up to the second floor where the orchestra was warming up. Tourists streamed into the narrow balconies along the sides of the temple. Being that close to the ceiling with the blue sky and puffy white clouds painted on it felt a little surreal. And then the ceremony started. 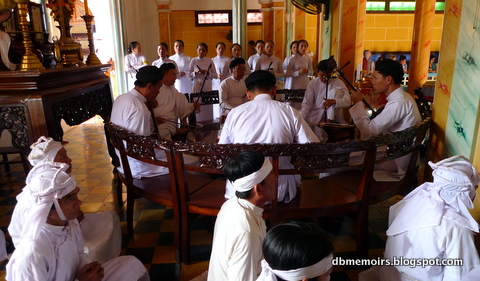 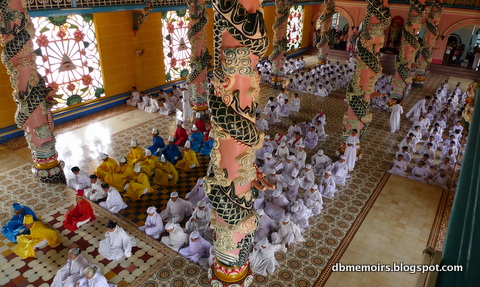 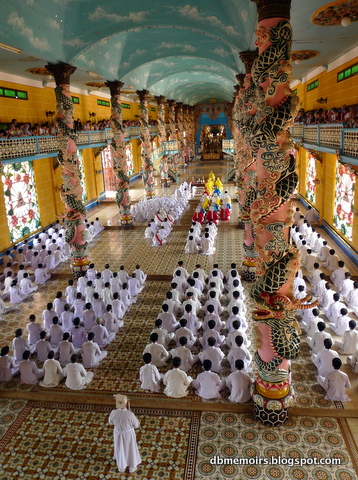 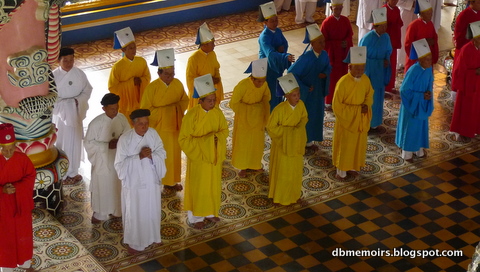 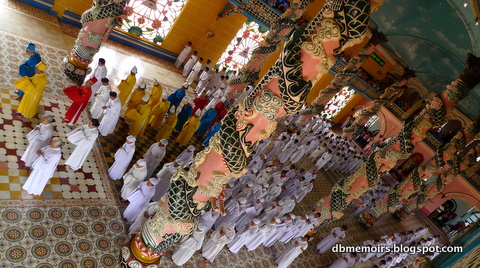 We had to leave before the service ended. It got pretty crowded, and Bunny Rabbit had words with a German backpacker with a brand new DSLR who was shoving his way to the front. Who actually tripped and FELL into the orchestra, but who continued to emote "taking pictures" while falling to his knees.

Bunny Rabbit: Hey, stop that. You're disturbing the service.

Backpacker: What do you care? You're not from here.

Bunny Rabbit: Yes, I am.

Backpacker (after a pause): Oh yeah? You're speaking English.