Now that I've blogged about our Trois Gourmands experience (part 1 and part 2), I can't help but compare it with Aubergine. This dinner also took months to plan. It all started when Steph (silent H) and Cookie Monster were invited to someone's birthday party at Aubergine. That's when they discovered the joys of a perfectly pan-seared foie gras. As you know, sharing is caring, so they immediately set out to recreate that meal with us on 7 April 2011 at 8PM. 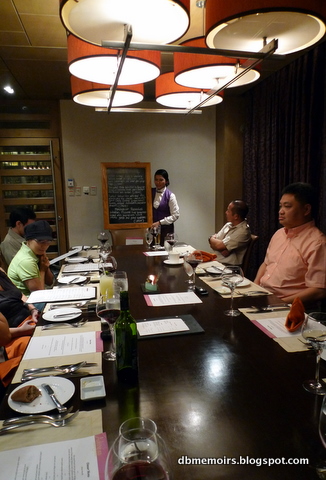 Steph wanted a private room, which meant getting a group of at least 10 people together. Aubergine had emailed the menu they'd prepared for us weeks in advance, and I was already dreaming of the food. Some people did not arrive until almost 9PM, though, and we couldn't start without them. Shockingly, Bry the Incredible Shrinking Man was on time. (Happy birthday, Bry!)

Thank gad their bread basket was nice. But by the time we officially started dinner, we were already more than half-full from the bread.


At long last, at 9:07PM, we were served something else besides bread. I immediately popped the amuse bouche into my mouth. Anything deep fried dipped in mayo is always good. Our server said it was sea bass. I sure hope it wasn't CHILEAN sea bass, which is on the verge of extinction, but which restaurants here in the Philippines still insist on including in their menus. (Read more about the plight of the Patagonian toothfish here.)


Check out the electric pepper grinder. It simultaneously grinds your pepper and shines a light on your food at the push of a button. This would undoubtedly be useful in fighting off a mugger-- make him sneeze and blind him with the light at the same time.


It's true. The foie gras was really to die for-- perfect texture and flavor. I would go back to Aubergine for this. The other things on the plate were quite enjoyable, too, especially the beef carpaccio sprinkled with shaved black truffle and microgreens. Now that I think about it, this course was the highlight of the entire meal for me.

The soup, scallop, and palate cleanser were just OK. It was already 10PM, I expected to be digging into dessert already by that time, I knew that we still had the main course to go, and the bread weighed heavily in my gut. Honestly, I wouldn't have minded skipping those next three courses.


For our mains, we had to choose either meat or fish. The beef tenderloin was truly tender, but the veal cheek was definitely on a higher plane in terms of quality and character. When it concerns beef or pork, give me the nasty bits anytime. Just don't tell my doctor.

The halibut was a revelation. I liked it a lot, and I didn't feel shortchanged that it was the same price as the meat entreé. It was crusty on the outside, moist but flaky inside, and very fresh and flavorful. Much better than Chilean sea bass. And the prawn was lovely, as well as the risotto and veggies. And the colors were fabulous. I could eat that dish everyday.


The dessert looked beautiful-- Aubergine is a patisserie, too, after all-- but to tell you the truth, I just couldn't push anything down my gullet anymore. I just wanted a cup of peppermint tea to settle my stomach. Here's an idea: We should go back to Aubergine just for dessert, why not?


Three people in our group ordered a la carte instead of the set. That meant that they just sat around and watched us eat until all the mains were brought out at 10:20PM. I declined offers to taste, as I was seriously and properly STUFFED, but the dishes looked delicious and the portions were generous.


Steph ordered an additional dessert, which we couldn't finish.


Verdict: Aubergine used to be in the Miele Guide's Top 20 Restaurants in Asia. They got bumped off the list this year, I'm not sure why. But from what I experienced, I wouldn't be surprised if it fights its way back next year. Their food is solid. The service is impeccable. The ambience, I wouldn't mind paying extra for it. Aubergine is where you take someone when you want to make them feel special. One of the five best restaurants that I've ever been to.

Our set menu at Augbergine cost PHP2,500 (US$58) per head. Pretty good value... until I compare it head-to-head with Trois Gourmands. Hmm, is the cost of eating out in Manila HIGHER now versus other Asian countries who are in the Miele Guide? Must travel and eat more to find out, jeje.