Three months before our trip to Davao for the Kadayawan Festival, I started my research. Let me tell you, there's not a lot of "user" information on what to do and where to go in Davao City. There are some well-designed websites about Davao, but the content is too basic and not very helpful. The travel forums are virtually empty. It feels a bit like the locals don't want to toot their horns. Why the secrecy?

Anyway, I found out that there's whitewater rafting in Davao, so I got in touch with Atoy of Davao Wildwater Adventure. They needed a group of five to go, but at that time, no-one had signed up yet. Early in August, I emailed Atoy again and we confirmed our booking for 20 August 2010.

We showed up at the Crocodile Park at 7AM as instructed. We had to wait TWO HOURS for anything to happen. I don't know who or what we were waiting for. That's my only gripe. Not a morning person, you know.


From the Crocodile Park, it took an hour to get to the "put-in", the portion of the Davao River where the trip officially begins. There, we were taught how to don the helmet and vest, how to paddle and what to do when you fall out of the raft.


The plan was to paddle a 13-kilometer stretch of the Davao River. It wasn't adrenaline-pumping rapids all the way. There were many places where the water was calm and we could enjoy the scenery.


At first, it was kind of scary (especially after watching the briefing video where the boats kept tipping over), but after a while, we started looking forward to hitting the rapids. 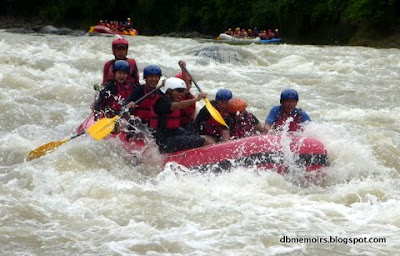 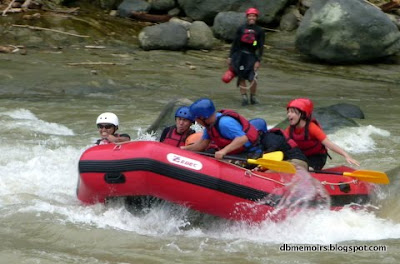 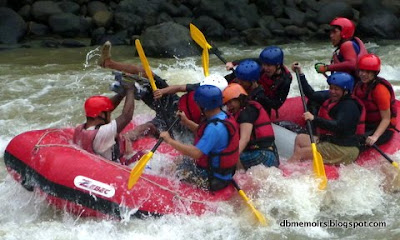 Although two of us fell into the river, our raft never capsized, unlike the one behind us.


There were a bunch of kayaks following us. I realised that they were actually our photographers.

After approximately four hours on the river, we were tired but happy, and ready to call it a day.


We paid Davao Wildwater Adventure PHP2,000 (US$48) each. That included rental of the equipment, services of a river guide, a packed lunch and some drinks, transport to and from the river, a souvenir T-shirt, and best of all-- pictures and videos. They knew exactly where to position themselves to get the best shots. You don't have to bring your own camera.


Note: All photos courtesy of Davao Wildwater Adventure. Thanks for everything, Atoy, Lloyd and all the guys.
Posted by Unknown at 1:19 PM
Email ThisBlogThis!Share to TwitterShare to FacebookShare to Pinterest
Labels: davao, mindanao, travel