luck be a lady

I won the 6/55 Grand Lotto last night, just like Marketman. 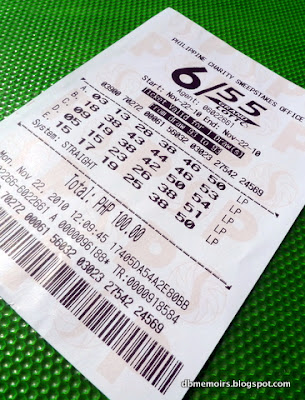 Isn't luck strange? We were watching TV, we saw that the jackpot had ballooned to a staggering amount, and we decided to bet for the first time ever. At that point, I didn't even know how much a bet cost. I thought one bet would be fine, but at the last minute, I got five. And it was the fifth combination that won!

And look at the fourth one (letter D), four numbers are one off the winning numbers. Isn't that weird?

Not really related to this topic, but I suddenly thought of The Secret by Rhonda Byrne. (No, I did NOT "secret" the lotto, although the whole day I felt confident that I would win something. Really.) My problem with The Secret is that if you get your wish, it's because of The Secret. But if you don't, it's because you let negative thoughts enter your mind and that prevented The Secret from working.

Anyway, I've been feeling pretty lucky lately. I think it started with our Mooncake Dice Game in September, when I won the first prize with my very first throw. 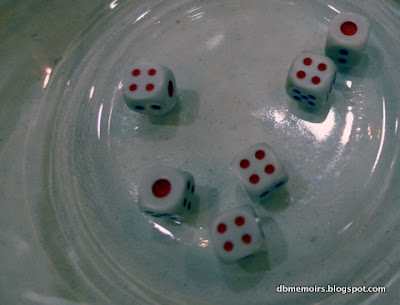 No one won the jackpot last night, so the grand prize is expected to go up to PHP620 million. The odds are one in 29 million-- seemingly insurmountable.

But the odds for winning PHP2,000 are one in 23,000. That's not too bad. So yez, I will be betting again tomorrow. After all, as the English-American writer Helen Rowland said: "You will never win if you never begin."
Posted by Unknown at 10:49 AM
Email ThisBlogThis!Share to TwitterShare to FacebookShare to Pinterest
Labels: current events, feel good