Oh, no. The world is about to end and I've only averaged about half a book every week this year. 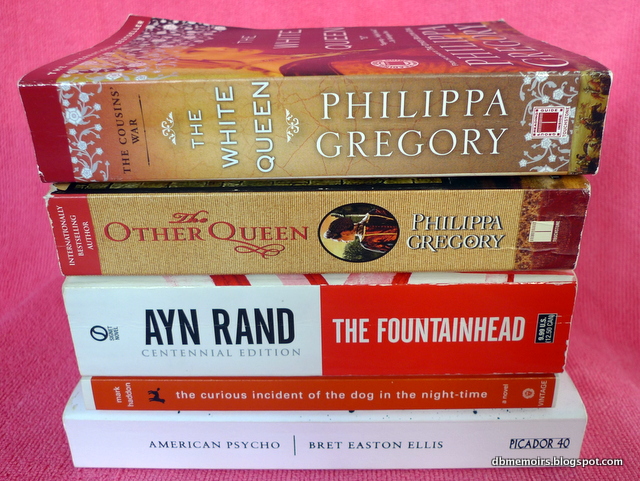 1 & 2. Ah, Philippa Gregory. My guilty pleasure. Some women like trashy novels with Fabio clones on the cover; I like raunchy historical semi-fiction about British royalty. With The White Queen and The Other Queen, I have consumed almost all of Gregory's books about the Plantagenets and the Tudors. Does anyone know where I can get my hands on The Virgin's Lover and The Kingmaker's Daughter? I suppose I could say that I like Gregory because she portrays strong women who have shaped the history of the world, but the truth is her novels are easy and engaging, and I can zone out for hours while reading them.

3. I blush to admit that I have never read any of Ayn Rand's books before. There is no excuse; my parents had a copy of Atlas Shrugged languishing on our bookshelf since I was a child. (Now that I'm looking for it, it has disappeared.) Granted, Rand is not exactly appropriate reading material for tender young minds, but I wish that I had discovered objectivism sooner. I don't quite agree with the necessity of The Fountainhead's brutal rape scene and I can't stand the supposed heroine Dominique Francon, but as a treatise on philosophy and architecture, this book makes it to my list of most important must-reads.

4. I had been wanting to read The Curious Incident Of The Dog In the Night-Time by Mark Haddon forever, but in general I hesitate to buy thin books. It's not a matter of price. It's mostly the impression that a thicker book or a longer story is imperative to flesh out characters. Well, in my old age I seem to have forgotten The Little Prince and Jonathan Livingston Seagull! I don't know any autistic individuals personally and I'm not really interested in autism as a topic, sorry, but I was very impressed by Haddon's novel. No bullshit, no hysterics, no fairy-tale ending. Just a straight-up detective story, at times coldly detached and logical but never unsympathetic, whose protagonist happens to be autistic. It's not that much of a stretch: Sherlock Holmes has often been described as a sociopath.

5. Finally, American Psycho. What can I say? Bret Easton Ellis is mad, scary and brilliant. His fans insist that this book is a satire and should not be taken seriously, but one can't help but wonder, what kind of person could write something so vividly depraved? By the end of the book, the lovable serial killer, Patrick Bateman, is still running amuck in Manhattan and shows no signs of slowing down his spree. I became so desensitized to the violence and gore that I found myself actually rooting for him. American Psycho makes you look inward and face your dark side, which is Bret Easton Ellis's particular genius. I'm still not sure if I actually like the book, but I could not put it down. I can't wait to watch the movie, starring Christian Bale who is admittedly the most psycho version of Batman ever.
Posted by Unknown at 12:04 PM
Email ThisBlogThis!Share to TwitterShare to FacebookShare to Pinterest
Labels: books, movies