a dinner for charity

Warning: This is a bit of a whingy blog post. If you're not in the mood for snark, you should probably wait for "the season to be jolly" to pass before reading it.

I remember when I first heard of Pinoy Eats World Guerilla Dinners. The blogger jinlovestoeat went last year and the way she described it, it seemed right up my alley. So when my friends told me that a dinner was being organized this December and it miraculously fit my schedule, I said OK right away.

Sad to say, there were a few disappointments.

First disappointment: Usually, you're given an address for the meeting place but it's not where the dinner is to be held, resulting in a sense of mystery and excitement because you don't know where you're going. Lo and behold, our group's meeting and dining spots were one and the same. Oh, there was a corny gag where we were led from the house's garage to its front door, but the short walk served no purpose, really, other than to highlight the fact that it was a very big house.

I wanted our venue to be more special, maybe outdoors under the stars or in a penthouse with a fantastic view. Instead, we got meh-- no offense to the homeowner.

Second: I was expecting just a few diners, like jinlovestoeat's batch who all fit in one long table. I thought that it would be an intimate affair where we would get to meet new people and learn stuff about Filipino and/or world cuisine. Nope. There were, if I recall correctly, at least five round tables and each group stuck to its own. The ambiance did not encourage mingling.

Third: I thought that since we were going to be a small company, we would be sharing our food family-style with beautiful platters laid out in the middle of the table. Instead, we were presented with... a buffet. I guess it was the most efficient way of serving 50 people or so, but unfortunately, there's just no way to make a buffet spread look appetizing, which is why I never take photos of any.

Also, how can anyone have a decent conversation when you're queuing up for food half the time?

Fourth: This dinner was way too expensive. More about that later. 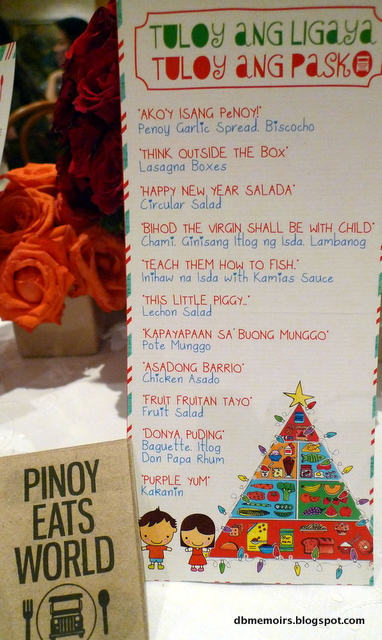 Most of the dishes were pretty decent, actually. The egg salad (made with balut penoy!) on toast was nicely comforting, although I felt that the spread needed more salt to offset the sweetness of the bread. 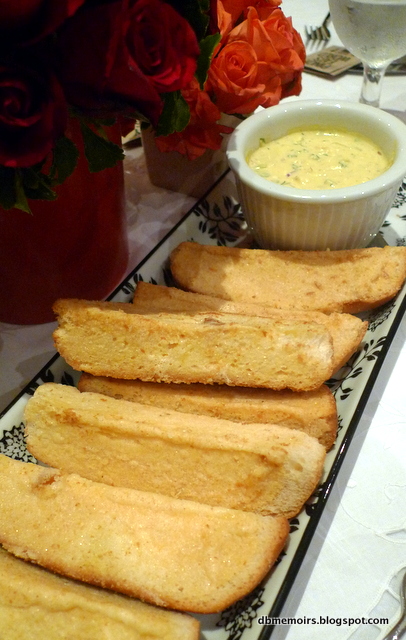 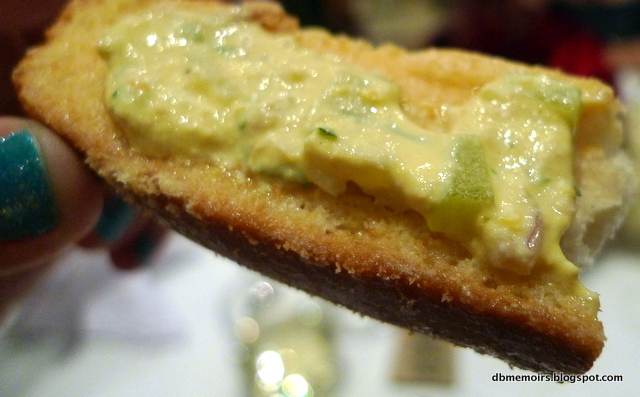 The "circular salad" with beet, radish and eggplant was a joy to eat. I especially liked the tiny shrimps and onion hair on top. Very creative, and the medley of flavors was superb. 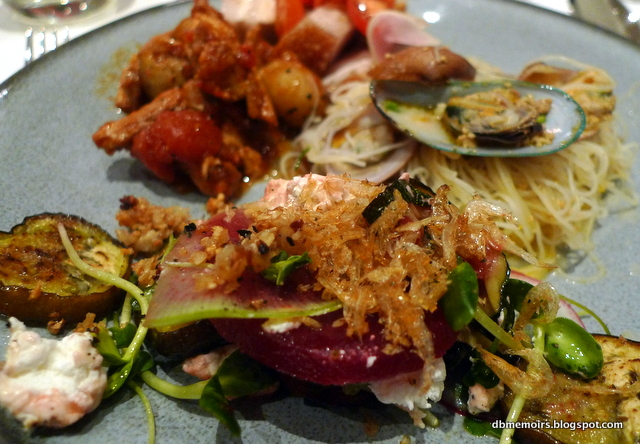 The chicken asado with marble potatoes was too aggressively flavored for some of my seatmates, but I thought that it was quite lovely with white rice. 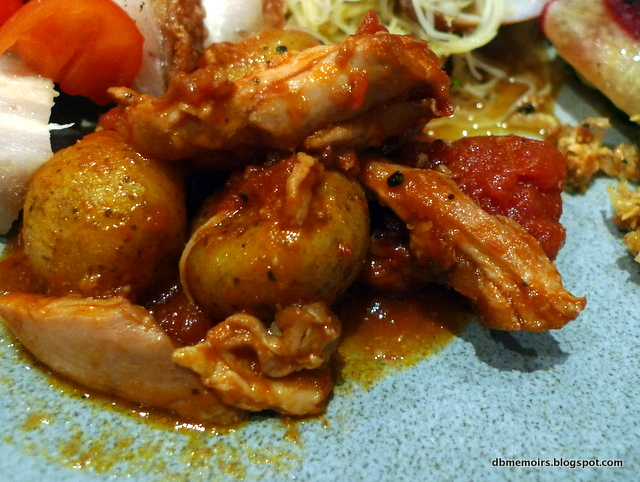 "This Little Piggy..." had a cute name, but whichever way I looked at it, it was just ordinary deep-fried pork belly. To spoon some cherry tomatoes over it and call it a salad, bah humbug! 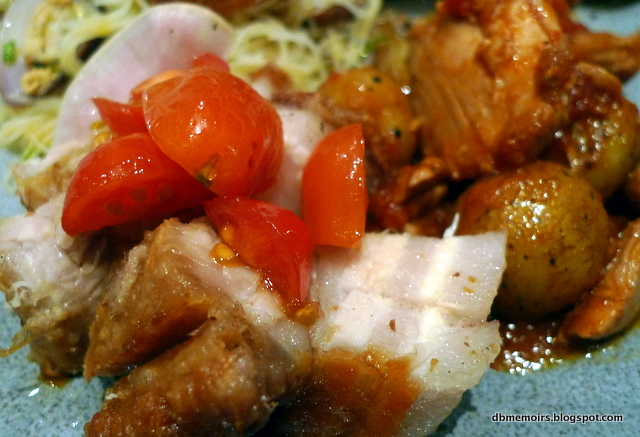 The star of the evening was the noodle dish with shellfish, local caviar and lambanog (coconut wine) sauce. Wonderful, brilliant flavors. And the seafood was perfectly cooked. I would have eaten more of it, but I still had a ways to go before dessert. 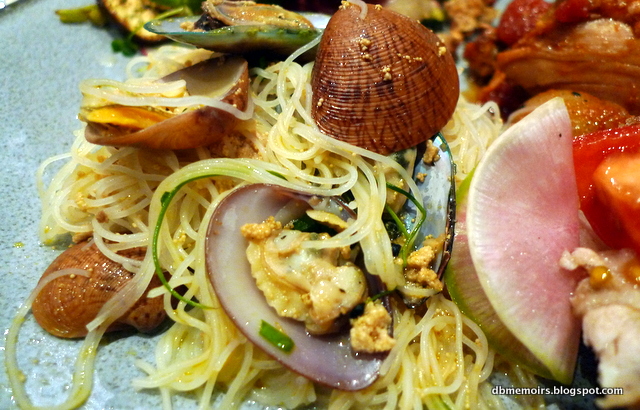 The mung bean stew barely had any mung beans. I must say that it was my fifth disappointment of the evening. I happen to like a hearty ginisang munggo and I can't stand it when it's tweaked beyond recognition. 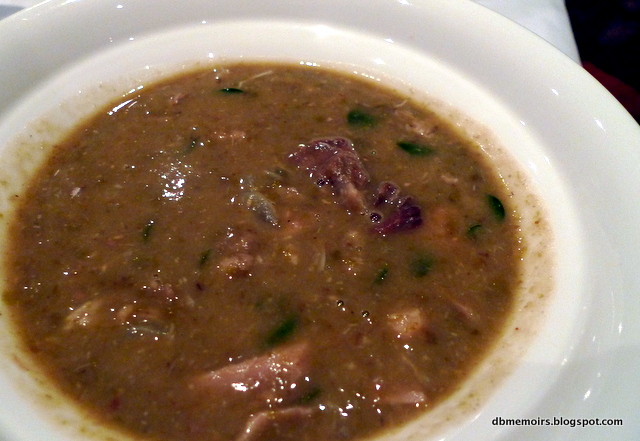 The lasagna box was boring and unnecessary. 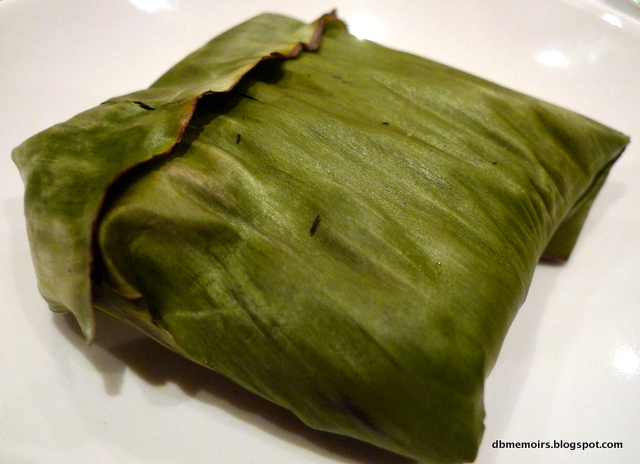 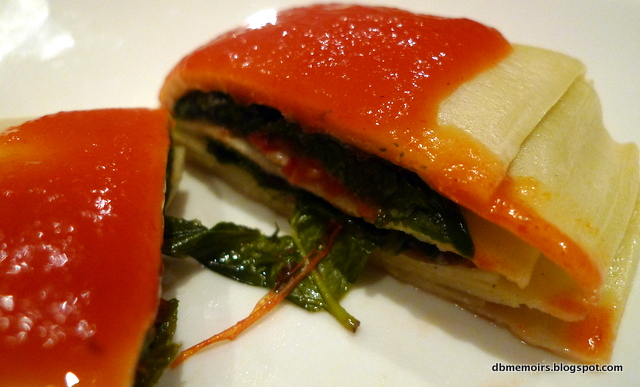 At 2500 pesos (about US$61) per head, I thought that we would have some beef or lamb or something premium, but our main dish was fish. Fish! OK, the kamias (a sour fruit that looks like a pale, miniature gherkin) vinaigrette was inspired, but for the price we paid, didn't we deserve more than the cheapest possible ingredients? Scroll back up and I'm sure you'll agree. 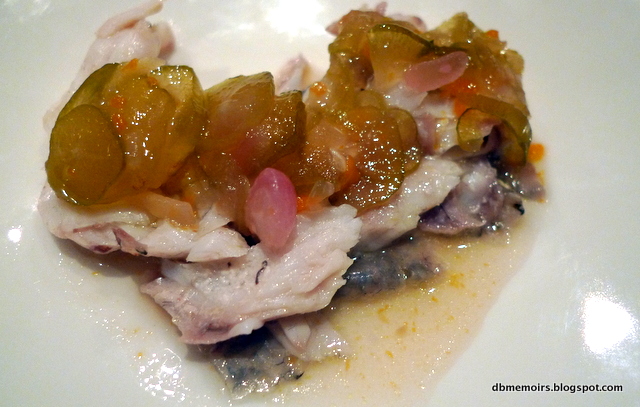 Dessert was fine. I missed the fruit salad completely, but the bite-sized purple sapin-sapin (glutinous rice thingies) and the bread pudding were not bad.

We also had some ensaymada rolls and ensaymada-flavored ice cream which would have been completely delightful if the other desserts were less floury and carb-y. But get this! They weren't even part of our 2500 peso dinner. They were homemade by a couple of generous guests and served to us gratis. 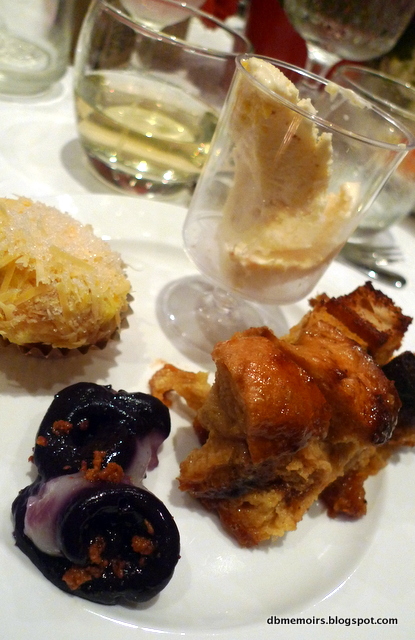 That's well and good, but I joined that dinner on 12 December 2012 to eat good food and to have a memorable and unique experience. If I wanted to be charitable, I could very easily have just spent my 2500 pesos on veal cheeks and foie gras at Aubergine, and still have no problems dropping an additional 1000 pesos on a random charitable cause recommended to me by any stranger on the street.

It would have been so much better if the organizers had gone all-out and sold a hundred or more seats. Maybe then we could have had turkey!