how to get to camiguin

Last November, two local airlines declared a seat sale. I just couldn't resist the rock-bottom prices and bought a whole bunch of plane tickets. That's how I ended up going to Cagayan de Oro in June for only 1,300 pesos round trip from Manila.

But Cagayan de Oro was not the objective. It just so happens that Lumbia Airport in CDO is the closest airport to the island province of Camiguin, a place I last visited in the early 1990s.

We arrived at Lumbia around 830AM, too late to catch the Ocean Jet ferry at the CDO pier which, um, jets to Camiguin only once a day. The alternative is to take the bus to Balingoan port where the RORO (roll on, roll off) ferries are scheduled every hour throughout the day.

From the airport, it was about 50 minutes by taxi to Agora Bus Terminal in the city. We paid the driver 200 pesos for two people, which is what we agreed on when we got into the cab. He let the meter run and it read PHP197.50 at the end of the ride, so it wasn't a bad deal at all.

After a quick and cheap breakfast outside the terminal, we paid the 2 peso "usage fee" to enter and luckily an air-conditioned bus was just about to leave. The bus fare was PHP128 and it took us a slightly grueling 2.5 hours to get from Agora to Balingoan. 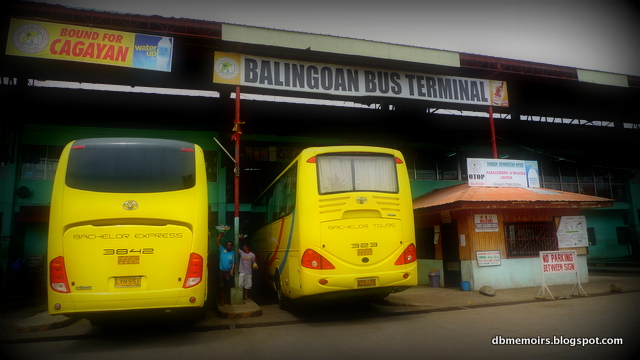 When we alighted from the bus, it was lunchtime. There were a couple of clean-looking eateries right across from where the buses were parked. We had a very tasty meal at Agnus Lechon Baboy for only 60 pesos per head. So cheap, and they had an impressive array of pre-cooked dishes. There wasn't any lechon, though. 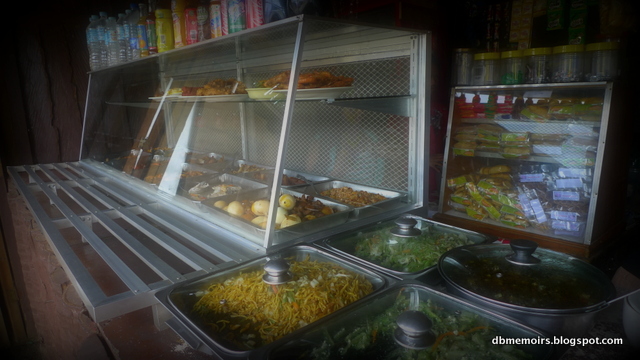 It was a 15-second tricycle ride to the pier which was literally behind the bus terminal building. We had to queue up and pay three times. The RORO fare was PHP170, environmental fee PHP2 and terminal fee PHP2.50. It's frustratingly the same all over the Philippines: we're not very big on coordination. OK, there wasn't really a queue since it was lean season and there were only a handful of passengers, but you know what I mean.

It was a bit cold and windy during the crossing from Balingoan in the maniland to Benoni in Camiguin, but it wasn't not too choppy. I even fell asleep during the 1.5 hour voyage. I woke up in time to witness a pod of dolphins cavorting alongside our vessel.

The first things I noticed as we were approaching Benoni Pier were the awesome volcanoes. Camiguin has five of them within a land area of only 238 square kilometers. 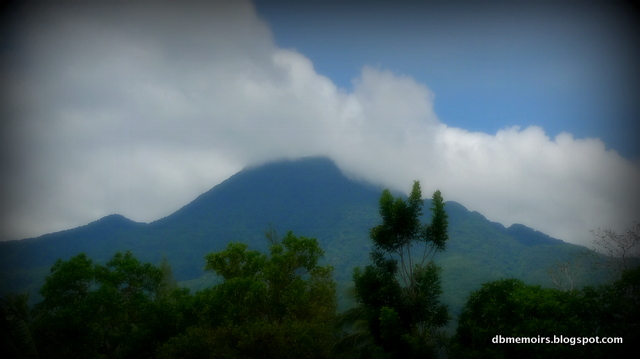 At the pier parking lot, we hired a multicab to take us to Enigmata Treehouse Ecolodge which Wikireena recommended for "being one with nature". During the scenic half-hour drive, we saw some pretty well-preserved old buildings. 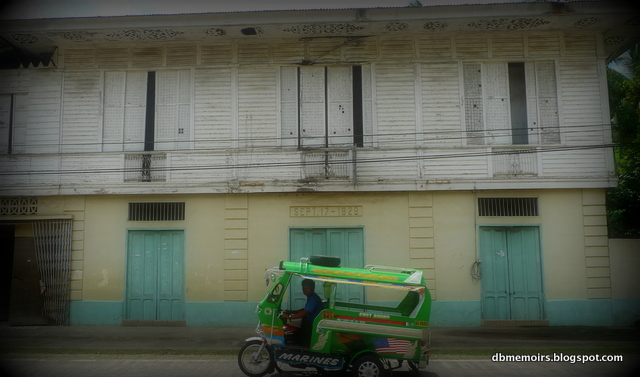 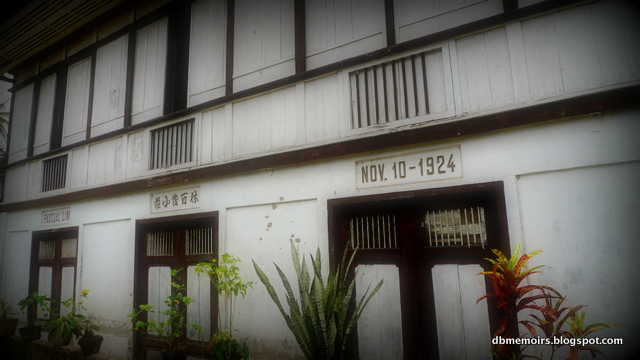 Enigmata was... let's just say, quaint and cozy in its own way. Nice artwork all around. The treehouse swayed in the wind, like a cradle. Unfortunately, the whole place looked kinda run down and it was too far from everything. The clincher was the bathroom. I don't mind rustic, but I draw the line at bathrooms. 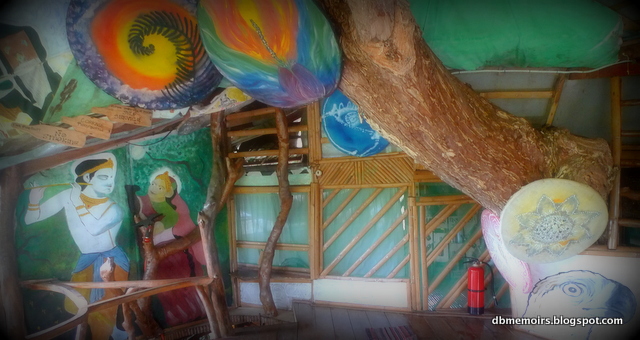 I guess when I heard "treehouse", I was expecting something more dramatic. Like Harads Tree Hotel in Sweden. Preferably with a decent bathroom.


We drove around to check out some other places. Ultimately we ended up at Pabua's Cottages in the capital town of Mambajao. I'd already read some good things about it prior to our trip and truthfully, it was my first choice anyway. So we thanked the driver for his assistance, paid him PHP450 and checked in. Finally, after traveling for practically the whole day.

Pabua's regular AC room with private bath for two people was 700 pesos a night, but we decided to splurge and got the family cottage near the entrance for the special discounted rate of PHP1,000 because it was off-peak. 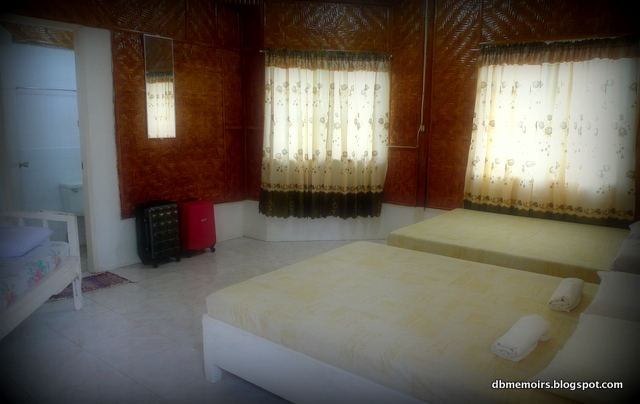 The best thing about our cottage was the private veranda facing the street. Great for watching the world go by while having a cup of coffee. 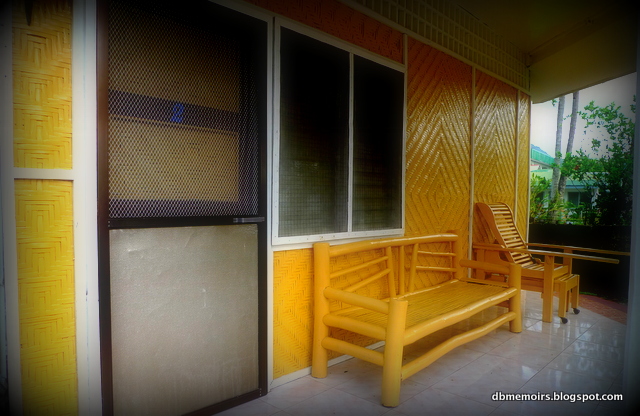 After a refreshing shower with free-flowing spring water which made my hair and skin feel smooth as silk (woohoo!), I checked my email with the free wi-fi and had a recharging catnap. It was time to eat again. I didn't feel like exploring anymore, so we just crossed the road to Paras Beach Resort for a quiet dinner by the breakwater. 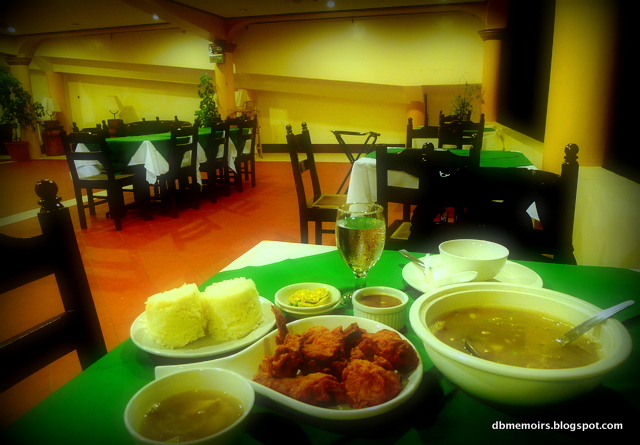 The food was nothing spectacular, but it was served fresh, hot and fast. Reasonably priced too-- we spent 200 pesos each-- considering that Paras is a relatively high-end resort. Our waiter was really efficient and had an old-fashioned flair about him.

It was a satisfying meal and a fitting end to our first day in Camiguin.