My father said to me, "I don't understand you. You come to Hong Kong to eat Japanese food?"

OK, let me explain. Nobu is one of The Miele Guide's Asia's Top 20 Restaurants. I kind of trust this guide because I have already tried and enjoyed two in the Top 20-- Antonio's and Tippling Point. (Previously in The Miele Guide, Aubergine, though excellent, doesn't count because it's not on the 2010/2011 list.) Hong Kong has six restaurants on the list, while Singapore and Japan have only six COMBINED.

I felt like I was being challenged to go to as many Top 20 restaurants as I could... although I'm not exactly sure who was challenging me, or why. I just knew that this trip with the parents provided an opportunity to tick some/a few/several off the list, and I had to grab it.

Nobu was our first meal upon landing on 14 August 2011. I reserved the table a week before we arrived. I wanted someplace not too far from our hotel, Gateway Marco Polo at Harbour City. The InterContinental Hong Kong, which incidentally houses not just Nobu, but also Spoon by Alain Ducasse, was pretty close. And it was a Sunday, and they had a cheap reasonably-priced Sunday lunch set.

Ma and I ordered two sets, which our waiter said was enough food for three people, and he was right. He's a pretty bad salesman, but at least he was honest.

Each of us could choose four appetizers, but since there were only eight choices, we got to try them all. Yay!

The scallop and the taco were nicely done, but the truth is I don't remember how they tasted now. The salmon, on the other hand, stands out in my memory as very very fresh and that dollop of caviar was the most simple, perfect adornment. Very clean-tasting and invigorating.

The shrimps and uni, at first, were weird. Like the Salmon Tartar, the seafood was almost perversely lively and the colors were blinding, but chewing the dish made me feel a bit uneasy. Now I know why-- the shrimp was slimy. I had never eaten ebi sashimi so fresh that it was somewhat gooey. The sweetness of the whole composition of shrimp, sea urchin and tomato lingered on the tongue.

Each tiny dish, the size of my palm, held a perfect little jewel. They looked fabulous. They're some of the prettiest food I've ever taken pictures of.

The beef was delicously tender and smoky. The crispy rice was horribly tasteless and disappointing. The toro and kanpachi were fine, but not as brilliant as the salmon and the diabolical Botan Ebi & Uni Sashimi "New Style". (Whatever that new style is, it sure is memorable.)

We had a main dish each. Of course, we had to choose beef, which we choose out of habit because it's everybody's impression that beef is the most expensive and value for money protein-- is this still true nowadays?

And black cod is the most expensive and value for money fish. It's gindara, and that's expensive, right?

Both dishes were magnificent. Every component of the two dishes was utter perfection. The texture of the beef was magical, and the flavor was delicate but full-bodied. And the mushrooms and asparagus absorbed that tremendous beefy character while remaining crisp and distinct.

The black cod was ethereal. Oy, words are not enough. The fish flaked flawlessly at the touch of a fork, and the miso glaze tasted like distilled Japan, if you know what I mean. The Black Cod Saikyo Yaki, Chef Nobu Matsuhisa's signature dish, was definitely the best thing we ate that day.

Contrary to our waiter's advice, we ordered a chicken dish for Pop.


I didn't know that there were "Nobu Lunch Dishes" on the menu, served with salad, miso soup, rice and oshinko (pickles). I was impressed with the miso soup, which was worlds apart from the commercial over-salted ones I've had the misfortune of tasting. And the chicken, to put it simply, was the yummiest incarnation of yakitori I've ever had.

Things started to go downhill after that, unfortunately. We were all full now, and would have happily concluded our meal, but Ma and I still had a "Rice or Noodle" option to go. I chose the sushi because Nobu IS a Japanese restaurant, after all. Ma picked the cold soba and passed it on to Pop.

The Sushi Assortment was OK, with the Botan Shrimp playing center stage again for me. The noodle dish looked beautiful, but I just couldn't bring myself to take another bite... until dessert came. I always have space for dessert, dammit.

For the last course of our two Sunday lunch sets, we got chocolate (when in doubt, or if there are too many choices, chocolate is usually safe) and the fruit pearls (fruits are healthy daw).

Nobu serves great desserts. How come nobody talks about them? The chocolate cake was absolutely sinful: Light and fluffy, creamy and melty all at the same time. And who knew that matcha ice cream would match it so well?

And those crazy Crystal Fruit Pearls. Forgive the picture. On the second thought, forgive our waiter. He poured goop all over it while explaining sternly not to chew and to just allow the pearls to burst in your mouth. Under that pink slush were four translucent balls of intense fruit essence. My favorite was the mango. It looked just like an egg yolk on my spoon, and together with the shaved ice, felt cool on my tongue. And then it exploded and out spilled the most wonderful mango elixir, flooding my mouth.

Besides location, the other reason I chose Nobu over the other Top 20 restaurants was price. The Sunday lunch set cost HK$400. Not bad for a multi-awarded and world-famous restaurant.

"Well, it wasn't cheap either, " said Pop. I countered with, "But not the most expensive." Which sort of implied that I would have no problems spending much, much more on a single, really good meal-- dinner at Tippling Point in Singapore last year comes to mind-- and that scared Pop a little. 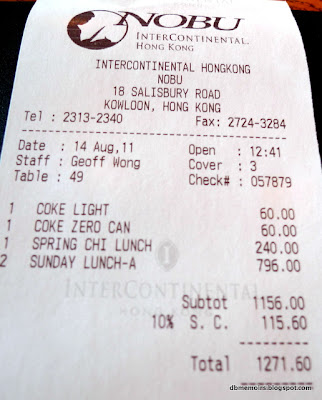 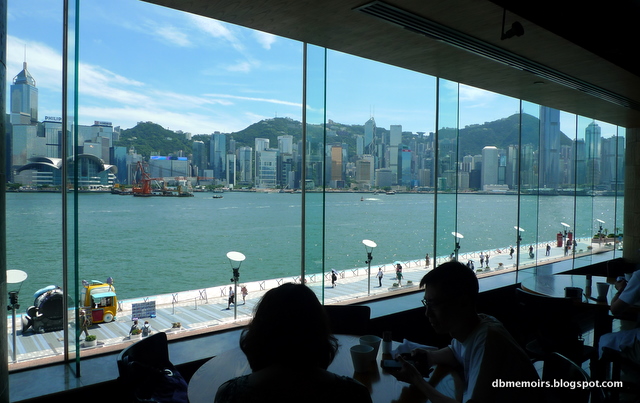 I wonder what those things stuck on the ceiling are. Does anyone know? 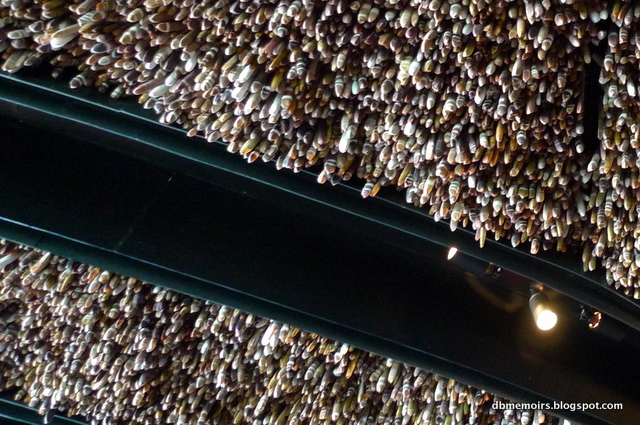 Verdict: Go eat at Nobu HK. It's worth the trip. Not everything on the menu is superlative, but the good stuff is truly, madly good. Like the beef, the Botan shrimp, the amazing fruit pearls, and above all, the black cod.

I was initially attracted to the "Nobu Sunday Set Lunch", and on paper it was irresistible because it looked like Chef Nobu's greatest hits, but there was too much food. Towards the end, we wanted to throw in the towel and that really diminished some of our enjoyment.

Maybe we would have been happier with the regular "Nobu Lunch Dishes" which were complete meals by themselves, and yes, cheaper. The selection is quite nice, too. 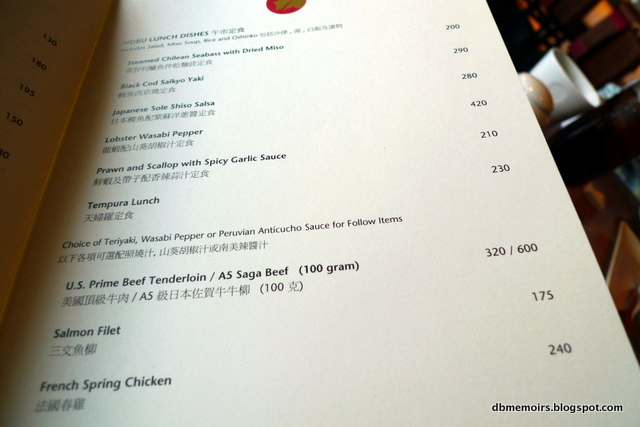 Everything you need to know about Nobu Hong Kong is on their excellent website, here. They accept bookings via email and they reply right away.
Posted by Unknown at 10:02 PM
Email ThisBlogThis!Share to TwitterShare to FacebookShare to Pinterest
Labels: food, hong kong, hotels, kowloon, travel