The next morning, we woke up at 4AM to catch the sunrise at Angkor Wat. Good thing I brought a torch as it was pitch dark when we entered the park. We made our way to the reflecting pool, where a mob of people had already set up their cameras and tripods.

We all waited in (relative) silence; the Taiwanese tourists were chattering away and sharing their packed breakfasts. At 5AM, we started to get some light, but no sun. There was a gray haze hanging over Angkor Wat, and there was hardly any color in the sky. My best picture is this: Finally, we gave up and returned to Ta Som Guesthouse for some bread, eggs and coffee. Our trusty tuktuk driver Sok Cheat said that during the rainy season, the sky is usually clearer and sunrise more colorful, if you don't mind waiting for the rain to stop. Apparently, it can rain non-stop 24/7 for MONTHS at a time.

At 830AM, we set out again. Our destination was Angkor Thom, nicknamed "Big Angkor"-- more than four times larger than the Angkor Wat complex. We entered through the South Gate. The sun had come out by then and cast a fabulous golden glow over everything. 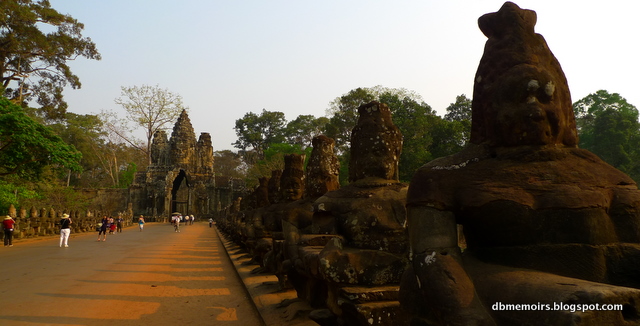 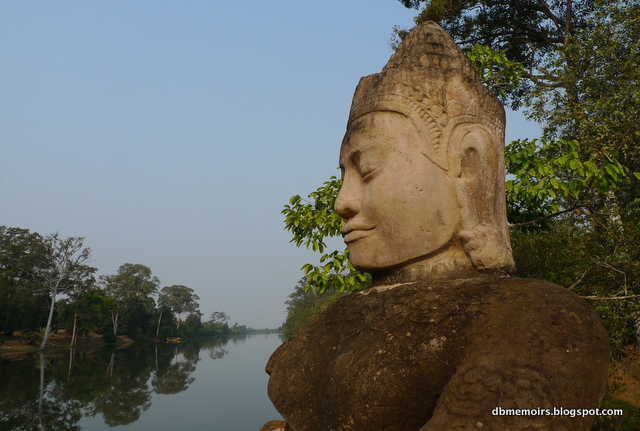 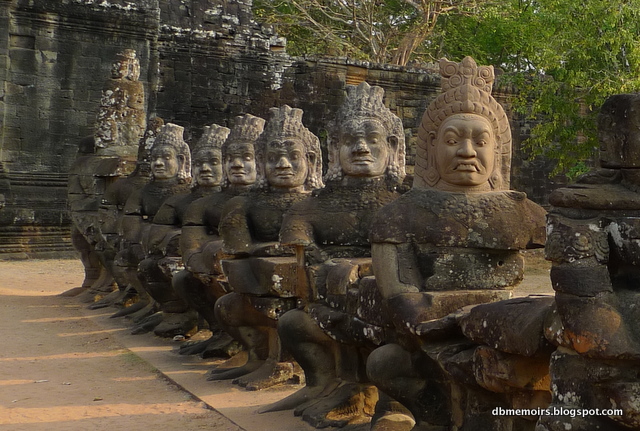 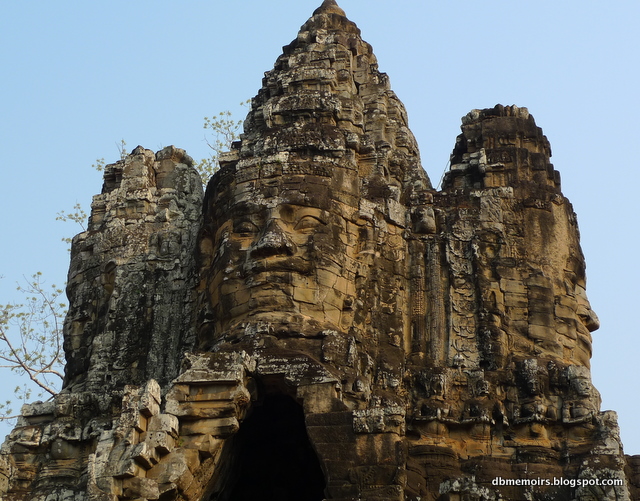 South Gate is one of four entrances to Angkor Thom, and definitely the most popular because it's in the best condition. Most of the statues still had their heads. At this point, we were racing against a motorcade of tour buses filled with hordes of holidaymakers.

Our target was Bayon. If you can only spend one day in Siem Reap, Bayon is right there next to Angkor Wat in the list of must-sees. The giant stone faces were absolutely breathtaking, and even the carvings on the walls were very well-preserved. 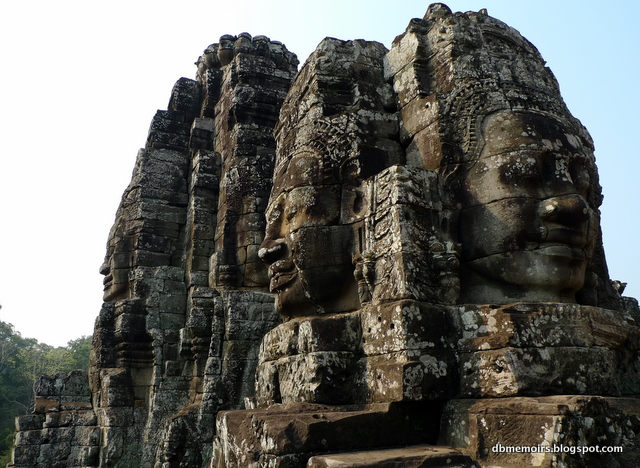 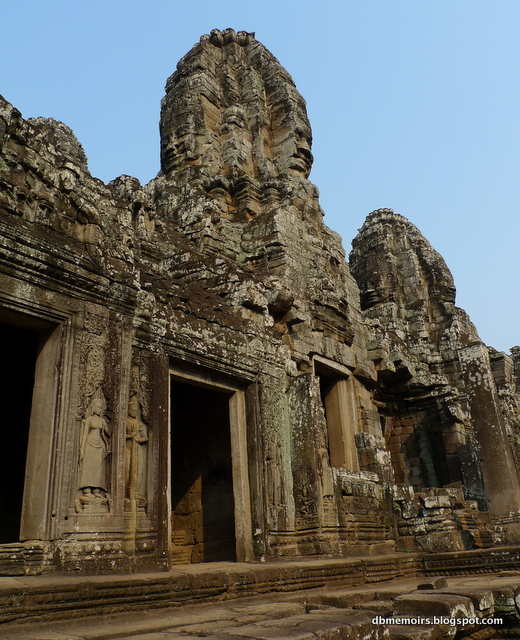 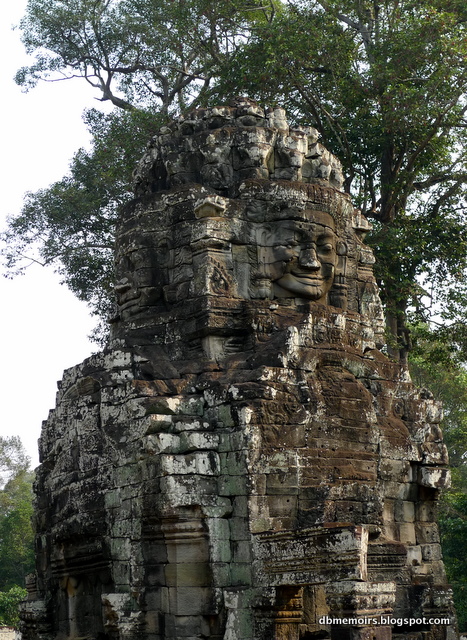 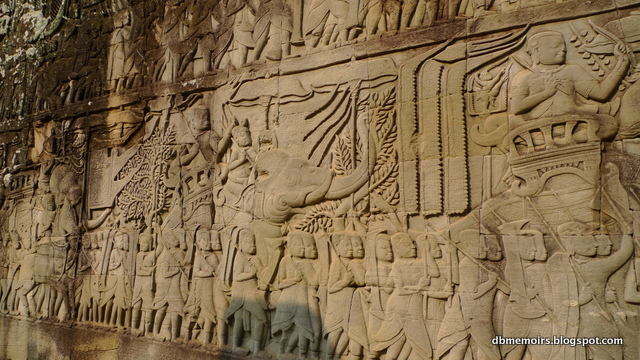 At its peak in the early 12th century, the population of the Khmer Empire centered around Angkor numbered a million souls, and they kept building massive stuff! No wonder the Khmers were subsequently almost wiped out by invaders; they were too exhausted from constructing temples to fight back. 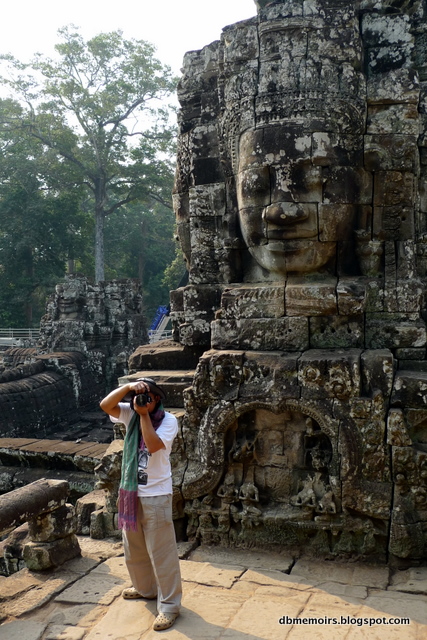 After Bayon, we walked around Angkor Thom and peeked at the other temples, such as the Terrace of the Elephants, Phimeanakas and the Terrace of the Leper King. They're all very important monuments, I'm sure, but we immediately gravitated towards the beautiful enormous ancient trees. Yez, we're kinda eccentric like dut. 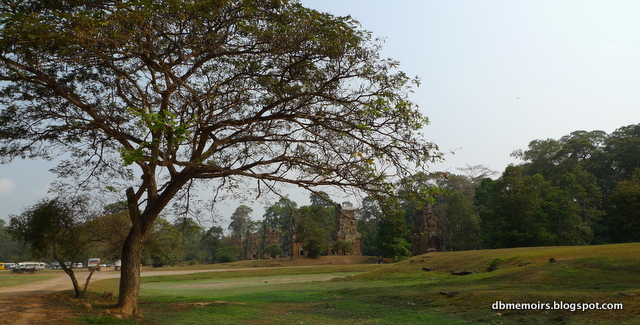 Anyway, here's my favorite photo of Bayon. In Dynamic B&W, of course. 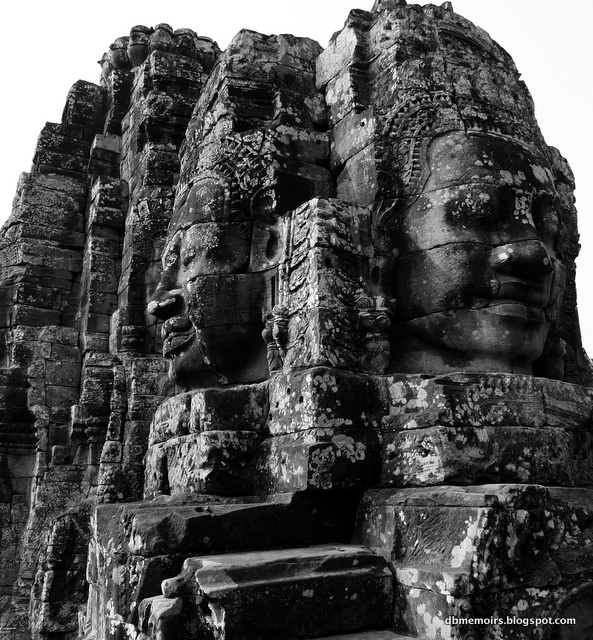