chili crab with a view

During my research, I had read that the best Singaporean chili crab was at No Signboard. I asked the concierge at the Meritus Mandarin to give me directions for the cab driver. He wrote on a piece of paper: "No Signboard @ Esplanade". We showed it to the driver. He said, "Eh, but there is a branch of No Signboard closer to here."

But I'm glad we trusted the concierge, because when we arrived at Esplanade Theatres On The Bay, this is what we saw: 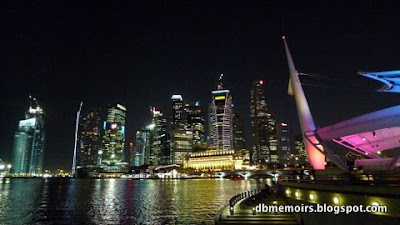 There was a concert at the park. The singer was not very good. What they need is a Filipino band. 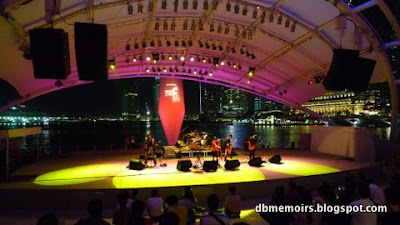 The waiting time at No Signboard was one hour, so I decided to cross the bridge to Merlion Park. Very cool view from the bridge. I didn't bring a tripod, so the pictures are a bit blurry. The LX3 still does the job, though. The low-light lover. 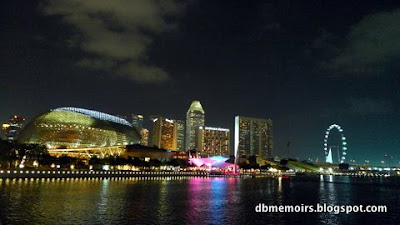 The icon of Singapore-- the Merlion. I wonder who invented it. Let's ask Wiki. 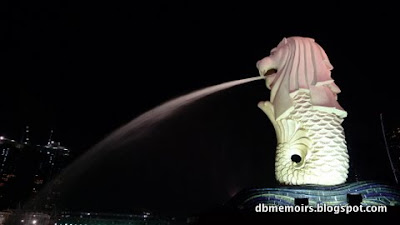 Wikipedia says: "The Merlion is an imaginary creature with the head of a lion and the body of a fish. Its name combines 'mer' meaning the sea and 'lion'. The fish body comes from Singapore's ancient name back when it was a fishing village — Temasek — meaning 'sea town' in Javanese. The lion head represents Singapore's original name — Singapura — meaning 'lion city'. The symbol was designed by Mr. Fabrice Jiew."

The Fullerton Hotel behind the statue is just as famous. 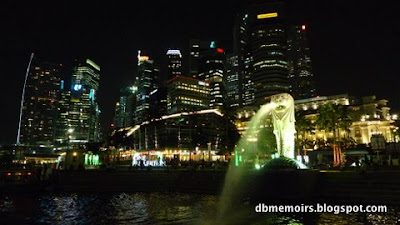 When I got back to the restaurant, our table was ready. I ordered the cereal prawns. Our six pieces actually cost more than the crab, but it was yummy! 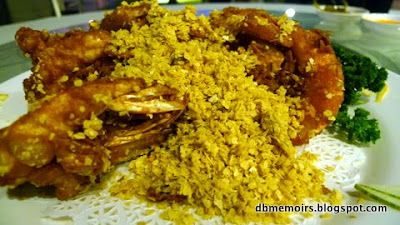 The star of the evening: Singaporean chili crab. Best eaten with tiny pieces of mantou bread to mop up the sauce. I chose the Sri Lankan crab because of the big claws. 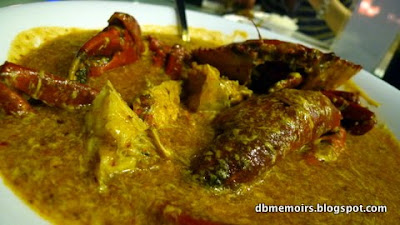 Mom's favorite part of the crab is the roe under the shell, but Pop wouldn't let her eat it because of her high blood pressure. He got up and went to the toilet, so I yelled at Mom to "Eat it! Eat it now!" When she was done, I put the shell back in the bowl and poured some sauce over it. Pop came back. He turned the shell over and said, "Ah, they gave us a male crab."

Verdict: I found out that Singapore's food is not all good. It's not like Bangkok or Hong Kong where ALL the food is excellent. In Singapore, the more expensive it is, the better it is. No Signboard is actually kinda expensive. (How many times have I written 'Singapore is expensive' already?) The prawns were US$39 and the one crab was US$33, but they were both delish. If you can only have chili crab for one meal during your stay, and you want to be sure that you will enjoy it that you don't mind spending more than you ordinarily would, No Signboard @ Esplanade is the place to go.