When I was in Manila last week, my goal was to eat at places that I had not tried before. Armed with a bunch of restaurant reviews, I spent a lot of time walking around the malls, looking for new food.

It's not easy, let me tell you. When your feet hurt and you're hungry, you can be tempted to go for the familiar. But I found a couple of gems in the Trinoma Mall.

I first read about World Chicken on Jenni Epperson's blog. 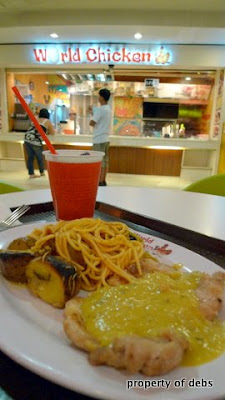 I'd heard about the long lines during lunch and dinner rush, but I went at 2pm so no lines. You get a piece of chicken, then choose your sauce and sidings-- kind of like Kenny Rogers. The chicken was nothing to write home about, although I appreciated the fact that it was boneless. The tarragon gravy was very yummy. It was one of the most untouched sauces, probably because not too many people know what tarragon is.

The baked potatoes were extremely dry-- will avoid next time. But their spaghetti al pomodoro is exquisite! Al dente, not drowning in sauce, savory and spicy but not overpowering.

Verdict: For 180 pesos (about US$3.50) with a glass of root beer, truly value for money. I will definitely go back, if not for the killer spaghetti al pomodoro, then maybe to try the other pasta sidings which also looked excellent.

Next day, I tried Cafe Mary Grace, also in Trinoma. 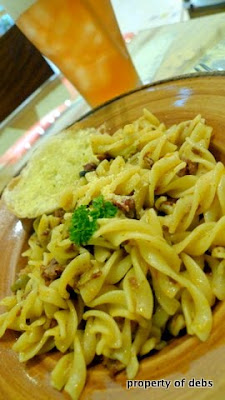 That's fusilli with chorizo and green olive sauce. Really nice. Not too salty, but not sweet either. I like these unusual pasta sauces (not red, not white) which just coat the pasta. A lot of local restaurants tend to pile on the sauce. You can't see the pasta anymore, let alone taste it.

I ordered the Apple Cinnamon iced tea. It's crazy good. It's like drinking a slice of apple pie.

Verdict: I was a little dismayed at first because of the serving size. I guess I got used to ginormous American-style servings which a normal human being can't finish by himself anyway. After I finished my meal, I felt really good. I was full, but not overly so, and no leftovers! Total price of meal: 400 pesos (about US$8). A bit pricey, but I would go back for the lovely service and to try the other stuff on their very extensive menu.
Posted by Unknown at 9:44 AM
Email ThisBlogThis!Share to TwitterShare to FacebookShare to Pinterest
Labels: food, manila