sightseeing in seoul, part one

We were in South Korea from the 15th to the 19th of July 2013, but we only had one full day in Seoul. Most people would probably be able to see everything there is to see in just a few hours (Half-day city tour, anyone?) but that's not how I roll. I like to take my time, to linger and absorb, which means that hardly anybody wants to go anywhere with me, usually. 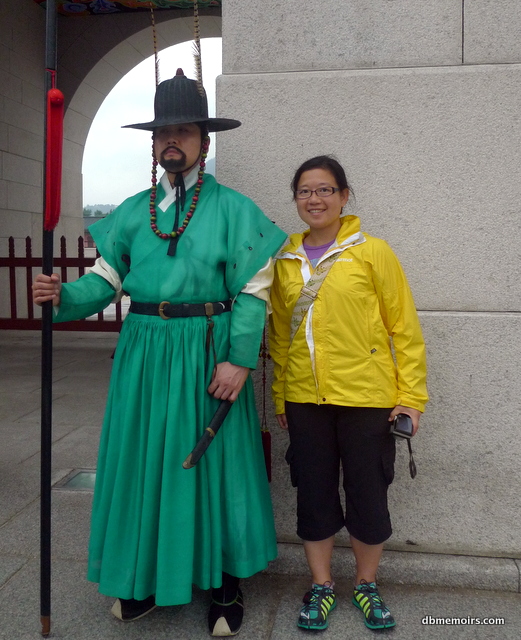 After grabbing a cup of coffee at Starbucks-- the only coffee shop that was open in Myeong-dong at 9AM-- we took the subway to Gwanghwamun station. I was hoping to have brunch right away, but the ajumma at the restaurant that I wanted to try told us to come back later.

So, a bit of sightseeing. First, we paid our respects to King Sejong the Great who created Hangul, the Korean alphabet, and did lots of other great things. 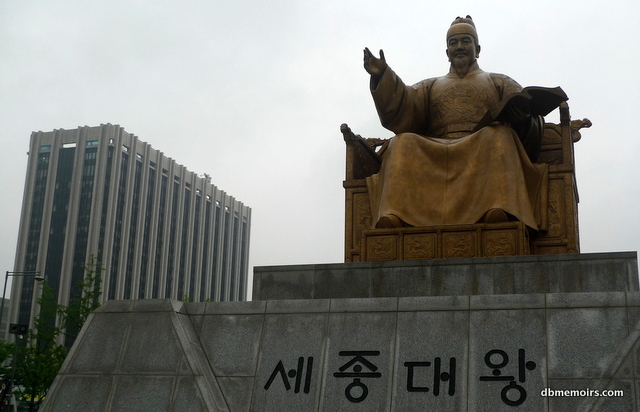 Next, we visited Admiral Yi Sunshin who is beloved by all Koreans because he defeated the Japanese navy. Considering how much animosity there is was between Korean and Japanese, he's regarded as a national hero and all-around good guy. 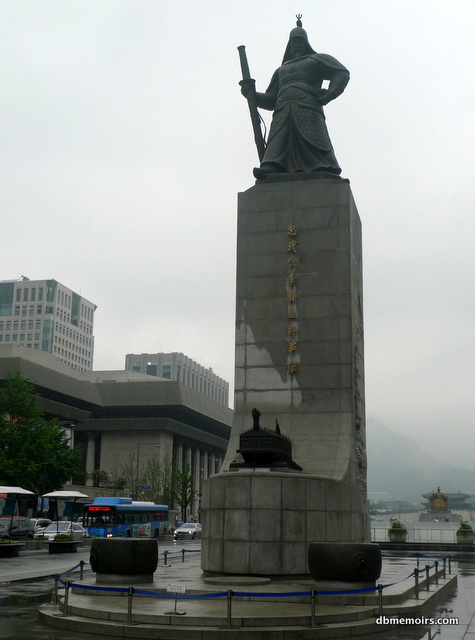 Finally, Goryo Samgyetang Restaurant was open for business at 11AM.

Originally, JetLee and I wanted to share just one order, but our server gave us an extremely stern look which scared the bejesus out of us. We spent 14,000 won (US$13) each for a samgyetang, or "chicken broth with Korean ginseng" as it said on the menu. 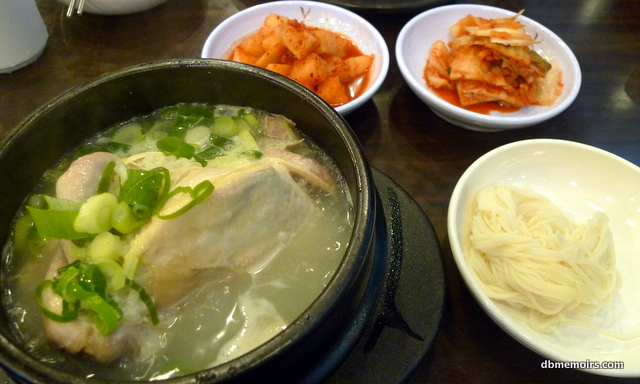 Piping hot, which was a blessing on a miserably rainy day. The chicken was tender and bursting with flavor... and rice, actually. It was stuffed with rice. I couldn't taste the ginseng too much, but that was fine because I was afraid the soup would have a medicinal taste. But it just tasted of really nice, really clean chicken. 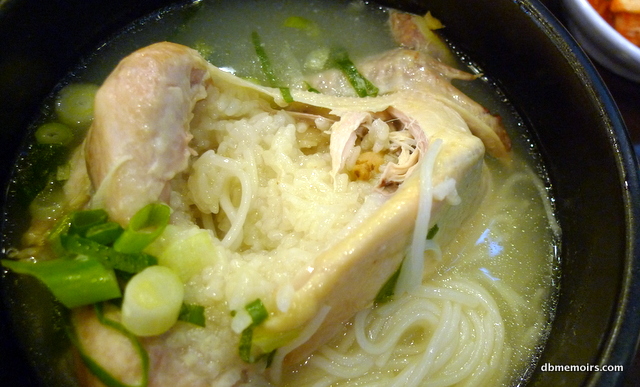 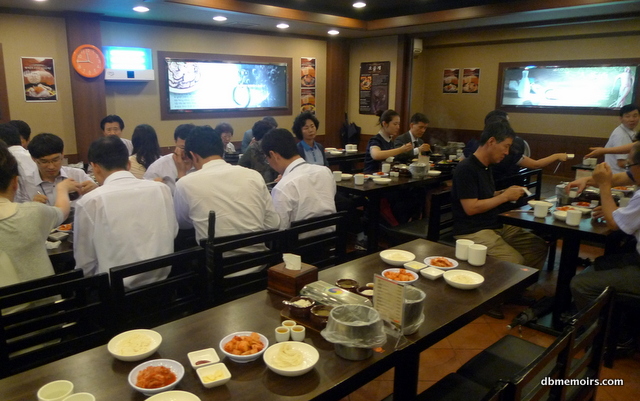 It was already noon when we walked past the massive Sejong Center for the Performing Arts... 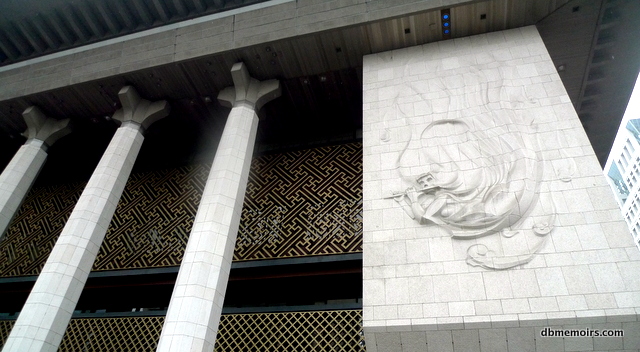 And crossed the road to Gyeongbokgung Palace. 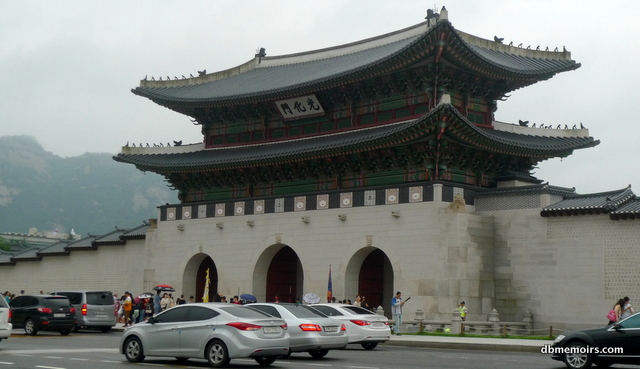 From "Korea Travel Guide" published by the Korea Tourism Organization: Built in 1395 as the main palace of the Joseon Dynasty (1392-1910) by the dyansty's founder King Taejo, Gyeongbokgung is the most comprehensive and grandest of the five palaces of the period.

It had been drizzling the whole morning, but when we entered the palace, it started to pour buckets. 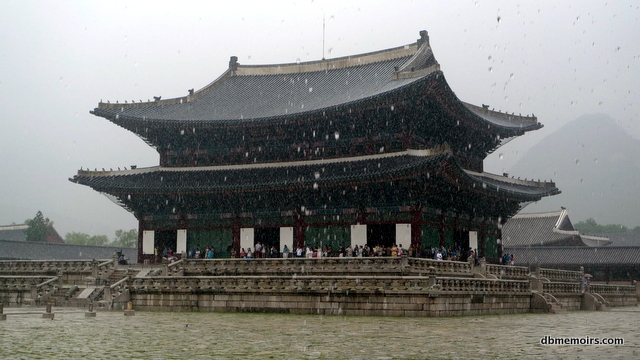 The interior was not super impressive. OK, there was a throne. 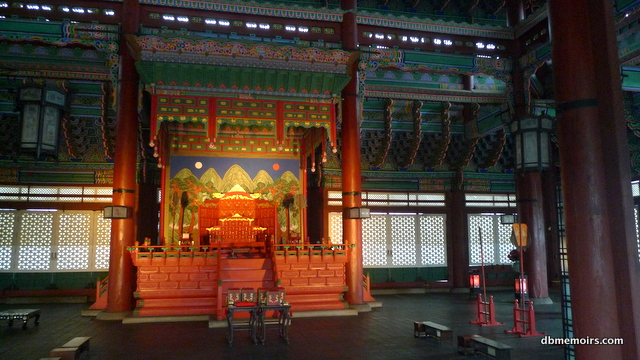 I did like the Chinese-style ding, though. Check out the face on the vessel's leg. 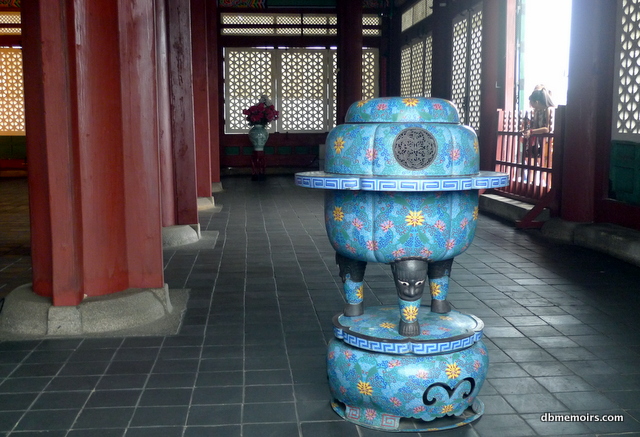 To be continued...
Posted by Unknown at 5:44 PM
Email ThisBlogThis!Share to TwitterShare to FacebookShare to Pinterest
Labels: food, korea, seoul, south korea, travel