based on the novel by

Cloud Atlas was the last English-language movie I watched last year, and the first book I finished reading this year. 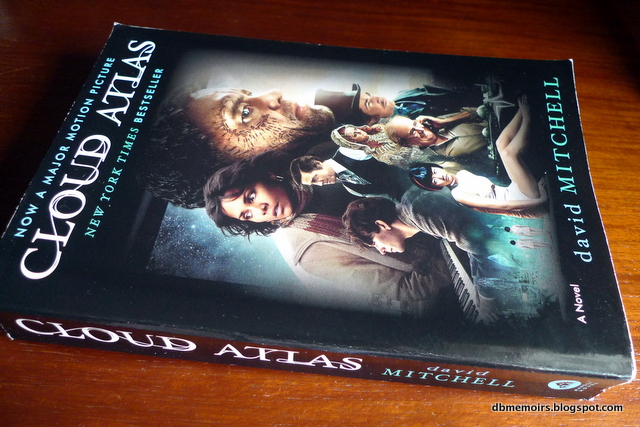 I was so enamored by the film that I immediately bought the book after coming out of the theater. The saleslady at National Bookstore apologized because they only had the movie tie-in version, but boy, did that turn out to be a good thing.

You see, the movie tie-in has David Mitchell's afterword, Based On The Novel By. An unexpected and wonderful bonus.

It was such a pleasure to read how he embraced the whole film-making process. I imagine that it wasn't easy to let go of something as personal and visceral as one's written work, and allow other people to do what they will with it. In fact, the film is not a strict adaptation of the novel. Except for the characters, I felt that the movie and the book were two completely different animals. Equally enjoyable but definitely not the same.

David Mitchell wrote: Anyway, film adaptations of novels are sometimes prone to failure because they are not too faithless but too faithful. Why spend all that effort producing an audiobook with pictures?

That's exactly what's wrong with most adaptations! That's why everyone who has read the book always ends up disliking the movie, because it's not what we expect. But aren't our expectations impossible to meet, anyway?

Mitchell: Perhaps where text slides towards ambiguity, film inclines to specificity... Perhaps a novel contains as many versions of itself as it has readers, whereas a film's final cut vaporizes every other way it might have been made...

And then he extols the virtues of film-making: Yet while a written scene can only bear so much detail, every last aspect about a filmed scene-- light, acoustics, the objects peopling it-- can, and should, be considered. And while a writer has only clumsy means of saying exactly how a given line is to be heard in the reader's head (italics and adverbs), a director gets to fine-tune the canonical delivery of that line and preserve it for all time.

That's it. From now on, I'm watching the movie first.
Posted by Unknown at 11:50 AM
Email ThisBlogThis!Share to TwitterShare to FacebookShare to Pinterest
Labels: art, books, movies