The best thing about our B&B, One Rover's Place, is its location. There are over a hundred hotels and inns in Puerto Princesa, but for exploring the city, I don't think any of them can beat One Rover's Place as home base.

I mean, all the restaurants I wanted to try were within spitting distance. Isn't that what's most important?

Our receptionist recommended Balinsasayaw's grilled chicken for lunch. Not bad for a quick, wallet-friendly meal. It wasn't as tasty as Bacolod's heart-stopping cholesterol-injected inasal but it was much better than Davao's disturbingly sweet and dry version.


We didn't know that balinsasayaw meant "bird's nest" until our waiter, Renger, told us. So then of course we had to order it. For fans of bird saliva, at that price it was practically a steal. And it was obviously very fresh.


Someone had a craving for stir-fried noodles. It was so-so, nothing great.


I wanted to try something new. Renger suggested the ranga-ranga which looked gnarly but had a delicate texture and flavor. I still don't know what it's called in English, but I know that it's a fairly common food item in coastal areas. I would order this again if I see it.


There's a lot of fresh seafood in the Puerto Princesa market (see previous post), so I was surprised that Balinsasayaw serves frozen fish. But Renger assured us that their grouper was of the best quality.


It wasn't bad at all, although I'm sure that my grandmother would think it's sacrilege to freeze such a beautiful specimen.


To wash it all down, I had fresh buko juice. I loved how neatly they cut the hole on top, but I wish that they had stashed the coconut in the chiller before serving it. Still refreshing, though.


At 420 pesos (US$10) per head, Balinsasayaw is not exactly cheap. But then I don't think that it's meant to be a cheap restaurant. It's more of a special occasion type of place and the prices reflect that. The food is hearty and satisfying, the servings are good for sharing, and the staff is friendly and efficient. 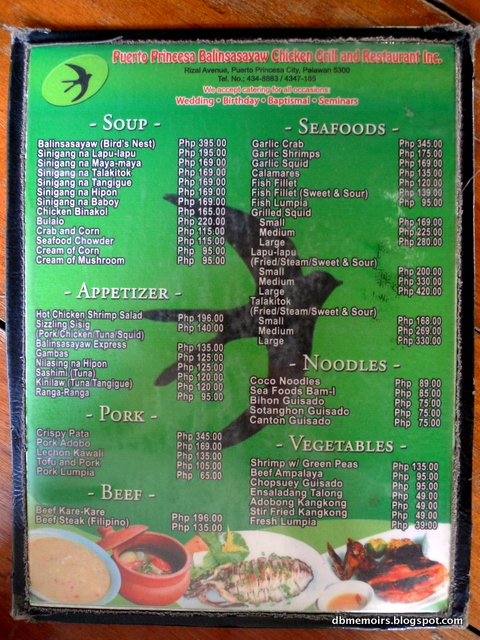 Check out the set menus. For a family who wants to have a more-than-decent lunch after Sunday mass, 170 pesos per person is not unreasonable-- with garlic crab! 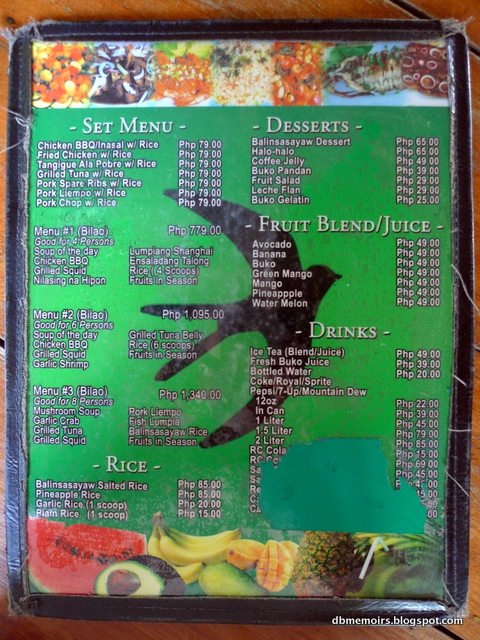 Right across from One Rover's Place is Kinabuchs which was perpetually the most popular restaurant in Puerto Princesa before Kalui became internet-savvy a few years ago. It's actually a sports bar and the ambiance is not as, um, wholesome as Kalui's or Balinsasayaw's, but it's a relaxed, happy place to have a beer, watch the World Cup or play some pool... or just eat.

The menu is a great mishmash of dishes from all over the country, as well as the so-called Puerto Princesa Specialties: crocodile and tamilok. And of course, there's a lot of sizzling, greasy, alcohol-absorbing bar chow.

We decided to have some manly meat, some seafood and to balance it out, a veggie dish.


I really enjoyed our dinner at Kinabuchs. Good food, good service. Its reputation as a Puerto Princesa institution is well-deserved. At 950 pesos (US$23) for two people, with rice and drinks, you can't call it a budget meal. But for the quality and quantity it's not expensive, either.

Ah, Puerto Princesa. Who'd have thought it would turn out to be a food trip?

Next time I want to try some Vietnamese food.

From 8 October 2012 to 11 October 2012, we ate at Noki Nocs, Kalui, Kinabuchs and Balinsasayaw. All are located along Rizal Avenue, on average a five-minute tricycle ride from the airport.
Posted by Unknown at 12:49 PM
Email ThisBlogThis!Share to TwitterShare to FacebookShare to Pinterest
Labels: food, hotels, palawan, puerto princesa, travel