I had been looking for John Le Carré's Tinker, Tailor, Soldier, Spy for months and months, so when I found this dog-eared copy at a secondhand bookstore in Kalibo last month for only PHP100 ($2.30), I was ecstatic! 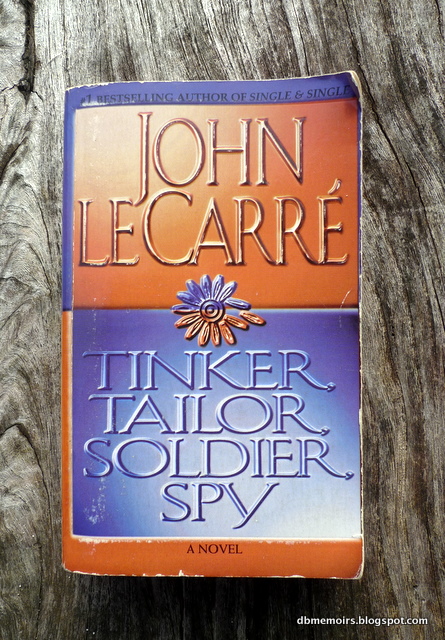 I must confess that I was never a great fan of the spy novel. I'd read the Jason Bourne novels, but only the ones by Robert Ludlum. And that was it. Spy movies I have no problem with, but somehow spy novels seemed to me tedious, hard to follow and overly detailed. Tom Clancy, anyone?

So it's strange that two of the last three books I read were spy novels. (The other one was The Innocent.) And yes, they were a bit tedious, hard to follow and overly detailed. But I liked them both. Both would make good movies haha!

Incidentally, I made it a point to read Tinker, Tailor, Soldier, Spy first before I saw the film, so no spoilers, please. Yes, yes, I know the story already, but we all know that the movie is never really the same, and rarely ever as good, as the book. Still, I'm really looking forward to seeing Gary Oldman, John Hurt, Ciaran Hinds and my new crush, Colin Firth, altogether in one arena.

(The King's Speech was on HBO today. Darcy, which is how I usually refer to Colin Firth, was marvelous.)

I'm not going to discuss the plot of Tinker, Tailor, Soldier, Spy here. And I'm not going to include an excerpt, like I usually do when I reviews books. Friends, just read the book or watch the film. It's an engaging story and worth your time and money.

But I will say this:

1. For a story that was written in 1974, it was surprising to see homosexuality mentioned in a generally macho genre. A gay spy during the Cold War? Gasp!

3. The whole time that I was reading this book, whenever I encountered George Smiley's name in print, it made me smile.
Posted by Unknown at 7:32 PM
Email ThisBlogThis!Share to TwitterShare to FacebookShare to Pinterest
Labels: books, movies